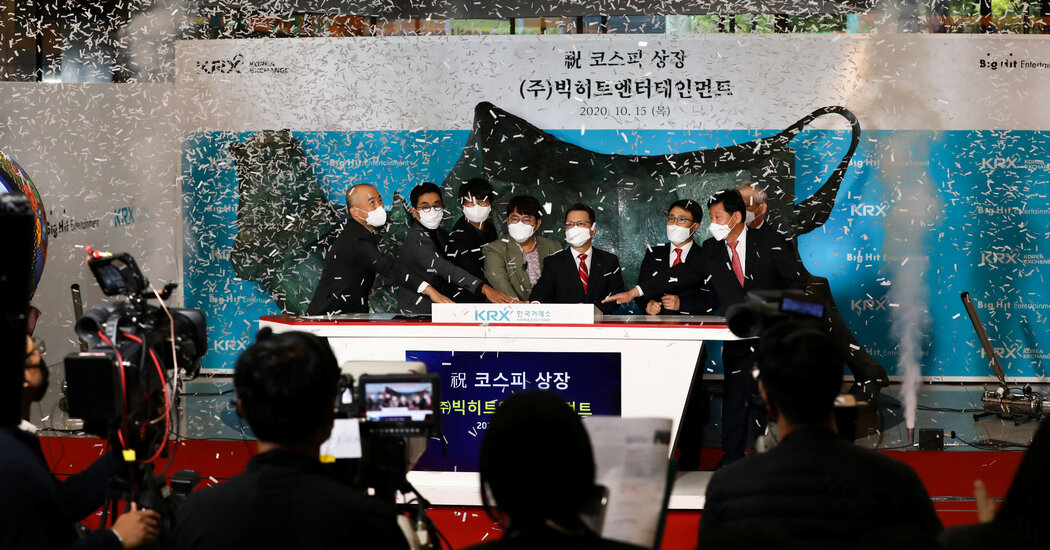 Shares in Big Hit, the management company behind the Korean boy band BTS, skyrocketed on their first day of trading in South Korea on Thursday, as investors rushed to get a piece of one of the world’s biggest musical acts.

The initial public offering by Big Hit, which derives almost 90 percent of its revenue from BTS, was the most anticipated South Korean debut in years, with hundreds of pre-orders for every share on offer.

Enthusiasm for the company is driven by the global success of BTS, which has become the biggest boy group since the Beatles thanks to the dedication of its tens of millions of fans, known as the Army.

The highly organized fans have used social media to help their idols climb to the upper heights of the music industry, smashing viewing records on YouTube and keeping the group’s singles at the top of music streaming rankings.

The seven-member band has ruled the pop charts in recent weeks, with two No. 1 songs on the Billboard Hot 100. An online concert over the weekend sold about one million tickets at prices starting at $45, stoking the already white-hot enthusiasm for Thursday’s listing.

Big Hit has been a particularly appealing target for South Korean retail investors who are desperate for big returns, as an economy hurt by the coronavirus pandemic has left few profitable places for people to put their money.

The combination of well-timed industry success and latent investor demand created ripe conditions ahead of Big Hit’s debut, making its founder, the longtime music producer Bang Si-hyuk, one of South Korea’s wealthiest individuals, with paper wealth of more than $3 billion on Thursday evening.

It has also enriched the BTS members themselves. Mr. Bang granted them more than 478,000 of his shares in an effort to strengthen relations with his primary moneymakers.

In the short term, expectations for Big Hit are likely to remain high, as fans and investors alike await the release of BTS’s new album, BE, in late November, and sales of merchandise and digital content continue to climb.

But while BTS is Big Hit’s greatest asset, it is also its Achilles’ heel. It remains to be seen just how long the group, whose oldest member is 27, can maintain its star power. One potential threat comes from South Korea’s mandatory 18-month military service for men. The first of the group’s members to report for duty must do so by the end of next year.

Some investors wonder whether Big Hit would be able to thrive without its marquee artists.

The company has sought to reduce that risk not only by expanding its stable of artists, but also by investing in digital content and services — such as its social media platform, WeVerse — that have allowed it to expand beyond music management.

The investment has already paid off. Even though the coronavirus forced BTS to cancel its sold-out world tour, Big Hit’s 2020 revenue has increased dramatically thanks to growing sales of digital content.