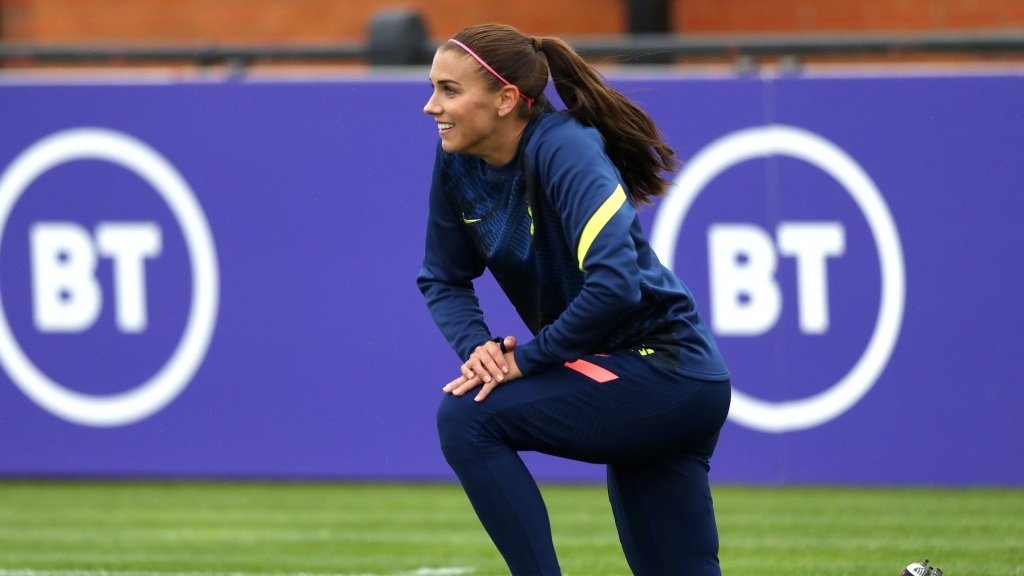 Alex Morgan surprised the world when she announced her move to Tottenham Hotspur in the FA Women’s Super League last month, the latest in a series of American players to go abroad this year. The 31-year-old has been out of action for over a year following injuries and the birth of her child, Charlie, in May. But Morgan is as hungry as ever to get back onto the field, training with her new team and watching from the sidelines with her daughter as she works to return to full fitness. As the 2021 Tokyo Olympics quickly approach, Morgan hopes to be ready to help the USWNT challenge for a fifth gold medal and her stint in London is the perfect place for the striker to get consistent playing time.

We caught up with the American star last week on behalf of GoGo squeeZ to discuss her recent move across the pond, the future of the NWSL and why she believes in the importance of youth sports participation in the U.S.

Your decision to play for Tottenham Hotspur in the FA Women’s Super League was obviously a big deal among fans and media alike. Why did you feel that now was the right time to make that move in your career?

I had to look at where I could get consistent training and consistent games. Unfortunately, with the NWSL, they had a plan to play for about 4-6 weeks and then shut down until next year, and with me coming back from pregnancy — and it being even more delayed with the Olympics postponed and the pandemic lingering on — it’s been about a year since I last played in a competitive environment. I needed to find a way back to the field and this was the best way to make it happen, knowing that there wasn’t really an avenue to do that in the U.S.

I know you’re getting back to full fitness after having your daughter — congratulations by the way. Where are you on the recovery front and how are you feeling about playing again after more than a year away?

I’m really excited to play. I wouldn’t have really pulled my family away from each other if I didn’t really need to do this for my career, so it is very important for me to get back onto the field and to feel good again, to get my touch back, my speed back and kind of my tactical mindset as well. I think over the last two weeks, my first introduction to team training has been sort of up and down because of little things here and there that have arisen within my body that would be expected after taking almost a year off of playing. So that has delayed things but nonetheless, I’m still really excited to get on the field and I’m doing everything I can to do so.

Recently, we’ve also seen Rose Lavelle, Sam Mewis, Tobin Heath and Christen Press move to England as well. Some people were mixed in their opinions on how this would affect the NWSL with so many of its stars leaving. How do you see these moves impacting the growth of soccer in the U.S. and impacting the USWNT at all?

Well, I think the NWSL is one of the best leagues in the world and I think it is one of the most competitive leagues across the board. I think a lot of the leagues around the world are quite imbalanced, but the NWSL creates more of a level playing field throughout the teams. And I think in the long term, this is not going to negatively affect the growth of soccer in the U.S. The NWSL is now the third league in the U.S. and has obviously lasted much longer than the first two leagues, but even the folding of the first two leagues had too much of a negative effect on the growth of soccer. I feel like in 2012, when we won the Olympics, we didn’t have a league at that moment. Now, I feel like the league is super important in identifying talent and getting Lynn Williams, Jessica McDonald and other players that you wouldn’t have otherwise found without a domestic league.

My hope is that the NWSL has a solid schedule next year, is encouraging players to want to play there and that players feel comfortable playing in the U.S. leading into the Tokyo Olympics in 2021. I think that there’s some things in the U.S. that are really hurting the NWSL and a lot of U.S. sports in general with the handling of the pandemic, but the NWSL is trying to make the most of what they can do and so, I’m really hopeful for the future. And obviously, I will go back to playing the NWSL whether that’s next season or not, my future for soccer is in the U.S. and I want to continue supporting the domestic league.

Let’s talk about this new initiative you are working on with GoGo squeeZ to reimagine youth sports and make them stronger and more inclusive. Why do you think youth sports participation is so important?

I was really fortunate growing up to have parents who encouraged me to play all different sports — I’m a huge advocate of having kids play multiple sports and one of the reasons is to keep it fun and not forget the important parts of being a kid. To create friendships on a team, to really gain these sort of skills in sports that you can’t gain otherwise — and I’m not talking about soccer skills or technical skills, I’m talking about teamwork and leadership and time management and dedicating yourself to something and following through with something. I feel like sports taught me so much of that without me even knowing as a kid.

Partnering with GoGo squeeZ on this is so important to me as well because I have seen firsthand so many kids drop out of sports, because of their parents not being financially able to have them continue or for them to not feel like they belonged anymore because it wasn’t fun or they found other things to take up their time.