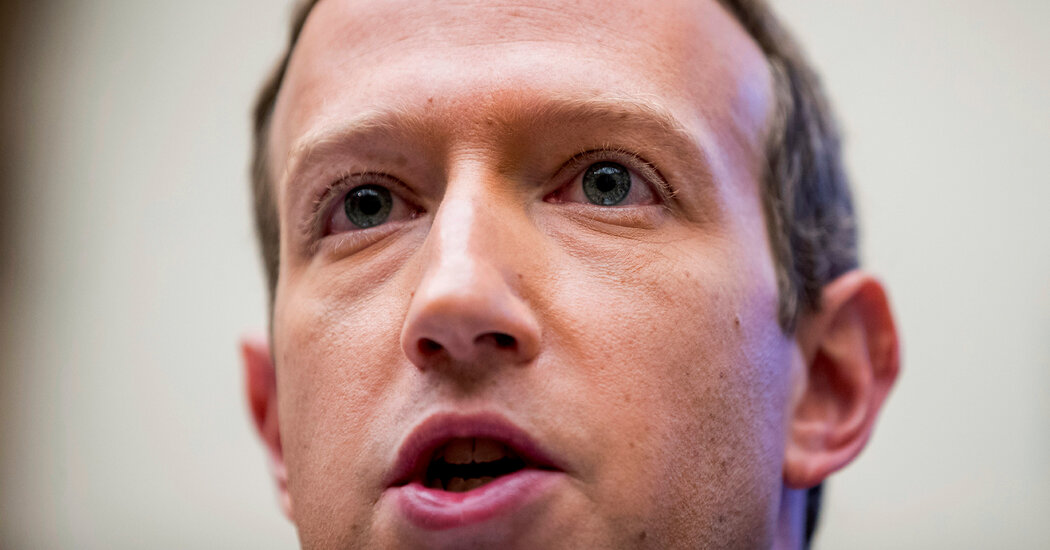 When Facebook’s founder and chief executive, Mark Zuckerberg, told me two years ago in a podcast interview that Holocaust deniers might not mean to lie, my first instinct was to reply, “That’s completely idiotic.” I managed to stifle myself.

In our interview, I let him explain how he wanted to govern the giant social media platform he alone controlled.

As he talked, his view of the proliferation of underbaked conspiracy theories, hoaxes and misinformation on his site became troubling.

“Look, as abhorrent as some of this content can be, I do think that it gets down to this principle of giving people a voice,” he said, while at the very same time noting that speech that created an unsafe environment might indeed be blocked by Facebook.

Mr. Zuckerberg defended the decision to allow the views of the persistently vile Alex Jones, whose lies and conspiracy-mongering about the mass murder of children in the Sandy Hook school shooting had proliferated all over Facebook at the time and who seemed to delight in breaking all the rules that the company had laid down. When I asked why Mr. Jones had not been booted off Facebook — which Facebook insisted it would not do and then did not long after — Mr. Zuckerberg wanted to change the frame of reference.

To the Holocaust. Uh-oh, I thought. Still, he persisted.

“I’m Jewish, and there’s a set of people who deny that the Holocaust happened,” he said.

“I find that deeply offensive. But at the end of the day, I don’t believe that our platform should take that down because I think there are things that different people get wrong. I don’t think that they’re intentionally getting it wrong, but I think — —”

I had to interject one bit of sanity to try to stop this runaway train of thought. “In the case of the Holocaust deniers, they might be,” I said, before deciding to just let that whopper chug on by. “But go ahead.”

And go ahead he went, driving himself right into a wall, with me watching the accident unfold in quiet horror.

“It’s hard to impugn intent and to understand the intent,” he said. It is not, I thought.

While he later tried to clarify his remarks, sending me an email that said, “I personally find Holocaust denial deeply offensive, and I absolutely didn’t intend to defend the intent of people who deny that,” it was exactly what he had done.

And which he continued to do, until Monday, that is, when it finally occurred to Mr. Zuckerberg that perhaps he had not thought it through and decided Facebook would now “prohibit any content that denies or distorts the Holocaust.”

“I’ve struggled with the tension between standing for free expression and the harm caused by minimizing or denying the Holocaust,” he wrote in a Facebook post. “My own thinking has evolved as I’ve seen data showing an increase in anti-Semitic violence, as have our wider policies on hate speech.”

The move comes just after Facebook announced last week that it is purging content from QAnon, the bizarre and growing conspiracy theory movement.

Is this woke Mark a good thing? I am not sure. This evolving Zuckerberg feels more random than rigorous, based less on a consistent theory of how to police the platform than playing an endless and exhausting game; and, more to the point, motivated to look busy because of a possible change in political power that could spell trouble for the Trump-friendly Facebook. Is this new tune simply being sung for a coming Biden presidency?

I have no idea. But what is clear is that Mr. Zuckerberg’s realization of all the ways that social media can hurt us continues to be painfully slow. The enormous costs of this process, which have never actually accrued to him, will still be borne by the rest of us. The world has to repair the damage from the hate that he has allowed to thrive under the false banner of free speech on the network he built.

Until Mr. Zuckerberg decides to really run the place, Facebook will remain a perfect platform for anything, because it stands for nothing.

Since that interview with me two years ago, Mr. Zuckerberg has talked to a lot of reporters, but has declined to do another interview with me, although I have asked time and again. That’s a shame, because I have a lot more questions for him. Such as:

Why did you never build firebreaks that could have dampened the dangerous fires of disinformation that you have let burn out of control?

Were you motivated by a need to expand the business without limit or by a real belief that human beings would behave if you let them do anything they wanted?

And most important, now that we agree that Holocaust deniers mean to lie, can we also agree that we need to remake the nation and also Facebook so that we can have a real dialogue built on community? You always said that was your goal, right?

Or, after all this time and pain, is that completely idiotic?