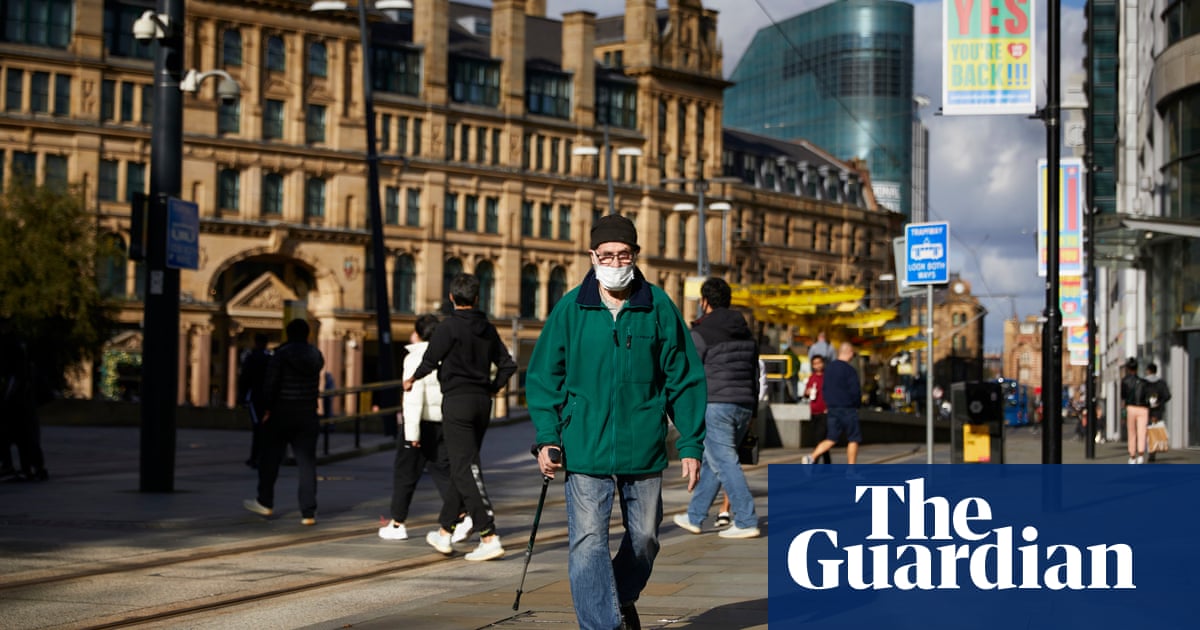 Deaths from coronavirus will continue to rise for at least three weeks and the NHS risks being overwhelmed unless the strictest curbs are imposed on another 4 million people, leaders in northern England have been told.

A decision on whether to extend tier 3 restrictions – closing pubs and restaurants and banning household mixing – to Greater Manchester and Lancashire is expected on Thursday.

In an increasingly fractious standoff, Andy Burnham, the mayor of Greater Manchester, accused ministers of putting pressure on northern regions to accept a “morally wrong” and “fundamentally flawed” system without sufficient financial support for individuals and businesses. He said imposing tier 3 lockdown measures would “surrender people to certain hardship in the run-up to Christmas”.

Local leaders held meetings with England’s deputy chief medical officers, Jenny Harries and Jonathan Van-Tam, on Wednesday night, described by one Whitehall source as “ramming home the science” behind the need to increase restrictions. They were warned that “things are bad, will continue to get worse and overwhelm the health service if something doesn’t happen soon,” a source said.

Van-Tam is understood to have stressed that “things will continue to get worse for three weeks” after any extra measures are imposed, owing to delays in the impact of new rules, and said that the longer the delay in action, “the higher the peak before it starts coming down”.

Local leaders left the meeting unimpressed that there were no new commitments for increased financial support, which is the key sticking point in the discussions.

Chris Green, the Conservative MP for Bolton West, who resigned as a ministerial aide over the government’s approach, said it seemed a “very confused picture to me that we’re going to go into tier 3 without an explanation of the science, the evidence, to say why that has to happen.”

The UK recorded 19,724 new coronavirus cases on Wednesday, a new daily record and an increase of almost 2,500 on the figure for the previous day. About 4,650 people were hospitalised with Covid-19, 516 of them in ventilator beds, and 137 were confirmed to have died.

On Monday Boris Johnson unveiled a new three-tier restrictions system but placed only the Liverpool city region in tier 3, closing pubs and banning households from mixing. Labour accused him of failing to curb the spread of the virus.

Council leaders and MPs told the Guardian it seemed inevitable that the government would unilaterally impose tier 3 measures on Greater Manchester and Lancashire by Friday despite a week of furious opposition from metro mayors.

The decision would extend the tightest level of restrictions to more than 5.5 million people in north-west England and could trigger a legal challenge.

Though the government has the ability to impose regional measures, one government source said it was reluctant to do so because of the potential impact on compliance. “If Burnham says he does not agree with this then that could have a serious impact,” the source said. “But it’s a very scary picture in Greater Manchester.”

Downing Street said it believed tier 3 measures would have a “significant impact”. Johnson’s spokesman said: “Of course, the government does have the ability to impose measures if it was felt that was what was needed to reduce transmission. If at all possible, we want to build the maximum local consensus.”

Earlier on Wednesday, Burnham said he would not be “pressurised into accepting” a move from tier 2 to 3, describing the measures as a “penny-pinching approach to the pandemic”. He said: “The economy is already on the brink and putting us into tier 3 without any support would in many ways push us over the edge.”

Burnham and Steve Rotheram, the metro mayor of the Liverpool city region, said they would consider legal action against the government’s “discriminatory” furlough scheme if tier 3 restrictions were imposed without increased financial support.

Burnham said he would not accept tier 3 measures unless the furlough scheme covered 80% of employees’ wages as it did during the spring peak, instead of 67% as it has promised this time, and unless self-employed workers got the same support. He called for a significant business support scheme of grants for those directly affected by the pandemic, as well as increased support for test and trace for all local authorities.

The 10 leaders of Greater Manchester’s local authorities – including the Conservative leader of Bolton council – also said they would not accept further restrictions without additional Treasury funds. Most of the council leaders said they would prefer a nationwide circuit breaker if it came with more cash for residents and businesses.

The Conservative mayor of the West Midlands, Andy Street, demanded that the financial support unveiled by the chancellor, Rishi Sunak, last week be significantly increased and expanded nationwide, not just to areas in the tightest level of restrictions.

It emerged on Monday that the Scientific Advisory Group for Emergencies (Sage) told the government that the UK faced a “very large epidemic with catastrophic consequences” unless it took immediate action by imposing a two-week circuit breaker to reduce the spread of coronavirus, but was ignored.

England’s chief medical officer, Prof Chris Whitty, admitted this week that the base level of tier 3 restrictions would “not be sufficient” to tackle the disease.