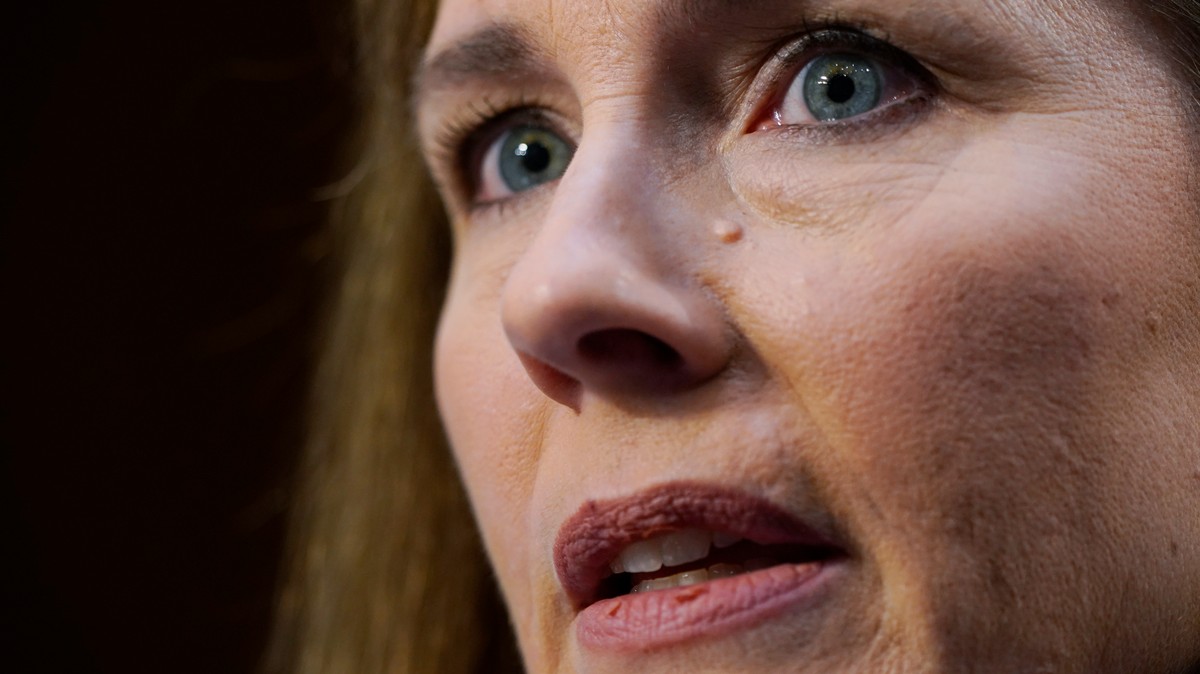 Judge Amy Coney Barrett declined to say whether a president can pardon themselves of a crime on Wednesday, the third day of the hearing for her confirmation to the Supreme Court.

“Do you agree no one is above the law? Not the president, not you, not me?” Sen. Patrick Leahy, a Democrat from Vermont, asked.

“I agree, no one is above the law,” replied Barrett, who has served on the U.S. Court of Appeals for the 7th Circuit since 2017.

“Does a president have an absolute right to pardon himself for a crime?” Leahy followed-up. “We heard this question after President Nixon’s impeachment.”

“Sen. Leahy, as far as I know, that question has never been litigated. That question has never arisen,” Barrett said. “That question may or may not arise, but it’s one that calls for legal analysis of what the scope of the pardon power is. So because it would be opining on an open question when I haven’t gone through the judicial process to decide it, it’s not one on which I can offer a view.”

“But you’re willing to say that no person, not you, not me, not a president, is above the law?” Leahy responded. “I find your answers somewhat incompatible but those are your answers. You have a right to say what you want.”

Throughout her hearing in the Senate Judiciary Committee, Barrett has repeatedly demurred from answering questions that touch on what she has deemed open legal or political controversies. It’s standard practice for Supreme Court nominees to punt on questions that could arise before them while they’re on the bench of the nation’s highest court, but it has clearly rankled Democrats on the committee during Barrett’s hearing.

Sen. Cory Booker, Democrat of New Jersey, also asked Barrett on Tuesday if a president could pardon themselves; she, again, declined to answer, to Booker’s apparent lack of surprise.

“It is an issue that our president may intend to pardon himself for future crimes or past crimes,” Booker told her.

The question of whether the president has the power to pardon himself remains a debate among legal scholars. But in 1974, the year Richard Nixon left office, the Justice Department issued an opinion saying that the president cannot pardon himself “under the fundamental rule that no one may be a judge in his own case.”

Barrett agreed that no one is above the law. But she added, there’s nothing the Supreme Court can do to enforce its ruling.

“As a matter of law, the Supreme Court may have the final word. But the Supreme Court lacks control over what happens after that,” she said. “The Supreme Court, and any federal court, has no power, no force, and no will, so it relies on the other branches to react to its judgements accordingly.”

It’s a debate that touches on one of the darkest periods of American history. In 1832, two years after the passage of the Indian Removal Act, the Supreme Court found that Georgia couldn’t seize land that had been guaranteed to the Cherokee Nation by treaty, after it was discovered that there was gold on the land. But Georgia refused to obey that ruling.

“John Marshall has made his decision,” President Andrew Jackson, referring to the Supreme Court’s chief justice, reportedly said. “Now let him enforce it.”

Within a few years, Jackson sent troops to remove the Cherokee people from their land. The Trail of Tears, the forced relocation of Native Americans, ultimately led thousands to die.

Trump has repeatedly said that he admires Jackson.

Sen. Dick Durbin, Democrat of Illinois, also followed up on Barrett’s refusal, on Tuesday, to say if a president has the authority to postpone an election, which Trump has suggested that he’d like to do.

“Is that still your response?” Durbin asked.

“I’ve given that response to every hypothetical I’ve been asked,” Barrett said, adding, “It would be inappropriate for me to make a comment.”