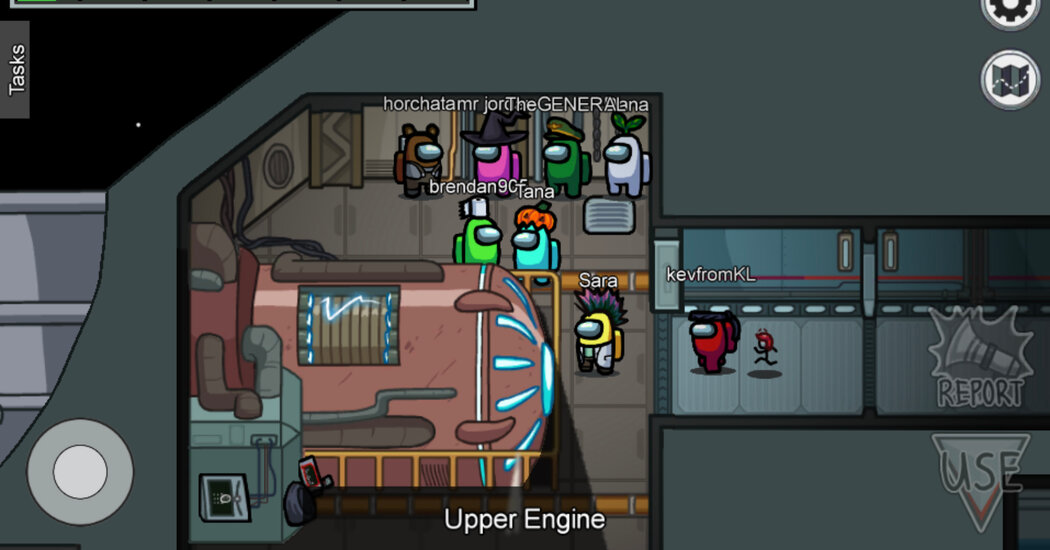 When an indie game company created Among Us in 2018, it was greeted with little fanfare. The multiplayer game remained under the radar as many games do — until the summer of the pandemic.

Eager to keep viewers entertained during quarantine, Chance Morris, known online as Sodapoppin, began streaming the game, created by InnerSloth, to his 2.8 million followers on Twitch in July.

By mid-September, Among Us caught on like wildfire. Suddenly major YouTube stars, TikTok influencers and streamers were playing it. PewDiePie, James Charles and Dr. Lupo have all played the game for millions.

Among Us is a multiplayer game where between four and 10 players are dropped onto an alien spaceship. Each player is designated a private role as a “crewmate” or “impostor.”

Crewmates must run around the ship and try to complete a set of tasks while trying to root out and avoid getting killed by the one or several impostors. Players can be voted off the ship, so each game becomes one of survival: Successfully vote off the impostors, or complete all your tasks to win. It’s simple, cartoony and easy enough for a five-year-old to play on an iPhone.

The young fans of online influencers weren’t just watching Among Us streams, they began playing the game too. Millions of teenagers and kids across the country have become hooked on Among Us, which has begun to serve as a default social platform for young people stuck in quarantine.

“A few weeks ago I went from not hearing anything about it to hearing everything about it everywhere,” said Judah Rice, 16, a high school student in Texas. “People are texting about it, I know people who are on dedicated Discord servers and Among Us group chats. I have friends who get together all the time and play it.”

Among Us Discord servers began cropping up in early September. In one, more than 98,000 teenagers connect, socialize, discuss and play the game. Benson, a 13-year-old administrator of the server, said that there are often 30 to 40 different Among Us games at any time of day happening over voice chat channels in the server. “Everyone is aged 13 to 20,” he said. “My friends, if their teacher doesn’t show up to their online class, they play, it’s a way to pass the time when you don’t have anything else to do. Since we can’t really congregate in a public area like the park, Among Us allows us to be online social distancing.”

Among Us is very different than other highly social video games like Fortnite, for instance. It’s more similar to a board game like Monopoly, or a party game like Werewolf, where players need to read personalities and determine if they’re being lied to in order to win. The large group size makes it easy to invite new friends into the group.

“You can meet a lot of people from Among Us, I’ve made a few friends off of it,” said Juan Alonso Flores, 17, a high school student in Florida. “Once you start playing with the same people you start getting to know each other. You get their phone numbers, Discord tags.”

It’s not just teenagers who are bonding over the game. Adults who can no longer hit a bar or swing by a party after work are also finding community through Among Us. Ricky Hayberg, 36, writer and host of Internet Today, a culture and tech YouTube channel, said he’s developed stronger friendships with people he met through playing Among Us over the past two months than those he’s known offline for years.

“There’s more natural conversation that arises from it. It’s more of a party game. You’re kind of just hanging out with friends and the game is secondary,” Mr. Hayberg said. “To excel at the game, you have to know if people are lying, telling the truth and their general personality.”

The game’s continued success is further propelled by a never-ending stream of Among Us-related content on the internet. Twitter accounts like No Context Among Us and Among Us Struggle Tweets publish memes about the game to hundreds of thousands of followers. Videos on TikTok including the Among Us hashtag have amassed more than 13 billion views.

“The hype keeps growing because everyone is playing it,” said Nicole Draper, 17, who posts Among Us memes on Bruhloon, her Instagram meme page. “My TikTok For You page is flooded with Among Us memes. People are making parodies and voice-overs of Among Us scenes. It grew bigger than any other game.”

Throughout the game’s ascendance, streamers on Twitch continue to power it all. “If anyone had any doubt that Twitch streamers were influencers before now, we’ve proven that to be true,” said Erin Wayne, director of community of creator marketing at Twitch.

Twitch fans have watched more than 200 million hours worth of Among Us gameplay on the platform so far this year. Nathan Grayson, a writer at gaming site Kotaku, said that the game was uniquely designed in a way that makes it far more entertaining to watch than your average first person shooter game.

Viewers get to see influencers let their guards down and express how they really are. “The game is about deception and the personalities of people playing,” Mr. Grayson said. “It brings back the spirit of being around your friends. It’s designed for streamers to play off one another and they can also have streams where all of them are streaming on separate channels with their audiences speculating on chat about which person is an impostor.”

Phil Jamesson, 28, a comedian who streams on Twitch, said that the game is similar to a series like “Hot Ones,” where fans get to see their favorite celebrities drop the facade as they struggle to tolerate increasingly spicy chicken wings.

“There’s a barrier that gets lowered when there’s heightened emotions. When someone is accusing you of killing a friend in the game, you get a peek into how they actually are, as opposed to how they want to present themselves,” he said.

Already, people are leveraging excitement around the game for political ends. MoveOn, a progressive advocacy organization and political action committee has been streaming Among Us games on Twitch with organizations like Justice Democrats and Crooked Media, and well-known activists to encourage young viewers to vote.

“Virtual organizing is really popping off right now,” said Cameron Kasky, 19, a student and activist. “Among Us is a great place to talk about really anything you want to get out there. You’ve got people’s eyes and attention and the game is not too complicated where it’d be distracting to talk about voting. It leaves the viewers visually engaged while you talk about whatever you want.”