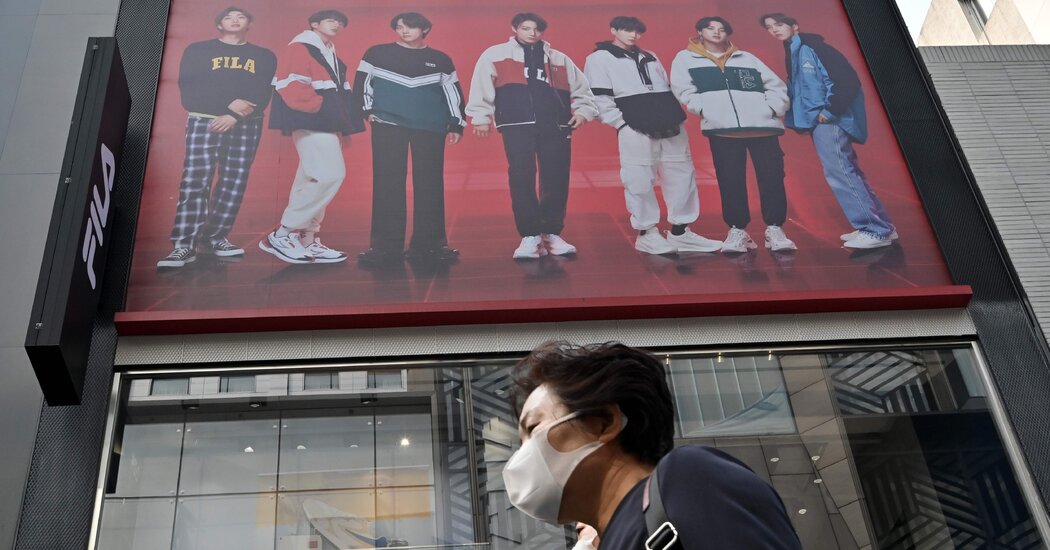 It seemed an innocuous remark from a wildly popular boy band known more for its open-armed inclusiveness than for any overt provocation.

But when the leader of the Korean pop group BTS acknowledged the shared suffering of Americans and Koreans during a recent ceremony commemorating the Korean War, internet users in China wasted no time registering their offense.

Chinese social media filled with outrage that the BTS leader, Kim Nam-joon, who performs under the stage name RM (formerly Rap Monster), did not also recognize the sacrifices of the Chinese soldiers who fought on the side of North Korea.

Then came a familiar dance for multinational companies doing business in China: Two prominent brands removed any trace of their collaborations with the band on Chinese websites.

First, a glossy special-edition purple smartphone made for BTS disappeared on Monday from Samsung’s Chinese website and other e-commerce platforms in the country.

Hours later, posts mentioning BTS appeared to have been scrubbed from the official Weibo account of Fila, the sportswear company. BTS has been a brand ambassador for Fila since 2019.

By Monday night, South Korean news outlets had reported that Hyundai Motor Group, the South Korean automaker, had removed advertisements and references to BTS from its Chinese social media accounts. BTS released a song in August to promote the launch of Ioniq, Hyundai’s line of electric vehicles, and had been a partner with the automaker since 2018. A video advertisement featuring the group still appeared on Hyundai’s Chinese website as of Monday night.

The automaker had previously ran into issues in China over different political tensions, when in 2017 sales dropped more than 60 percent there after South Korea strengthened its missile defense system in response to nuclear testing in North Korea.

Their moves seemed intended to head off the potential for the kinds of boycotts and other angry steps that Chinese consumers have taken against brands deemed to have run afoul of patriotic sentiment.

The events began during a virtual awards ceremony on Oct. 7, when the Korea Society, a New York nonprofit organization, presented BTS with an award that recognizes advancements to U.S.-Korean relations.

During the ceremony, RM said in reference to the Korean War, which began 70 years ago: “We will always remember the history of pain that our two nations shared together, and the sacrifices of countless men and women.”

While perhaps 200,000 or more South Korean soldiers and about 37,000 American soldiers died in the war, in addition to millions of civilians, 180,000 Chinese soldiers also perished, according to China’s accounting.

After the social media storm over the band’s perceived slight, Zhao Lijian, China’s deputy director of foreign affairs, weighed in.

“I’ve noticed related reports, and also the reaction of Chinese netizens,” he said when asked by reporters about the issue at a news briefing on Monday. “We should learn from history and look toward the future by cherishing peace and advancing our friendship.”

The Global Times, a fiercely nationalistic Chinese state tabloid, reported extensively about the BTS backlash, saying the group’s members should have recognized even the losses by an ally of their native country’s longtime enemy. The band’s comments, the tabloid said, reflected a “one-sided attitude” and “negated history.”

The hashtags “there are no idols that come before my country” and “BTS humiliated China” were trending in China.

Jolly Liu, a 21-year-old medical student in Guangzhou, said she was reconsidering her support of the band. In a phone interview on Monday, she said she was angered by its comments, which she had learned about after watching a live-streamed video of a BTS concert on Saturday.

“We can’t force them to have the same political views as us, but since you get our money and support over here, then you should take note of that and respect every country,” she said.

Others said they felt that the band members, as South Koreans, were entitled to their own views, though they perhaps should have kept quiet about it.

Qin Xiaxin, an internet user in Wuhan, said in a phone interview on Monday that she felt proud that her grandfather had fought in the war against Americans and found BTS’s comments inappropriate, believing they should have avoided political issues.

“We are from two countries, so we will have our differences when we encounter issues involving the sovereignty of our respective countries. That is for certain,” she said. “Because there isn’t anyone who doesn’t love their country, right?”

Some said they had trouble seeing what was so offensive. Charlene Liu, a 21-year-old student in Shanghai, wrote on Weibo that it would be unnatural to mention historical enemies during a war tribute.

“China and South Korea fought on opposite sides. Surely there wouldn’t be a single South Korean who would commemorate the war by thanking the Chinese,” she wrote on Sunday. “If the whole world has to care about the feelings of the Chinese, couldn’t we also try to understand how Koreans feel?” (She added that she wasn’t a BTS fan.)

The controversy comes just days before Big Hit is set to go public in Seoul in an initial public offering that is expected to value the company at up to $4 billion.

BTS is just the latest in a long line of international celebrities and brands that have found themselves on the wrong side of China’s government and consumers.

After Dolce & Gabbana released an ad containing stereotypes many found racist and offensive, Chinese social platforms were flooded with videos of consumers burning and destroying the fashion brand’s products.

Companies have also pulled products after state news outlets reported that they had hurt national pride. The luxury brands Coach, Givenchy and Versace apologized in 2019 for T-shirt designs that appeared to show Hong Kong as a separate territory, interpreted as undermining Chinese sovereignty.

Gap apologized in 2018 after a T-shirt with a map of China did not show Taiwan, parts of Tibet and islands in the South China Sea that, in Beijing’s view, belong to China.