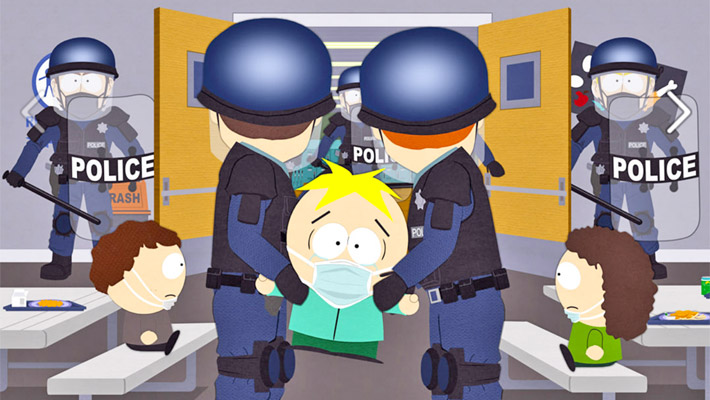 South Park: The Pandemic Special (Comedy Central/MTV 8:00pm EST) — Trey Parker and Matt Stone are back with an hour-long episode to, uh, deal with the pandemic. It’s about time that someone dealt with it, right? Other than a “making of” video, the dynamic duo’s remained pretty close-lipped on what we’ll see tonight, but we can expect all of 2020 to hit the audience in the face.

American Murder: The Family Next Door (Netflix documentary film) — Director Jenny Poppelwell cobbled together a feature-length examination of what happened after Shanann Watts and her two young daughters disappeared in Colorado in 2018. In short, Chris Watts confessed to murdering his family, but he did so in a few different ways, and this film aims to give a voice to the victims of his crimes. Through archival footage, home videos and law enforcement accounts, Poppelwell paints a portrait of a collapsing marriage and the police investigation that followed.

The 100 (CW, 8:00pm EST) — Is this really the final battle? After loads of fighting and loss, it might be that time for Clarke and her friends.

And in case you wanted to catch up on what happened last Wednesday:

Enola Holmes (Netflix film) — Netflix loves Stranger Things‘ Millie Bobby Brown, who’s now making her turn as Sherlock Holmes’ younger sister Enola Holmes. As a bonus, The Witcher‘s Henry Cavill is onboard to play Sherlock with Sam Claflin stepping in as Mycroft Holmes, and between the two of them, they have the fancy hair and twirling-of-mustaches quotient covered. Fleabag director Harry Bradbeer should make this an even more interesting affair, especially given the story: after Enola’s mother (Helena Bonham Carter) disappears without a trace on her daughter’s sixteenth birthday. Sherlock and Mycroft determine to ship the teen off to finishing school, where she’d become a “proper” lady. She’s not having it and strikes out on her own find her mother.