What? Why? To the uninitiated, these were the perfectly natural questions asked when it became apparent that I was going to assemble a group of people to try and buy the Batmobile that served as the focal point for the half-time entertainment during the 1991 AFL grand final. Yes, the gawkish and gigantic blue car; the one that wheeled Angry Anderson into VFL Park to belt out a never-to-be-forgotten rendition of his anthem Bound for Glory while a parade of sporting champions watched on in bewilderment.

Even writing that paragraph, I appreciate how bonkers this sounds. But to those who get it – especially fans of a certain age – the enterprise did not need as much explaining. Like me, they understand that footy fandom is inherently an overwrought endeavour; rationality seldom has a place. That is a big part of why growing up in Melbourne is so charming: you do not need to explain yourself when it comes to how you follow your club.

That my club is Hawthorn informs this story. The day the Batmobile made its appearance marked the end of a famous era, the fifth time the brown and gold won the flag in nine seasons. On one hand, I’m lucky to (just) remember the end of that stretch. But having just turned seven the month before that afternoon in 1991, it became the game I would return to over and over with my little brother, watching it most days before school. We knew every word of the of the McAvaney/Cometti call by heart; every advert and interview. In lieu of seeing the Hawks enjoy success in the Septembers that followed, the day lived on as our substitute, not least the conspicuous half-time performance.

No, this is not going to be a time-share road car doing laps of Chapel Street on a Saturday night

As adolescence gave way to adulthood, my own road led me to a community perfect for my obsessive tendencies – a website, Hawk Headquarters. An enthusiastic online forum turned into a brilliant standing room bay where we would (and still do) gather for games at the MCG and sing all afternoon. When in 2006 the Batmobile showed up on eBay, our crew did not need much encouragement. However, due to a combination of youth and incompetence, we missed out. In the years that followed, I pledged that if the opportunity came up again, well, you know. And last week, there it was, for auction once more.

Despite the different paths our lives have taken, the bond between our lot remains strong – we have routinely been each other’s groomsmen and closest confidants. So for this, we were in. However, instead of going for $7,000 as it had 14 years ago, this time the asking price was in excess of $20,000 with a week to go. Reinforcements were going to be required and they arrived in the form of other faithful students of the game (even some non-Hawks) who understood, dare I say it, the cultural and historical significance of the big blue Valiant, along with the network of man-about-town Mark “Hawk” Hawthorne. All told, 33 prospective owners were ready to be equal shareholders if we won.

The auction was a tamer affair than expected: our bid of $25,300 – made half an hour before the final siren – was enough to put us into the lead. At that moment, I was atop the pavilion at Lord’s commentating the final of the English domestic cricket season, trying to remain professional; avoiding my exploding phone. But the news being relayed to me was good: we had done it. 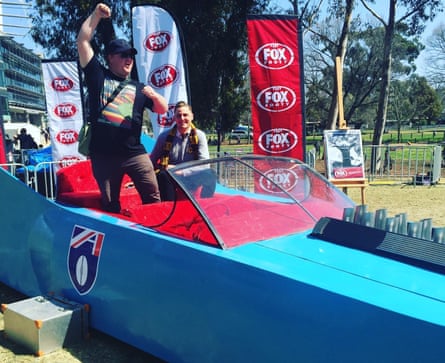 Now what? Well, that’s the easy bit. No, this is not going to be a time-share road car doing laps of Chapel Street on a Saturday night. Instead, the objective of the Batmobile consortium – some more 1990s jargon – is to make sure that it is preserved. When in 2015 the AFL borrowed the 7.4m car for grand final week – with Hawthorn again playing West Coast Eagles in the decider, as they did in 1991 – there were long queues for fans to have their photo in the car posing like Angry. It is only right that as many footy people as possible can do that too, and, perhaps, that the sheer novelty of the Batmobile can also be drawn upon to assist in raising money for local sports clubs clobbered by Covid-19.

But that comes later. For the time being, a group of diehards, who probably wish the game was played more like it was in 1991, have a story to tell: we co-own the bloody Batmobile. Yes, the premise is as ridiculous now as it was three decades ago. And sure, this might end up more trouble than it has been worth. But since when has any of that mattered to footy people? As far as we are concerned, we are Bound for Glory and could not be happier.