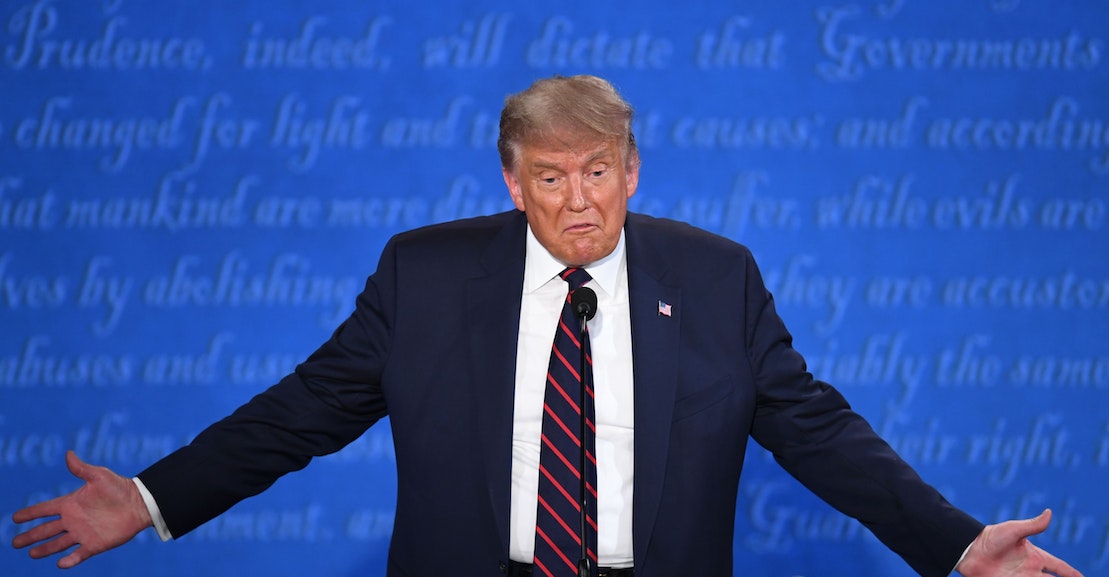 Pity the transcriptionists. From its very first minute, the first debate of the 2020 presidential election was off the rails. For 90 minutes, Donald Trump vomited a seemingly endless series of lies and interruptions, resulting in a spectacle that could barely be described as a debate at all.

One struggles to find the right metaphor. “Dumpster fire,” that trusty stand-by of the Trump era, may be both too twee and too contained to actually do justice to the proceedings. What happened onstage Tuesday night at Case Western Reserve University was unadulterated high-test chaos: a profoundly dispiriting distillation of the circus that is the last four years of American politics.

Naturally, this was Donald Trump’s strategy. He came to Cleveland, Ohio, with no real plan except to elbow his way into every question, arguing incessantly with both his opponent Joe Biden and moderator Chris Wallace. Whenever he found himself stuck in a spot, he lied—about his administration’s coronavirus response, about Joe Biden’s record, about his tax avoidance. For the most part, Trump seemed bent on pulling Biden into the gutter with him. The president didn’t want to speak truthfully about the disastrous state of the economy or the 200,000 Americans who have died of coronavirus. He was more amped to attack Joe Biden’s sons ties to China and past drug addiction, to suggest that the vice president was “stupid” for attending a state school, and accuse him of being racist and senile. But for longer stretches, he mostly just flailed wildly, throwing many punches and landing few. The ultimate effect of Trump’s performance was the prevention of any dialogue or discourse. He might not have vanquished his opponent, but he defeated the debate.

Trump’s campaign, underwater on every issue except the economy, is increasingly dependent on painting Biden as the addled marionette of the far left, with Kamala Harris and Bernie Sanders pulling the strings. Trump’s re-election team will likely cull from Tuesday night’s affair enough instances of Biden stumbling over his answers to fuel a thousand campaign videos—it’s not that surprising, given the torrent of interruptions and distractions unleashed by the president. It’s anybody’s guess as to whether Trump’s many misstatements and lies will prove to be as viral. If the intention was to stage a high-minded, substantive debate about the president’s record, policy disagreements, or ideas, the president put an end to it. In its place we received the by-now-familiar endless recitation of the president’s own pathetic grievances.

Biden had his stumbles, Trump had far more lies—and yet somehow Chris Wallace emerged the worst for wear. The Fox News anchor has a reputation as a tough and crafty interviewer, someone with a knack for clever traps and unexpected questions. At times, you could almost discern the shape of the debate Wallace had hoped to moderate; the contours of some of his ornate stratagems. He was no match for the chaos. Within ten minutes he’d lost control, struggling to hold the scene for brief snatches the rest of the night. All he could do was beg the president to stop interrupting—though he often seemed to intimate that Biden was equally to blame in the repetitive disorder that spilled onto the television screen. When Trump was asked to condemn white supremacist groups, Wallace let him go with a vague answer—the president will have enough to claim that he repudiated right-wing gangs, even though he did no such thing.