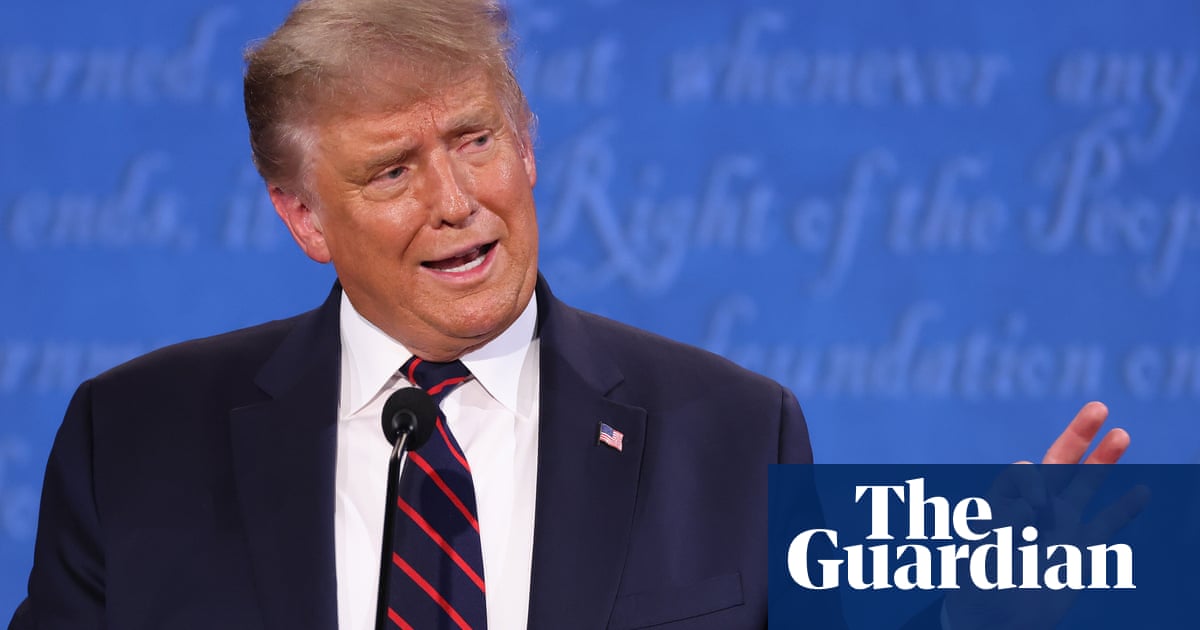 Donald Trump’s refusal to condemn white supremacy during Tuesday night’s debate fits into a pattern of extremist rhetoric that has already baselessly stoked fear of voting fraud amid the president’s urging of his supporters to descend on polling stations in November’s election.

Experts have already warned that Trump’s encouragement of people to scramble to polling stations could have horrific consequences, given that armed, rightwing, Trump-supporting militias have already brought violence and fear to cities across the country in the wake of anti-racism protests.

Others have warned Trump has already used the rhetoric of white supremacists in recent months.

On Tuesday, in front of perhaps his largest audience yet this election cycle, Trump doubled down on that rhetoric. Asked if he was willing “to condemn white supremacists and militia groups”, Trump instead sidestepped the question, and seemed to equate those groups with “leftwing” violence.

He then name-checked the far-right Proud Boys to “stand back and stand by”, in a move that the group itself quickly celebrated as a call to arms from the Oval Office.

Trump’s answer fits with similar comments throughout his presidential campaign and presidency. After an anti-fascism protester was killed at a white nationalist rally in Charlottesville in 2017, Trump claimed there were “very fine people on both sides”.

Trump’s comments on voter fraud also fit a pattern of the president seemingly attempting to intimidate voters. “I am urging my supporters to go into the polls and watch very carefully, because that’s what has to happen,” Trump said on Tuesday night. “I am urging them to do it.”

As Trump cited, without evidence, concerns about fraud, some of the first groups to respond to his call for action were rightwing extremists.

The Proud Boys reveled in the presidential endorsement. They quickly offered for sale T-shirts with the motif “Standing by”.

On Parler, a social network created for conservatives and the far-right, Proud Boys was still trending on Wednesday morning. The group’s founder, Gavin McInnes, posted Trump’s quote amid a slew of his more typical messages, including several which were homophobic.

Another user posted an image of the Gadsden flag – a snake on a yellow background, which has become a popular symbol among the right – with the words “Stand back and stand by” beneath it. The user tagged the post #threepercenters – a far-right militia group.

Republicans are seeking to recruit up to 50,000 people in 15 key states to serve as poll watchers and challenge the registration of voters they believe are ineligible, according to the New York Times.

Trump’s encouragement of people to descend on voting stations has many concerned, given the makeup and conduct of Trump backers this year.

“You’ve got thousands of armed vigilantes on the streets this summer, first around these reopen demands [protests clamoring for coronavirus lockdown restrictions to be lifted] at state capitols,” Joe Lowndes, a professor of political science at the University of Oregon, told the Guardian in late September.

“Then, after that, many more of these vigilante far-right groups, who are declaring themselves as pro-Trump, come out to confront and sometimes menace Black Lives Matter protesters, and in a couple of cases kill them,” Lowndes said.

“You can imagine them showing up at election sites or where votes are being counted in election districts in contested states in Michigan, or Ohio, Wisconsin, Florida or wherever else.”

Rashad Robinson, president of Color Of Change, a non-profit civil rights group, said Trump had “made his call to violence crystal clear”.

“Just minutes after he told a terrorist organization to ‘stand by’, they started suiting up and preparing to attack America,” Robinson said, referencing the Proud Boys.

“Donald Trump needs white nationalists at the ready because he needs violence to win the election. He wants white nationalists to invade polling places across the country and prevent voters from voting, to invade our streets and attack people who are protesting, and to prevent ballots from being counted.

“He made clear that his campaign is not about winning votes, it’s about holding on to power – no matter the cost.”