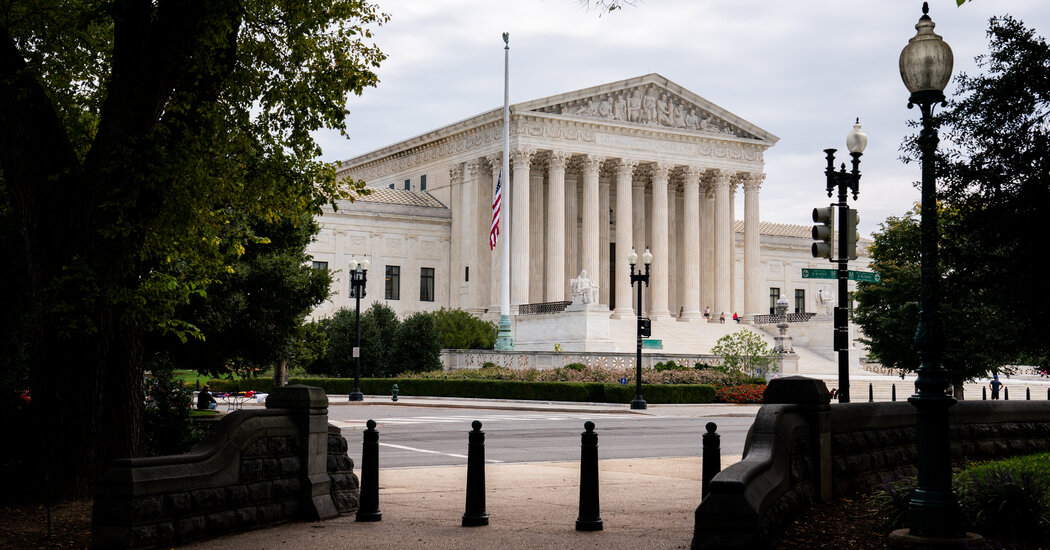 WASHINGTON — The Supreme Court agreed on Wednesday to move quickly to consider an appeal from the Trump administration that seeks to revive its efforts to exclude undocumented immigrants from the calculations used to apportion congressional seats.

The move will allow the court to hear the case as soon as December, setting the stage for a ruling on a policy that seeks to upend a constitutional consensus and would generally shift both political power and federal money from Democratic states to Republican ones.

The Constitution requires congressional districts to be apportioned “counting the whole number of persons in each state,” using information from the census. To this end, a federal law requires the president to send Congress a statement setting out the number of representatives to which each state is entitled after each decennial census.

In the past, those statements have been based on a count of all residents, whatever their immigration status.

In July, President Trump issued a memorandum taking a new approach. “For the purpose of the reapportionment of representatives following the 2020 census,” the memorandum said, “it is the policy of the United States to exclude from the apportionment base aliens who are not in a lawful immigration status.”

“Current estimates suggest that one state is home to more than 2.2 million illegal aliens, constituting more than 6 percent of the state’s entire population,” the memorandum said, apparently referring to California. “Including these illegal aliens in the population of the state for the purpose of apportionment could result in the allocation of two or three more congressional seats than would otherwise be allocated.”

Mr. Trump ordered Wilbur Ross, the secretary of commerce, to provide him with two sets of numbers, one including unauthorized immigrants and the other not. It was not clear how Mr. Ross would derive the second set of numbers, as the Supreme Court last year rejected his efforts to add a question on citizenship to the census.

The new policy was challenged by two sets of plaintiffs, one a group of state and local governments and the United States Conference of Mayors, and the second a coalition of advocacy groups and other nongovernmental organizations.

A three-judge panel of the Federal District Court in Manhattan ruled that the new policy violated federal law. In an unsigned opinion, the panel said the question was “not particularly close or complicated.”

“The secretary is required to report a single set of figures to the president — namely, ‘the tabulation of total population by states’ under the ‘decennial census’ — and the president is then required to use those same figures to determine apportionment using the method of equal proportions,” the panel wrote, quoting the relevant statutes.

Two of the judges on the panel, Richard C. Wesley and Peter W. Hall, were appointed by President George W. Bush. The third, Jesse M. Furman, was named by President Barack Obama.

Much of the panel’s opinion concerned whether the plaintiffs had suffered the sort of injury that gave them standing to sue. It concluded that the new policy made it less likely that undocumented immigrants and others would participate in the census, harming its accuracy. Census data is used for many purposes, including how hundreds of billions of dollars in federal spending are distributed.

The case is complicated by related disputes. A federal judge in California has issued a preliminary injunction preventing the administration from winding down the count before the scheduled completion date of Oct. 31. She also barred officials from delivering completed population data to the White House on Dec. 31 rather than the April 2021 delivery date that had previously been announced.

If the count is completed by the time the Supreme Court rules, the three-judge panel’s reasons for finding standing may lose force.

In asking the Supreme Court to step in, the Trump administration, represented by the acting solicitor general, Jeffrey B. Wall, said the new policy’s “alleged ‘chilling effect’ on census participation is too speculative” to allow the plaintiffs to sue and that they should wait until Mr. Trump submits his tabulations.

Mr. Wall also defended the new policy on the merits, saying that the term “persons in each state” can be understood to require “a sovereign’s permission to remain within the jurisdiction.”

Mr. Wall asked the court to put the case on unusually fast track, one that would allow the justices to hear arguments in December. Given statutory deadlines of Dec. 31 for Mr. Ross to submit census data to the president and Jan. 10 for Mr. Trump to submit apportionment information to Congress, Mr. Wall wrote, prompt action was needed so that the administration is not forced to make reports “that do not reflect the president’s policy decision.”

Apportionment can be adjusted after the submission, Mr. Wall conceded, but that “would undermine the point of the deadlines established by Congress, which is to provide prompt notice to the nation about the new apportionment that will govern the next congressional elections.”

In response, the plaintiffs, represented by the American Civil Liberties Union, accused the administration of litigation gamesmanship. The administration had told the three-judge panel that “there is no need to resolve this lawsuit before the submission of the enumeration numbers to the president,” the brief said, quoting a filing in the lower court.

“There are no changed factual circumstances that can possibly explain” the administration’s “180-degree turn” in asking for expedited treatment, the brief said.

The court ordered the plaintiffs to respond to the administration’s brief by Oct. 7.