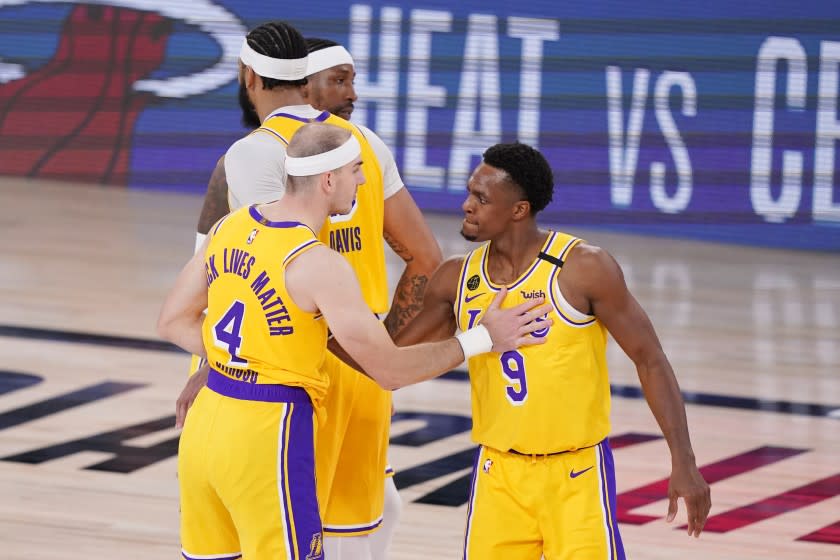 The Lakers and James are on a mission to win the championship. James has an elite running mate in Davis to help accomplish that goal. During these playoffs, James is eighth in scoring (26.7) and third in assists (8.9) while Davis is fifth in scoring (28.8). The Heat are tough, hard-nosed and led by Butler, who embodies all that for Miami. Butler has help in Adebayo, who is fourth in the postseason in rebounding (11.4).

Whether it has been Caruso, Kuzma, Rondo or Morris, the Lakers’ reserves have been stars in their roles throughout the playoffs. They have made timely shots, gotten steals in critical moments, provided solid defense and let the veteran Rondo, who has a ring, lead the cast. The Heat have a sage veteran in Iguodala, who faced James in four consecutive NBA Finals as a member of Golden State, and have gotten some great offense from Herro, a rookie who made a name for himself by averaging 19.2 points in the Eastern Conference finals, including a 37-point outburst in Game 4 against the Celtics.

They must be prepared for the variety of defenses the Heat will employ — from man to man to zones to double-team traps. Then again, James has seen every defense there is, and the ball will be in his hands to make the right decisions. When Davis plays center, he will encounter a dogged defender in Adebayo, but Davis is so multi-skilled that he should have success.

Miami will attack inside with Butler and Dragic off the dribble. Miami also moves bodies and the ball and looks for three-point shooters moving into open spots, especially in transition. The Heat are not afraid to run some offense through Adebayo. So, the Lakers will have to especially run out to Miami’s three-point shooters on the fast break and the Lakers may not be able to play a lot of zone in this series.

Frank Vogel has pushed all the right buttons in getting the Lakers to the Finals and deserves credit for doing a good job all season. Vogel has kept the Lakers’ eyes on the prize, and that is a championship. Miami’s Eric Spoelstra is one of the best in the business at what he does. He has a bright mind for the game and is always prepared.

The Lakers have been through so much this season, most notably having to come to grips with the death of Kobe Bryant, his daughter Gianna and seven others killed a helicopter crash. They have endured, staying focused and driven to win a title in honor of Bryant. Miami has not backed down to any challenges in the postseason, showing just how mentally tough the group is and has to be with venerable team president Pat Riley always peering.