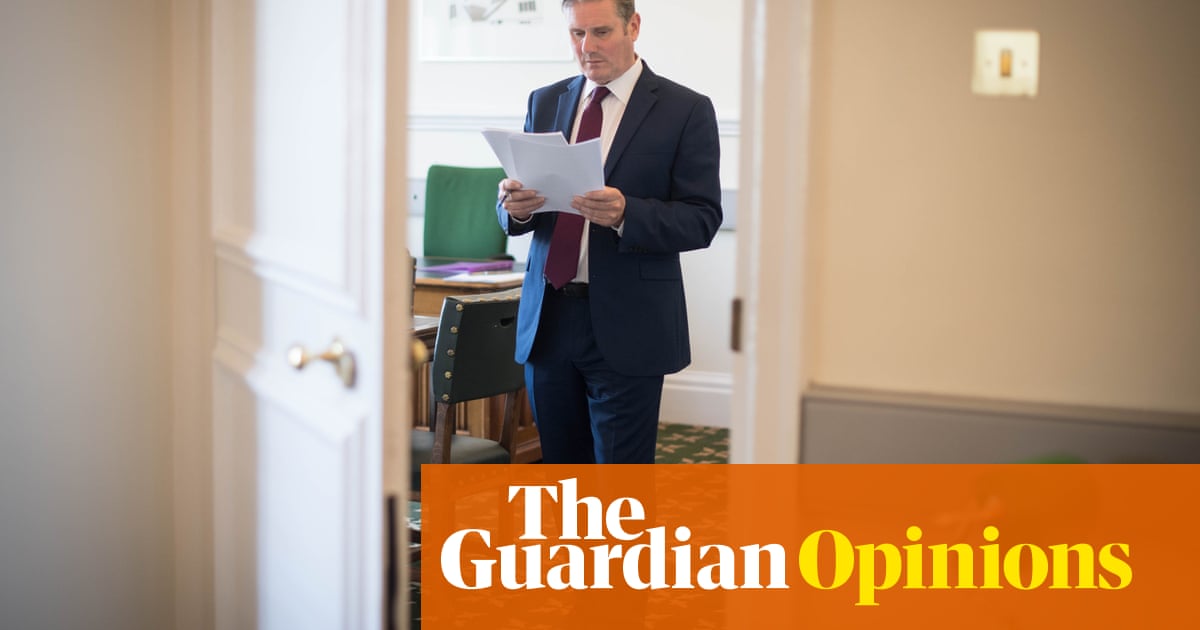 There is a joke that, if you wish to take the temperature of the British public, just turn on Gogglebox. Last week’s episode on Channel 4 saw the families watch Keir Starmer and remark with confusion on why exactly the Labour leader kept agreeing with the government.

It is not unreasonable for the opposition to think it needs to behave in a less partisan way in a national emergency – much of the public supports this – and the tactic has hardly failed outright: Labour has just recorded its first poll lead since Boris Johnson became prime minister. But the gambit and the Gogglebox families’ bemusement points to a feeling that ran through the Labour leadership campaign and its aftermath: no one is quite sure what Starmer actually stands for.

The past week has offered some answers. Off the back of his Labour conference speech and first party political broadcast, Starmer introduced a series of themes, with patriotism and national security figuring prominently. It’s notable that both of these issues are what we would traditionally associate with the right. It is not that politicians shouldn’t ever tread on their opponent’s territory, or attempt to reframe them. The NHS is far from typical Tory ground, but Johnson freely spent the last general election campaign raising the topic (even fudging new hospital figures) to the extent that many voters said they actually trusted him more to protect the service than they did Jeremy Corbyn. But there are dangers in this sort of strategy. By reinforcing your opponent’s talking points, you are essentially conceding ground in a game you can rarely win.

Last week’s overseas operations bill vote was a lesson here. The party abstained – presumably in fear of Starmer being cast as “anti-British”, just as Corbyn was – but, regardless, Conservative HQ still followed the same attack line. It is reminiscent of the party abstaining on the welfare bill in 2015 as a sign it was “listening” to the public’s concern on supposed benefit overspending. You ditch your morals for no discernible political gain.

Starmer would have been better coming out strong. He “won’t take patriotism lectures from a government that leaves veterans sleeping on the streets”, he could have said. “Patriotism is not believing British soldiers need help to get away with war crimes,” he can safely argue as a former director of public prosecutions, “but having faith in Britain to uphold international law as a beacon of justice.” It is possible for the left to take on values such as patriotism and security – and sensible not to ignore their power – but it has to be on its own terms, not with rules set by the right. This means remembering the values that got you here – compassion, equality, fairness – and what you are fighting against.

Sidelining your own beliefs is also why Starmer’s recent emphasis on government incompetence ultimately feels lightweight. I’ve written before that competence is in many ways a sensible stick to beat the Tories with – partly because it skewers their own framing that they are the party that can be trusted with public money – but it must be accompanied by a strong assault on their values. It’s not just about competence in and of itself. Child poverty and homelessness do not put a rocket under Tory governments simply because they aren’t competent enough to fix social ills – it’s because they have no desire to solve them.

After Corbyn’s landslide defeat last December, Starmer’s Labour is clearly tentative about lifting its head above the parapet. This is understandable – the psychological impact of such a loss shouldn’t be underestimated – but caution soon has its dangers. An unspoken consequence of Labour’s election annihilation is convincing large sections of the party that any support for human rights or display of basic compassion has to be traded off or muted to win back the phantom bigoted red wall voter (a conclusion that, of course, does no favours in its assumptions about working-class non-southerners).

The Tories are indeed doing all they can to rev up a culture war – territory that is only going to get more toxic – and Labour cannot refuse to engage with the concerns of voters by pretending they don’t matter, nor launch in without first winning back trust.

But neither can it sacrifice or dilute its social and economic values. They are, after all, its purpose: the only parliamentary political force with a chance at challenging the structural inequalities that are leaving millions without decent housing, secure, well-paid jobs, or even enough food for their children. This has only become more pressing with coronavirus. In an era of soaring joblessness and crumbling living standards, few families are crying out for the status quo in a good suit.

In the coming months and years, Starmer has the opportunity to build a compelling progressive narrative – one where loving your country means cherishing its public services. Where real security means a decent job that can provide for your family, and the Tories’ incompetence and injustice are tied together. Labour’s task is difficult, complex and above all, urgent. Only the brave can create change.

• Frances Ryan is a Guardian columnist