‘You bitch, I said, and threw things at him’

Les Child, dancer with Michael Clark Company, 1982-89
Before I’d even met Michael I saw him on a poster and was in awe – just because of his amazing proportions. The first time I really saw him dance, he did a solo in a tutu and I was gobsmacked. I started to throw things at him: “You bitch! I didn’t think that was possible!”

I feel really fortunate to have witnessed such amazing beauty. It was his ethereal composure. He was a product of the Royal Ballet School but he was otherworldly. His transitions between steps were so pure, everything was effortless. You weren’t conscious that this person had learned to dance. It was as though he came out of the womb dancing.

‘I guess we have to have a sex scene’

Charles Atlas, film-maker
A producer I was working with had some money to make a film and I said: “I’ll do anything if I can work with Michael Clark.” I’d met him in New York and he was such an extraordinary dancer, just a darling person, charming and funny and a rascal. His trajectory was unusual. Normally, the pattern is that you dance with a major company till you’re about 30 then leave and start choreographing. But when Michael was 21 he already wanted to do his own work. 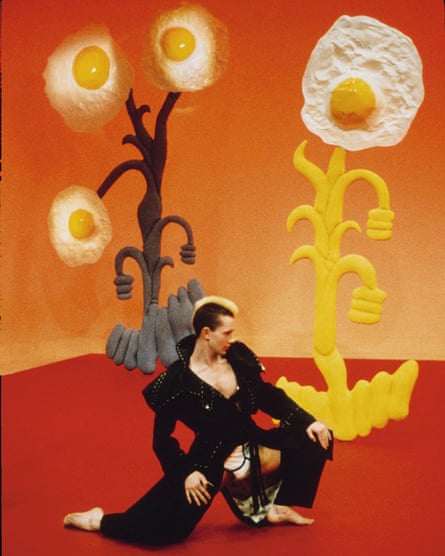 ‘You could do almost anything back then’ … Charles Atlas’s Hail the New Puritan, 1986. Photograph: Alex James

I took the film money and made a fake day-in-the-life, called Hail the New Puritan. We turned London’s Chisenhale Dance Space into something like a New York loft to stand in for his flat. We did a club scene: all his friends showed up during the daytime and pretended to be at a nightclub. It was 1986, the early days of Channel 4 and you could almost do anything. That’s why I got away with the sex scene. They were like: “OK, it’s Michael Clark, I guess we have to have a sex scene.” It was like the wild west.

‘I sat on a giant burger wearing a Lurex swimsuit’

Brix Smith Start, former guitarist in the Fall
I was watching telly with Mark E Smith [frontman of the Fall] and some music show had done a profile of Michael, this punk ballet dancer. I remember this beautiful guy wearing a pink tutu with a mohican and we were just like: “Holy fuck, who is that?” Then it came to our attention that he was a massive Fall fan and we met him and became thick as thieves. I had never seen anything like the way he moved. The musicality, the set design, the costumes, the gender-neutral roles: it wasn’t like anything that had come before and is still fresh to this day.

I Am Curious, Orange, an extraordinary dance show we collaborated on in 1988, was one of the greatest artistic experiences in my entire career. There was an acid-house section that was absolutely psychedelic. The costumes were beyond: big wigs, glitter, ass-less pants. And then there was the burger: a gigantic Big Mac rolling and spinning on wheels. I had to sit on the burger in a leathery Lurex bathing suit that Bodymap had made for me with my white Rickenbacker guitar. Leigh Bowery, the performance artist, was in charge of pushing the burger – and he was a vicious burger wheeler, spinning me like a funfair ride with me trying to play my part and not fall off. 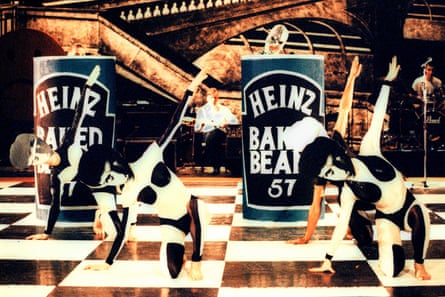 At the time, my marriage to Mark was breaking up. I would spend hours in the dressing room sobbing, then have to pull it together. So my heart was breaking while I was on that burger. But the show was so spectacular that being part of it lifted your spirits to another level.

‘We set up shoots in men’s toilets’

Nick Knight, photographer
I first photographed Michael for i-D magazine in 1985, part of 100 portraits of London’s beau monde. Through that, I became involved in Leigh Bowery’s Taboo club. Michael was a real star on the scene, an incredibly handsome young man. I think everybody was in love with him.

We had a live broadcast on [fashion website] ShowStudio and Michael did a performance to Send in the Clowns. I remember the producer’s horror as his dancers walked on and they were all completely naked. The producer quickly got some fur stoles, to be strategically placed. They didn’t hide much.

‘He stirs stuff within you’

Sam Taylor-Johnson, artist and film-maker
Michael was very much a part of the late-night, all-night world we all inhabited as artists in London. I remember the first time I saw him dance – and every time since – having such a visceral response to seeing somebody move. It’s physically overwhelming, almost drove me into a panic – how do I grasp this?

Often, you’re watching his dancers and he runs on stage, like a will o’ the wisp, like he creates order to be the anarchist among it. He has that energy: I’m going to stir some stuff up within you that you don’t quite know what to do with. The last time I saw him was probably when he did the show at London’s Tate Modern. I can’t listen to Bowie now without thinking of that piece. 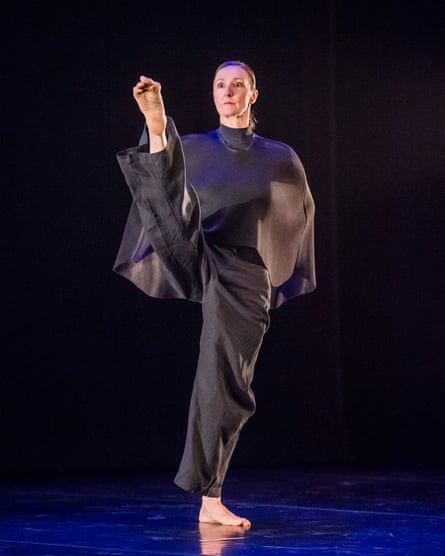 Kate Coyne, dancer and associate director of Michael Clark Company
I’ve worked with Michael for nearly 25 years and I love it. He’s very funny but very exacting – he sees things graphically in space. It’s often about being off-balance and challenging your relationship with gravity. The more you can do, the more he’ll throw at you. The discipline in the studio is strong. We work for hours perfecting things, but on stage there’s a different challenge every time: costumes, lights, Michael running round giving you a prop.

In a show in Edinburgh, he came on and gave me a pint glass full of beer and I had to carry on doing this solo holding it. Then he came back with a pair of antlers. He likes to disrupt things, make impromptu entrances and exits, and your job is to keep going. A 10-show run will be different every night. I’ve always found that brilliantly entertaining. 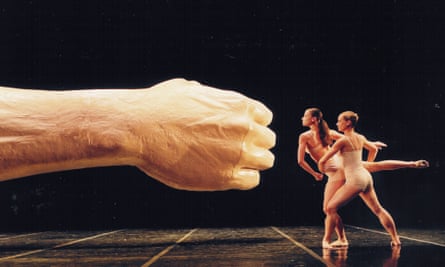 ‘Getting it on and off stage was touch and go’ … Wanking Arm, 2000, by Sarah Lucas, which featured in Before and After: The Fall. Photograph: © Sarah Lucas, courtesy Sadie Coles HQ, London.

‘I designed a big mechanical wanking arm for him’

Sarah Lucas, artist
I met Michael in a bar, with lots of other people, all drunk. I remember dancing about and Michael lifting me up very high in the air, smiling his lovely smile. Before I met him, I really didn’t know anything about dance, so touring for a year with him was quite an eye-opener for me.

I designed a giant mechanical arm for the set of Before and After: The Fall. Getting the big wanking arm on and off stage was touch and go sometimes. I would spend a lot of time sitting in the stalls watching rehearsals. From there, I came to realise Michael’s amazing awareness of how things on stage will look. His shows are always great fun, but they are also very precise and disciplined.

‘It was like watching a creature from the ocean depths’

Mikhail Baryshnikov, dancer
I first saw Michael dance in the 80s. My first impression was that he had an aura of Nijinsky about him, a sensuality and a bold way of movement. There was nothing shy about it, but at the same time every position was precise and articulate. It felt like I was watching a creature from a secret place, from the depths of the ocean where there’s no light.

His choreography owes much to Merce Cunningham, the way he plays with depth of field, unusual musical choices and angled bodies, but Michael throws his underground origins at classical ballet and picks up the shards to create something unexpected. When he worked with me [on Rattle Your Jewellery and Nevertheless, Caviar], he would dance in front and I’d try to follow. Wild! I couldn’t keep up at first, but eventually I think I got the rhythms and complexity. 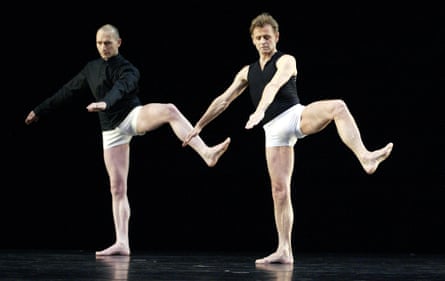 There was an unpredictability and a deep trust – an unusual combination. We had a great time on stage together and, who knows, maybe there’s still time to do something else.

Wolfgang Tillmans, photographer
My favourite photograph of Michael is one called Bridge. It has a table of old Italians playing bridge in a library and Michael in a semi-handstand, reaching a leg up in the air and the bridge-players are completely unfazed, taking no notice. It’s a coexistence of different realities. The picture doesn’t make sense, but so many things in the world don’t.

When I see a piece by Michael, there are actions and props and settings that don’t make sense according to any logical line, but you get a feeling that this man understands something about life. He is serious in his humour and absurdity: it’s all about bearing the contradictions of life. In a world where lots of people have certain beliefs and impose them on others, it’s a way to project an alternative that is playful and throwing back that certainty.

• The exhibition Michael Clark: Cosmic Dancer is at the Barbican, London, from 7 October to 3 January.