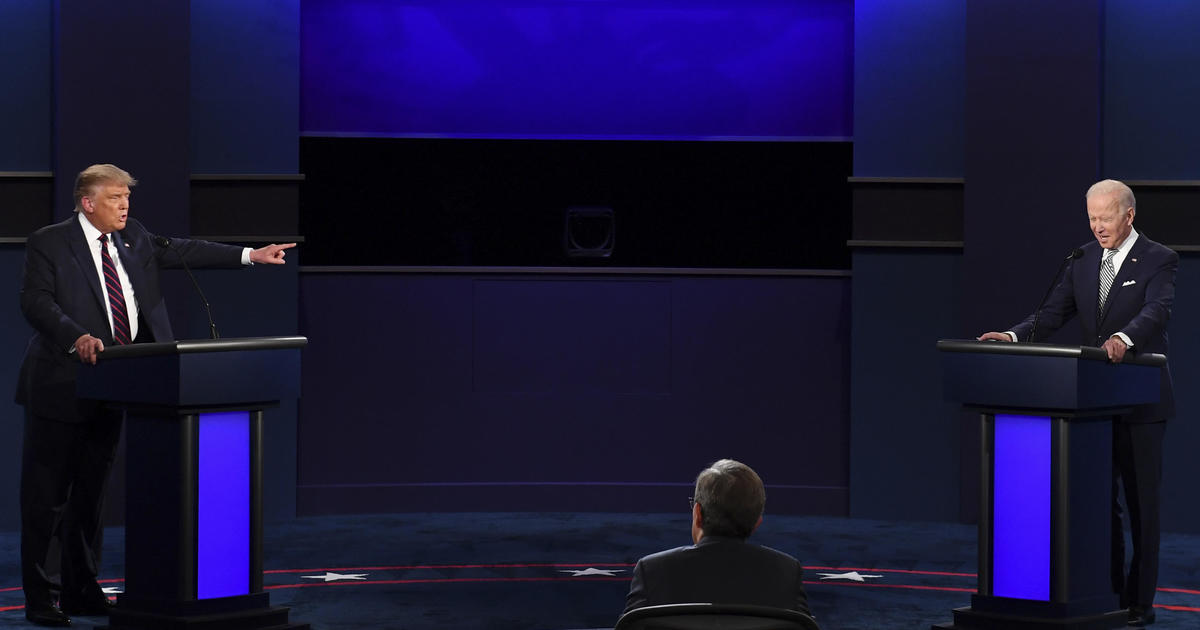 Washington — The commission that oversees the general election debates between candidates for president and vice president said Wednesday it will be making changes to the format of the remaining two presidential debates, including possibly taking control of the microphones of President Trump and Democratic nominee Joe Biden.

The Commission on Presidential Debates is responding to Tuesday’s face-off between President Trump and former Vice President Joe Biden, the Democratic presidential nominee, which was marred by frequent interruptions by the president and mud-slinging.

In a statement following the presidential debate in Cleveland, Ohio, the first of three scheduled in the run-up to the general election, the commission said the event “made clear that additional structure should be added to the format of the remaining debates to ensure a more orderly discussion of the issues.”

“The CPD will be carefully considering the changes that it will adopt and will announce those measures shortly,” the organization said. “The Commission is grateful to Chris Wallace for the professionalism and skill he brought to last night’s debate and intends to ensure that additional tools to maintain order are in place for the remaining debates.”

An informed source told CBS News’ Norah O’Donnell the commission will spend the next 48 hours determining new guidelines and rules for the second debate. The organization is working on all possible solutions, but the source said that “we are going to be making changes.”

At the top of the list is controlling the two candidates’ microphones and their ability to interrupt one another and the moderator. The campaigns will be informed of the rules, but the source said the rules will not be subject to negotiation.

For the next debate, which is a town hall, there will be only 15-20 people in the hall asking questions.

Tim Murtaugh, communications director for the Trump campaign, criticized the commission for the forthcoming measures.

“They’re only doing this because their guy got pummeled last night,” he said in a statement. “President Trump was the dominant force and now Joe Biden is trying to work the refs. They shouldn’t be moving the goalposts and changing the rules in the middle of the game.”

Tuesday night’s debate was broken into six 15-minute segments on specific topics. Each candidate was supposed to have two minutes to speak at the beginning of each segment, with the remainder of the time up for grabs. But it quickly spiraled into chaos as moderator and “Fox News Sunday” host Chris Wallace attempted to press the two candidates on issues including the coronavirus crisis, the Supreme Court and the economy.

His efforts to restore order to the debate, however, were made more difficult by Mr. Trump’s frequent interruptions of both Biden and Wallace, and policy discussions were drowned out by name-calling and personal attacks leveled by both presidential candidates.

Biden called Mr. Trump the “worst president America has ever had,” a “clown” and told him to “shut up,” while the president made unfounded claims about the Democratic presidential nominee’s son, Hunter Biden, told the former vice president “there’s nothing smart about you” and refused to categorically denounce white supremacists.

The chaos of the first debate raised questions as to the effectiveness of the additional two scheduled for October. The second presidential debate is slated for October 15 in Miami, followed by the third and final debate set for October 22 in Nashville.