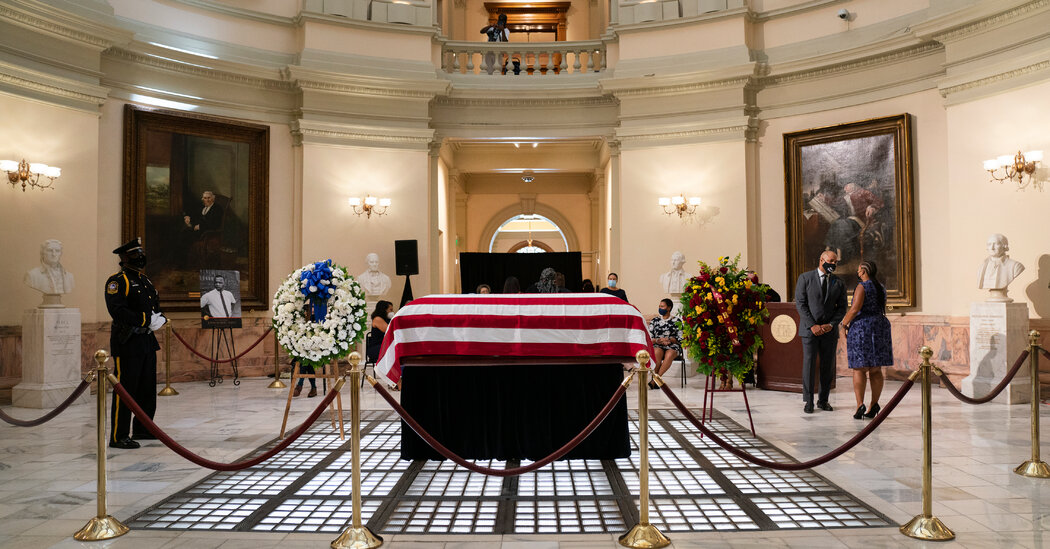 ATLANTA — John Lewis, the pioneering civil rights leader, represented Georgia’s Fifth Congressional District for 33 years. His successor will have the job for roughly a month.

A clear-cut winner did not emerge from a special election on Tuesday in which seven candidates vied to serve the remainder of Mr. Lewis’s term, pushing Kwanza Hall, a former Atlanta city councilman, and Robert M. Franklin Jr., a former president of Morehouse College, to advance to a runoff vote on Dec. 1.

Mr. Lewis, a Democrat, died on July 17 of pancreatic cancer, forcing Democratic Party officials to rush in the hours after his death to identify a candidate to inherit his place on the November ballot, landing on Nikema Williams, a state senator.

But an entirely different process was set in motion after Gov. Brian Kemp, a Republican, called for a special election to fill the seat, which covers parts of Atlanta and its suburbs, for the dwindling days of the current term.

Candidates have scattered signs along busy roadways around Atlanta and participated in substantive debates where they dived into plans for protecting voting rights, overhauling the criminal justice system and addressing the coronavirus pandemic — all for a job that will end on Jan. 3.

The contenders in Tuesday’s election acknowledged the gravity of the role and carrying on Mr. Lewis’s mantle, even if for a tenure best measured in days.

“These are the final days of John Lewis’s term,” Mr. Franklin, a scholar of theology who had also been a finalist alongside Ms. Williams to be on the November ballot, said during a recent candidate forum. “They are sacred.”

Mr. Lewis had been a vaunted figure, regarded by his colleagues as the “conscience of Congress” and among activists as a living link to the civil rights movement of the 1960s. In Atlanta, a mural with his image, declaring him a “hero,” covers the side of a downtown building and an exhibit detailing his life and civil rights work greets visitors at the airport.

“He was a mentor to me, a person I looked up to,” said Mr. Hall, a former Atlanta city councilman, who added that he grew up with Mr. Lewis as a neighbor.

The special election had a mixed-party ballot that included five Democrats, one independent and a Libertarian. None of the candidates are on the November ballot that will decide who will be sworn into office in January for a full two-year term.

Ms. Williams, who will be the Democratic nominee in November, declined to take part in the special election. In the general election, she will face the Republican nominee, Angela Stanton-King, an author and reality-television personality. Ms. Stanton-King was pardoned by President Trump this year of her conviction for her role in a stolen-car ring.

Ms. Williams became the nominee after the state party opened up applications for possible candidates, drawing 131 submissions over a weekend. They had to hurry in order to meet requirements imposed by state law to get a replacement on the November ballot and avoid jeopardizing a reliably Democratic district. (Mr. Lewis won at least 70 percent of the vote in all but one of his re-election bids.)

A candidate needed to have at least 50 percent of the vote to avert a runoff.