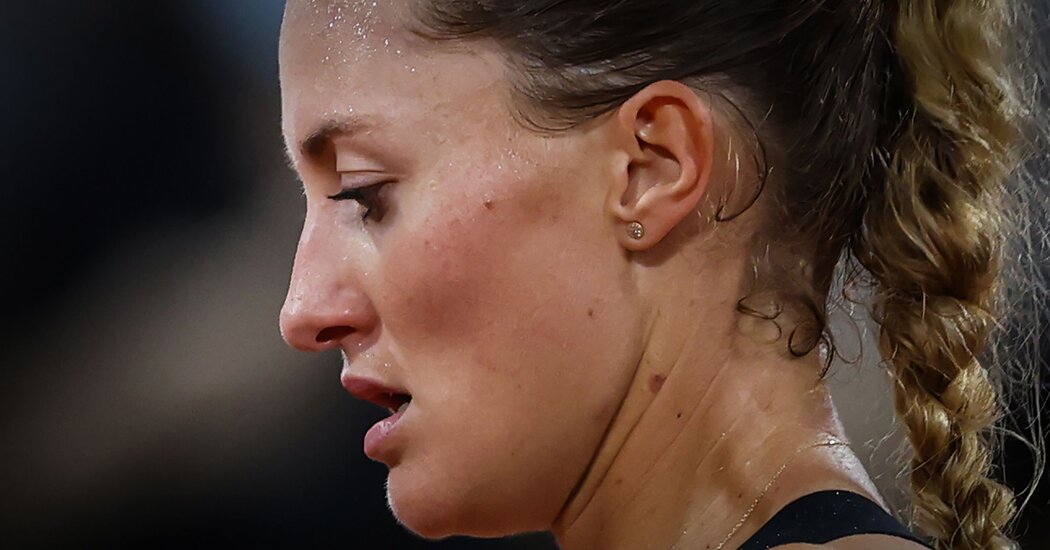 Kristina Mladenovic had reason to complain after blowing a 5-1 lead at a Grand Slam tournament for the second time this month.

As rain roiled play elsewhere at the French Open on Tuesday afternoon, Mladenovic quickly took her comfortable lead in the first set of her opening-round match under the new retractable roof over Philippe Chatrier Court against Laura Siegemund. Then, just as at the United States Open, it all came undone.

On her first set point, Mladenovic hit a sharp, short backhand drop shot which Siegemund hurtled toward, reaching her racket under the ball and sending it barely back across the net.

Mladenovic could not return it, but immediately appealed to the chair umpire, Eva Asderaki-Moore, saying that her drop shot had bounced twice before Siegemund reached it. When Asderaki-Moore shook her head in disagreement, Mladenovic covered her mouth in disbelief, but protested no further.

Slow-motion replays later confirmed that the ball indeed bounced twice, meaning Mladenovic should have won the point and the set.

Siegemund won the next two points, holding serve to pull to 2-5. Mladenovic had a second set point in the next game, and five more in the game after that, but could not convert any. Having saved seven set points, the last six without controversy, Siegemund leveled the first set and went on to win it and the match by a final score of 7-5, 6-3.

Though Mladenovic admitted she “still had the result in my hands,” she said her mind-set was clouded by the missed call.

“Probably I put a little bit less intensity in my focus,” Mladenovic said. “Even though I tried, I was a little bit away, I was still in that point thinking, ‘OK, I should have been in the second set already.’ It wasn’t easy.”

Mladenovic blew an even bigger lead in her last singles match; in the second round of the United States Open earlier this month, Mladenovic led, 6-1, 5-1, and did not convert four match points in a 1-6, 7-6 (2), 6-0 loss to Varvara Gracheva.

Mladenovic said her collapse in New York should not be compared to the one in Paris. “Because the set was mine,” she said. “It was just unlucky for me that the chair umpire didn’t do her job.”

Mladenovic said she didn’t expect Siegemund to concede the point on her own. “But if she would have done it, she would have all my respect and be super fair play,” Mladenovic said. “Yeah, this thing didn’t happen. But she’s not the one responsible. I think the chair umpire is the one that should be really focused on that call.”

Siegemund also believed the officials should be solely responsible for making the right call.

“Depends on the situation: if it’s a close call and it’s a set point against you, I think it’s the umpire’s responsibility,” Siegemund said. “I’m coming running full speed; if in that call I say, ‘Oh, it was a double bounce,’ and later I see on the video it was not, I would be angry at myself.”

Siegemund, who won the mixed doubles title at the U.S. Open this month, also emphasized Mladenovic’s bevy of other opportunities to close out the first set.

“There is a lot more room to close the set,” Siegemund said. “But if you want to jump on that one, you know, go ahead.”

Both Siegemund and Mladenovic agreed that video replay review, which has never been used to adjudicate such calls in tennis, would be a welcome innovation.

The missed call was only the latest in a series of September setbacks for Mladenovic. After her singles loss at the U.S. Open, she was disqualified from the doubles draw, where she was part of the top-seeded pair with Timea Babos, because she was identified as among a group of players who had spent time with Benoit Paire, who tested positive for the coronavirus.

Mladenovic, who had been playing under tighter conditions than other competitors, was forced to isolate in her hotel for eight more days after her disqualification, hurting her preparation for the European swing on clay, her best surface.

“I’m going to try to be a philosopher, and tell myself that if this has to happen, it has to happen in 2020, because seriously, it’s a hell of a year,” Mladenovic said. “I’m not sure what to say, I’m just wondering, why? Why does this happen? Why this sequence of bad spells?”