In a flurry of recent fires and storms, the climate crisis has left unmistakable wounds on America. Even in a tumultuous year not short of anguish elsewhere, scientists warn the climate-fueled disasters of 2020’s summer point to major shifts that will upend Americans’ lives like no other threat.

The American west has experienced its biggest year of fire on record, with blazes the collective size of Connecticut roaring across a tinderbox-dry landscape, consuming thousands of buildings, claiming several dozen lives and turning the Bay Area’s sky an eerie orange.

Meanwhile, the Atlantic has been so festooned with hurricanes – at one stage this month five storms were strung out across the ocean at once – that meteorologists exceeded their 21 English-language names for major storms and for only the second time had to turn to the Greek alphabet. Appropriately, the two phenomena met on 15 September, when wildfire smoke pouring across the country wafted into Paulette, yet another tropical storm, off the eastern seaboard.

Such events are consistent with a heating-up planet, according to scientists, with studies showing that hurricanes are becoming stronger as ocean waters warm up and the atmosphere holds more water vapor. In the west, prolonged, intense heat – perhaps the hottest atmospheric temperature ever recorded on Earth occurred in California in August – has dried out forests and soils, making them more susceptible to huge conflagrations.

Add in the floods that have soaked swaths of the midwest and the Arctic sea ice that just shrank to its second lowest extent on record and it’s clear climate impacts are now piling upon America in multiples.

“The changes from greenhouse gas emissions on the Earth’s climate system ain’t pretty and they do not come alone,” said Camilo Mora, an environmental scientist at the University of Hawaii and lead author of research that found climatic extremes are causing 400 different types of impacts upon humanity.

These threats are making people “unhealthy, thirsty, poor and homeless”, Mora said. “Climate change is like a horror movie with 400 endings to choose from.”

The different consequences of global heating, through the burning of fossil fuels, can overlap and trigger further damage. For instance, researchers have found that the combination of severe heatwaves and drought, once a rare amalgam, is becoming increasingly common in the US west, escalating the risk of wildfire and water shortages.

These connected threats will stress all aspects of US society, from transport to healthcare to community livability, researchers say. If emissions aren’t tamed, 13 million Americans face being displaced by sea level rise, US economy activity could plunge by half a trillion dollars a year and scorching heatwaves could make parts of the US south-west barely livable without day-long air conditioning.

“All of the systems that society depends on were designed to function in the climate of the past,” said Amy Snover, a climate scientist at the University of Washington who recently sealed herself inside her Seattle home for 11 days because the wildfire smoke outside was too toxic to breathe.

Snover added: “But we no longer live in the climate of the past. The climate disruption brought by warming, changes in precipitation, changes in storms and changes in sea level is destabilizing the foundation of all these systems at once.”

Millions of Americans are now being affected, to some degree, by climate breakdown but the consequences are landing most heavily upon people of color and those without the means to easily recover from losses.

In August, when Hurricane Laura became the strongest storm to ever crunch into Louisiana, Rebekah Winstead quickly threw some mementoes and documents into a duffel bag and fled her trailer park home in Lake Charles with her three-year-old son.

Terrified, Winstead drove for 10 hours overnight to stay with her sister-in-law’s parents in Atlanta, where she “stayed up watching the storm camera, seeing the whole city of Lake Charles being destroyed”. A few days after the storm passed, Winstead and her husband surveyed their ruined trailer, wrenched from its foundations. Debris has since been washed down the street from floods caused by another storm, called Beta – the ninth storm to make landfall in the US this year.

“We lost most of our things, the windows were smashed, there was mold inside,” Winstead said. “It’s not livable, which is devastating. My son keeps asking to go home but we can’t. It’s heartbreaking to see your town completely demolished.” 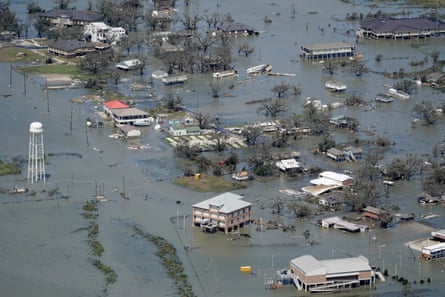 Buildings and homes are flooded in the aftermath of Hurricane Laura near Lake Charles, Louisiana. Photograph: David J Phillip/AP

Winstead’s home wasn’t insured but she hopes the family will be able to save enough for a new place further north, beyond the reach of hurricanes. “We’ve talked a lot about moving out of Louisiana completely because I don’t want to ever do this again,” she said. “I never thought at 27 I’d be married with a three-year-old and homeless. But there are a lot of people in our position, wanting to up and leave.”

The wildfires have also sent people reeling, leaving them unsure as to how they will piece their lives back together. In southern Oregon, fires burned down more than 2,500 housing units in the cities of Talent and Phoenix, many of them in trailer parks, causing concerns over a housing crisis for those displaced.

“The level of destruction in our small towns is devastating. People had to flee their homes with little to no notice,” said Sarah Westover, a Phoenix city councilor. “This is what climate disaster looks like and we are not prepared for the fallout.”

Americans will have to absorb heavier and heavier blows as the climate crisis intensifies. Rather than a new but stable normal, the disasters of 2020 are merely a rung on a climatic ladder that hasn’t been fully climbed yet. “Don’t think of it as the warmest month of August in California in the last century,” said Cristi Proistosescu, an atmospheric scientist at the University of Illinois. “Think of it as one of the coolest months of August in California in the next century.”

The dawdling response to the climate crisis means cascading changes are now baked into the system. The wildfire smoke that has blanketed the west is set to become a norm that may require mask-wearing outdoors long after the Covid-19 pandemic while, as researchers reported last week, 2.5 metres of global sea level rise from the melting of the Antarctic is now virtually guaranteed even if emissions are rapidly cut. “We will be renowned in future as the people who flooded New York City,” said Anders Levermann, co-author of the paper.

“What we see today is nothing by comparison to what is coming our way,” said Mora. “Basically, take what we see today and multiply it by two or three. I wish I could be more positive, but the evidence is overwhelming that nothing good can come from us producing more CO2.”