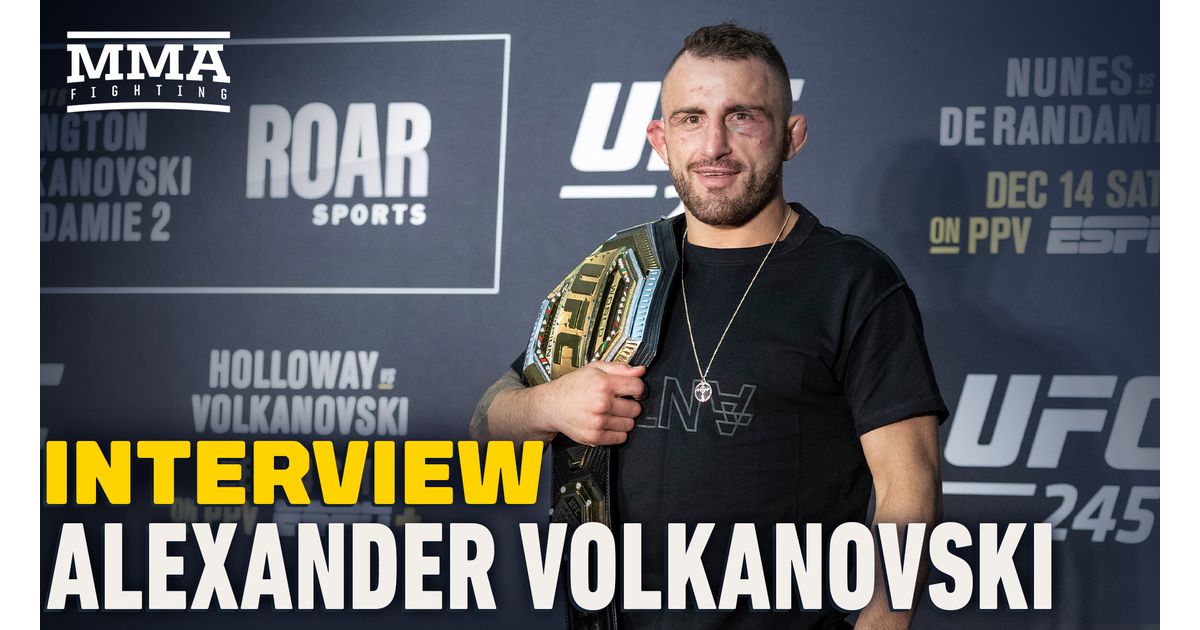 After successfully defending his title at UFC 251 against Max Holloway, Volkanovski finds himself in a position where there is no clear cut No. 1 contender at 145-pounds. So “The Great” is sitting back and eagerly waiting for the next contender.

“I’ve been pretty vocal about that, like, what are these contenders doing,” Volkanovski told MMA Fighting on What the Heck. “I’m not the type to run my mouth, but I have to let them know: What are you guys doing? Do you want this shot or not? Just get that No. 1 contender spot and you’re in. That’s all you need to do.

“I want to fight the best fighter that is next in line. I don’t care who it is, because I believe I’m a bad matchup for any of the guys in my division. I’m not scared of anybody. I just want you to be that guy. I want you to be the guy that earns that shot and the one that everyone’s talking about.”

Outside of his rematch with Holloway, Volkanovski said one featherweight who has truly made a move in 2020 is Calvin Kattar, who at UFC 249 picked up a ferocious finish over Jeremy Stephens and a unanimous decision over Dan Ige two months later at UFC on ESPN 13.

Volkanovski is also quite intrigued with the main event for the UFC’s Oct. 17 event between Brian Ortega and Chan “The Korean Zombie” Sung Jung. He believes his next challenger could very likely come from that matchup.

“Luckily, we finally have a fight that will probably be a No. 1 contender fight in Ortega and Zombie,” Volkanovski said. “The only one who’s been doing anything in the last six or seven months is Kattar. I have a lot of respect for him, and I have my eye on him because he’ll be there soon. I just don’t think he’s at that spot yet.

“I want a big fight. I want the guy that everyone’s screaming about. I think, whether it’s Zombie or Ortega, whoever wins that fight—especially if they do it in wild fashion—everyone’s gonna be screaming their name. Even if it’s Zabit if he fights Yair, I don’t know if that’s happening. I need one of these guys to go out there and dominate so I can fight them later this year, early next year. That’s what I want. Whoever people think is my hardest fight, that’s the fight for me.”

There certainly have been a couple of champions past and present who have expressed interest in facing Volkanovski. But one is retired, and the other is in a different promotion. Former UFC flyweight and bantamweight champion Henry Cejudo and two-division champ Bellator Patricio “Pitbull” Freire have both called for fights with the City Kickboxing standout. “Pitbull” even said he was willing to put up $1 million to make it happen.

“People keep talking about Cejudo, and I like having fun with that, and if there ever was a time for that, it was a few months ago,” Volkanovski explained.

“And [Patricio] with the $1 million, he ain’t gonna do that. I guarantee you. Again, I’m just having fun with it. Will it ever realistically happen? Probably not. As I said to Dana, it will be the easiest money he’ll ever make. But listen, I don’t want to disrespect him, I haven’t seen too much of him, just highlights here and there. I don’t take offense to it. And with Cejudo, he’s gonna keep begging for this fight but it’s probably never gonna happen.

At UFC 251, Volkanovski defeated Holloway in a close split decision. There are many fans and fighters who called the decision a robbery and demanded a trilogy fight.

While Volkanovski is not opposed to that matchup in the future, he feels Holloway should earn his way back up, potentially in a fight with a rising contender in Kattar.

“That’d be a good fight,” Volkanovski stated. “Kattar’s got some good hands, so that’d be a very interesting fight. I’d love to see that. But at the same time, people are saying I should fight Max again, and it’s just ridiculous. I have a lot of respect for Max and that’s why I gave him the rematch. But just because it was a close fight it doesn’t mean I’m gonna give him another fight. At least not right now.

“If Max was to fight Kattar and he fights someone else, then he’s right back up there. I want No. 1 contenders, and if he gets himself there, and there is no one else, let’s do it again. I’m having people telling me he beat me the last two fights. It’s just crazy. Obviously he has loyal fans. The second fight was close, the first one really wasn’t, but a lot of people are still talking about it so maybe a little ways down the track we can make that happen. Let me take out some contenders.

“Give Max someone new. He already had this cupcake, like he said. Let’s see what other flavors are out there for him.”

With his eyes focused on Oct. 17, Volkanovski’s head and heart are telling him two different things. While he’s leaning towards The Korean Zombie to get the victory, his rooting interest is on the other side of the octagon.

“I reckon it’s Zombie,” Volkanovski said. “Either one of them, I’m excited for them anyway. If any one of them win big, people will scream their name. Stylistically, Zombie has the advantage on the feet, he clever, he looks for counters and tries to set traps. They’re both dangerous on the ground as well. I lean Zombie.

“But who do I want to win? I don’t hate Zombie, but he’s got a team behind him that love to run their mouth. Even though [Ortega] slapped that Jay Park on his team, and good on him, even though you probably shouldn’t be slapping pop stars, but this guy was running his mouth about me as well, so thumbs up for that, but if he slaps up Zombie, it’d be like, haha, that’s what you get for running your mouth.

“If not, and Zombie takes him out, then I get to do the slapping myself. Again, I don’t hate the guy, but it would be good to shut the other team up.”

As Volkanovski awaits his next challenge, he wanted to send one final message to his fellow featherweights.

“Earn, not given,” Volkanovski exclaimed. “Go and take it. It’s there for the taking. You get that shot as soon as you’re there. Let’s go.”