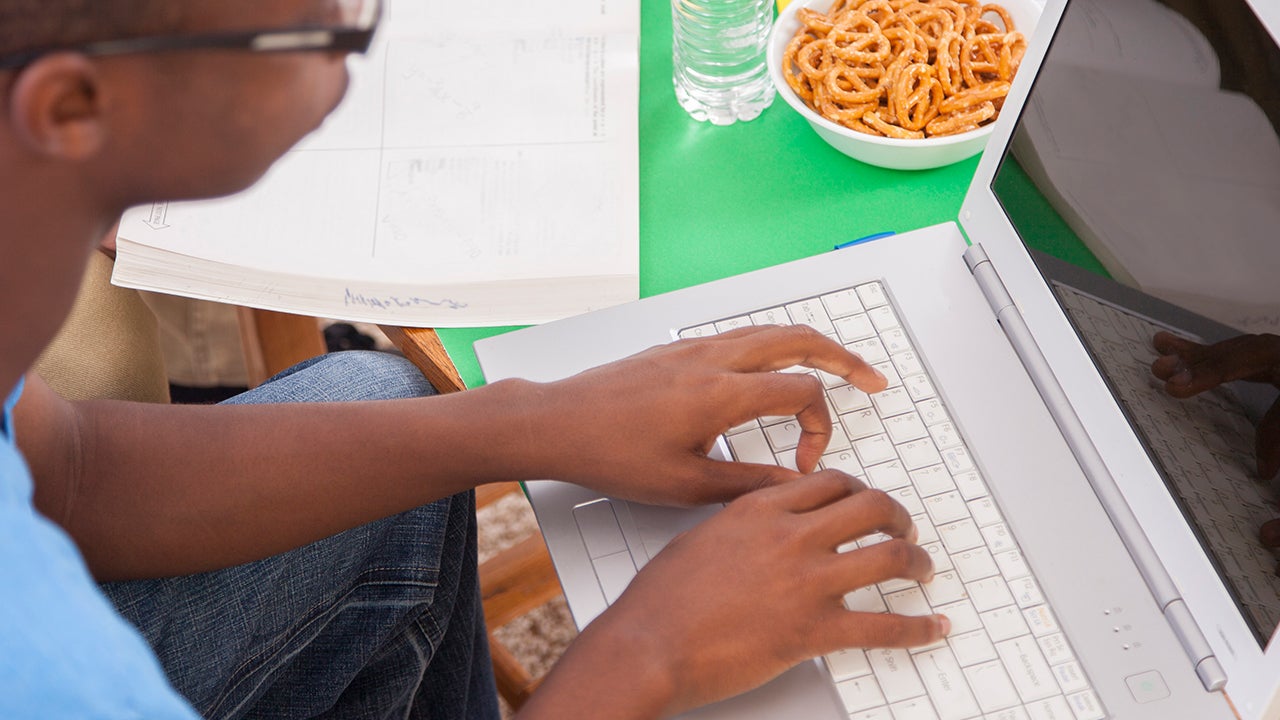 On Sept. 11, as a group of high school students at Friends Academy in New York sat in a physical education class on Zoom, practicing meditation and yoga, someone entered the session unannounced. Their name was displayed as “George Floyd” and during a moment meant to be calm and reflective, that person screamed, “I can’t breathe.”

The moment was meant to mock Floyd, 46, whose last moments of life were caught on video in May as a Minneapolis police officer knelt on his neck for 9 minutes, although he repeatedly told officers he could not breathe. The person who entered the Zoom call was later identified as a white student at the Quaker school, according to students.

“I feel like I wasn’t surprised because as soon as George Floyd’s [death] happened, kids started saying ‘all lives matter,’” Nyah Thomas, a junior at Friends Academy, told Inside Edition Digital. “They always make fun of Black issues that come around.”

A recording of what happened in the Zoom session made its way onto social media, angering many, but current students and alumni say this is just one of many instances of racism they’ve experienced at the school that that administration often turns a blind eye to.

Kayla Scott, who graduated from Friends Academy in 2018, said she was “mortified and disgusted, but not surprised” when she saw the clip of what happened in the Zoom class.

“Friends Academy’s history of total and complete inaction when it comes to dealing with the harassment of its Black students has given the power to its white students, who now think that their behavior is okay because it won’t be faced with consequences,” Scott said.

Scott, who is Black, continued on to say she had experienced instances of racism during her time at the school, beginning in fall 2014. She said she quickly realized that white students using the n-word and the harassment of Black students for their political beliefs was the norm.

“In particular, things got bad around the time of Trump’s election,” Scott said. “Specifically, a group of four white boys in my class of 2018 called each Black girl in the grade, and another white girl who was an outspoken ally, and pretended to be police officers, stating that ‘you’re Black so you have to turn yourselves in or we will come after you.’”

Scott added that the students were read their Miranda rights by the teens.

Scott claims the students responsible called from blocked numbers, but one of them accidentally hit FaceTime instead, revealing their identity in the process. Scott said the school “did nothing” about the incident.

In another instance, Scott said two white students in her class posed in Blackface on social media and posted it with the caption “is you Black?” Scott also said she reported it to faculty and the students were asked to apologize, but no other disciplinary measures were taken, she said.

Thomas, who is a part of the school’s Diversity Committee, said during one of her classes, a student said they “don’t like Black people,” and although it was reported to a teacher, she said the incident was never brought up again.

“Friends [Academy] needs to do better,” Thomas said. “I think kids are too comfortable due to no fear of repercussions.”

An Instagram page titled “Black at FA” also anonymously documents some students’ and alumni experiences of microaggressions and racism at the school.

After the recent George Floyd incident on the Zoom call, Julie Fine, a senior at the school, said the faculty sent an email saying they believe they know who entered the call and were taking action.

In a statement to Inside Edition Digital, Friends Academy said the student was held responsible for their actions, but out of respect for the privacy of the student, they would not provide details into what disciplinary action was taken.

“As a Quaker school, we believe in and work to uphold the values of integrity, equity, and justice so that we can support and foster a safe community for all children and adults, especially our Black students, colleagues, and families. We condemn discrimination, bullying, hate speech, and racism in any form and by any member of our community,” the statement read.

The school added that they “do not discuss specific student incidents and discipline is handled on a case-by-case basis consistent with our School Handbook and informed by our values.”

The school also said that they are working collectively with students and their families, staff, alumni and their board to “to identify, examine, and address any and all anti-Black bias at our school.” Some of those efforts include incorporating anti-bias and anti-racist curriculum and anti-bias, equity and inclusion workshops for adults.

But Scott pushed back on the school’s stance in not revealing how the student was disciplined.

“If the student’s name is not released, privacy doesn’t become a concern. Stating ‘the student was suspended, expelled, etc.’ does not violate the privacy of the student. Again, I think this secrecy aligns with Friends Academy’s priority of protecting the ‘privacy’ of its white students at the cost of the well-being of its Black students,” Scott said

Scott also said she and another alumna worked with the Director of Diversity, Equity and Inclusion and the Head of School Andrea Kelly over the summer to come up with ways to improve the school environment for students of color. Scott said in their list of demands to the school, they asked for students who discriminate or participate in hate speech on the basis of race, gender, sexual orientation, or any other identifying characteristic to be punished as similarly stated in the Code of Conduct for other offenses. That change was not made.(insert friends quote)

Scott said had that been implemented, the incident during the Zoom call may not have happened.

“Friends Academy has a history of inaction when it comes to the harassment of its Black students,” Scott said. “This has led to a culture of racism at FA that must stop. The burden to be an advocate for Black students at FA should not fall on the Black students or on Black alumni, but on the administration.”

‘Gone With The Wind’ Comes Back to HBO Max, Now With a Disclaimer About Racism