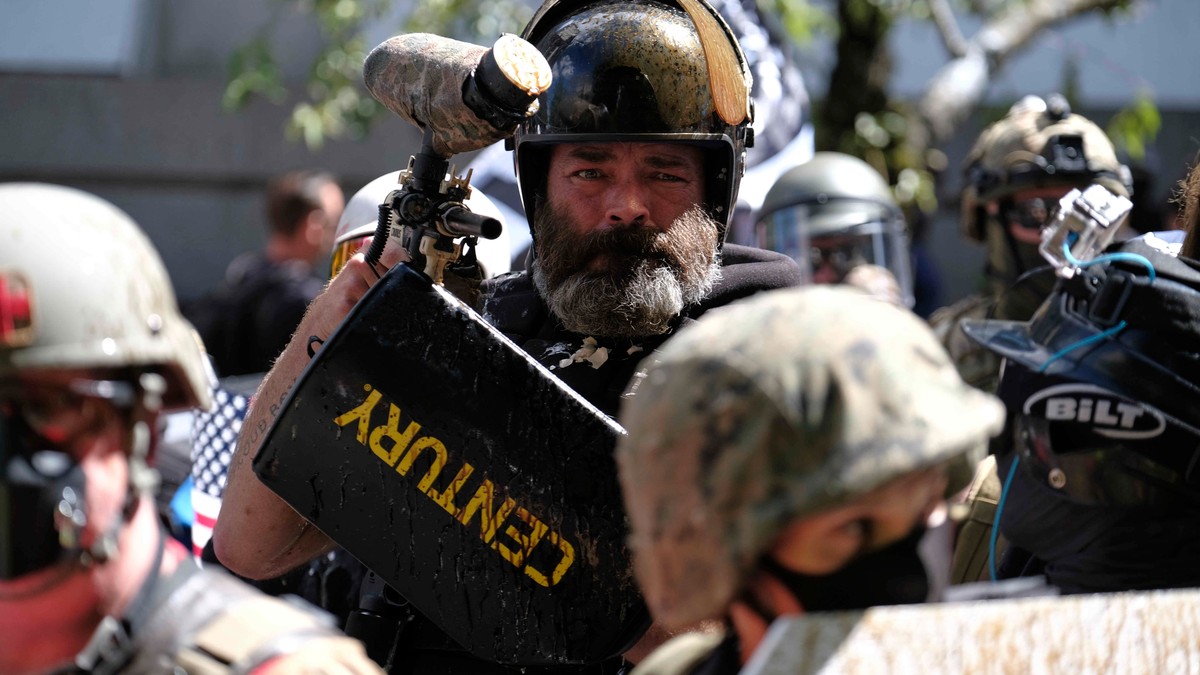 Alan Swinney, shown brandishing a firearm during protest clashes in a photo from Aug. 22 that went viral, was charged with a litany of alleged crimes, including assault and unlawful use of a weapon, according to an indictment dated Sept. 11. He’s set to be arraigned Thursday morning, according to official documents.

Swinney’s 12 charges include assault, attempted assault, unlawful use of tear gas, unlawful use of a weapon, and pointing a firearm at another person, according to a three-page indictment obtained by VICE News. The charges related to events that took place on Aug. 15 and Aug. 22, records show.

Two counts of assault relate to allegedly firing a paintball gun at other people on Aug. 15 and Aug. 22, the indictment says. Swinney, 50, allegedly pointed a pistol revolver at another person on Aug. 22, according to the document.

Swinney has attended multiple events alongside the Proud Boys in recent months, and has a Proud Boys tattoo. A leader of the group named Joe Biggs recently denied to VICE News that Swinney has ever been affiliated with the Proud Boys. Swinney posted a picture of himself with Biggs last week.

Before he was taken into custody, Swinney posted a reference to Trump’s controversial statements about the Proud Boys during Tuesday night’s presidential debate.

Trump caused an uproar by refusing to condemn white supremacists, and then telling the Proud Boys to “stand back and stand by” — in a statement that was immediately celebrated by several members of the group as an endorsement.

Swinney posted a link to a video of Trump’s remarks on the social media site Parler.

He also recently wrote on Parler that there was a warrant out for his arrest, which he believed was related to “shooting violent protesters with paintballs,” according to previous VICE News reporting. Three protesters and a photojournalist have sued Swinney and others on allegations that they fired paintballs and sprayed bear mace during August protests, according to Willamette Week.

Swinney wrote that he planned to avoid the Portland Proud Boys rally last Saturday because of the warrant for his arrest.