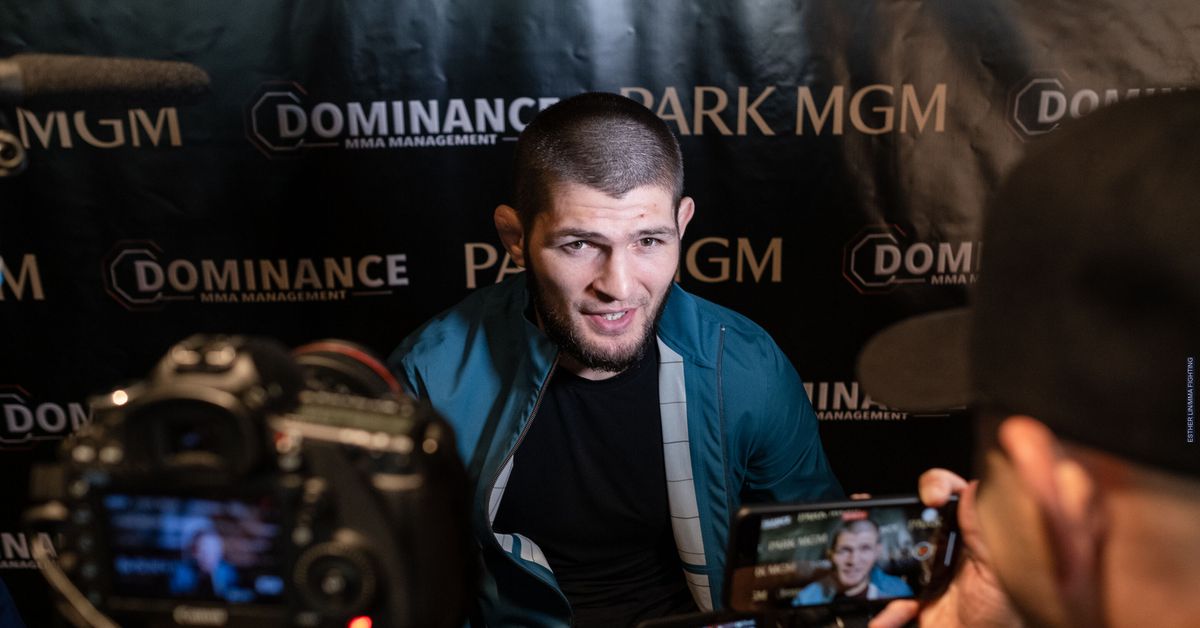 As far as Ali Abdelaziz is concerned, Khabib Nurmagomedov is out of the Conor McGregor business for good.

Nurmagomedov’s manager told TMZ Sports that talks of a rematch between the two lightweight rivals have been ongoing and were reignited recently in a conversation between Abdelaziz and UFC President Dana White. According to Abdelaziz, the UFC was considering Nurmagomedov and McGregor for a revival of its long-running reality series The Ultimate Fighter.

Justin Gaethje, another Abdelaziz client, was also considered (Gaethje challenges Nurmagomedov for the UFC lightweight championship at UFC 254 on Oct. 24). Should the pairing have been scheduled for TUF, Abdelaziz predicts it would have been a volatile one.

“Last week Dana White called me,” Abdelaziz said. “He said, ‘Ali, what do you think if Khabib win, him and Conor do The Ultimate Fighter on ESPN?’ This is breaking news. I said, ‘I don’t know. I’ll think about it.’ And he said, of course, [vice versa] if Justin win.

“It would be Khabib vs. Conor on The Ultimate Fighter, coaching. It would have been f*cking huge. Probably would have went to the hospital because he would have beat his ass and his whole team. Or Justin Gaethje vs. [McGregor].”

However, in the end, Abdelaziz claims that Nurmagomedov removed himself from the equation due to his disdain for McGregor. The two stars fought at UFC 229 in October 2018, a bout that was preceded by a lengthy and deeply personal feud. Nurmagomedov defeated McGregor by fourth-round submission in the headliner of what was one of the most successful pay-per-views in UFC history.

Even with the possibility of another massive payday for both men, Abdelaziz says Nurmagomedov wasn’t interested.

“Listen, if Justin wins, whatever, and he wants the easy payday, yeah, go ahead and fight Conor if you want. But I don’t know if even Conor still in the conversations because Justin said, ‘I gotta give him an opportunity,’ but he didn’t want the fight.”

Abdelaziz’s latest verbal assault on McGregor was motivated by McGregor recently revealing private texts between himself and White in which they discussed potential plans for the Irish superstar. McGregor did not appreciate White’s take on why McGregor’s inactivity and recent retirement announcement, and he accused him of manipulating the facts.

McGregor claims he was looking to fight multiple times in 2020 before the coronavirus pandemic hit, and it was the UFC who couldn’t set up an appealing opportunity. Abdelaziz expressed disgust at how McGregor conducting business in the public eye.

“First of all, you know, as a man, the golden rule is if you have a private conversation with another man, you should never put this online,” Abdelaziz said. “This is a complete – a made-b*tch, you understand? This is like a real-life b*tch, like I’ve always been saying for all these years. I have a lot of text messages about people I don’t like, but I will never put it out there because it’s not even right to put it out there – it’s wrong.

“Second of all, January 2020 – actually, December 2019, we wanted to fight Conor. Conor said he’s not ready yet. When [Gaethje] heard he wanted to fight in January, Justin Gaethje, he was higher ranked than [Donald] ‘Cowboy’ [Cerrone] by far, and he choose to fight Cowboy instead of Justin. Justin called him out on social media. Not one time we saw Conor respond to him.”

Abdelaziz also said McGregor was the first choice to replace an injured Nurmagomedov opposite Tony Ferguson this past May at UFC 249, but McGregor refused to be a backup and was replaced by Gaethje. After Gaethje defeated Ferguson to capture an interim title, Abdelaziz said he then made the choice to unify the lightweight belts in a fight with Nurmagomedov rather than continue campaigning for a McGregor fight.

As Abdelaziz sees it, McGregor was happier to call out older fighters anyway.

“All this nonsense about him wanting to fight Justin, this is full of sh*t,” Abdelaziz said. “He wanted to fight ‘Cowboy,’ Diego Sanchez, Matt Brown, he wanted to fight all these old veterans. Realistically, in their prime, they’ll probably beat his ass.

“But in a way, he showed you what kind of weak man he is. He’s a liar. He’s everything you don’t want to be as a man. He’s not a man. He lost all the value. Guess what? Sports have moved on. The UFC has moved on. We have moved on. When Justin Gaethje turned down probably $7 or 8 million dollars payday [to fight McGregor], it was just for his integrity. To show, ‘Guess what? I can do it better.’ Justin Gaethje’s a f*cking legend, man.”

If Nurmagomedov-Mcgregor 2 is out of the picture, Abdelaziz said there’s still plenty of fighters on his roster that McGregor can sign up for, whether it be current UFC welterweight champion Kamaru Usman or 2020 breakout star Khamzat Chimaev.

But he is adamant that Nurmagomedov will not fight McGregor again.