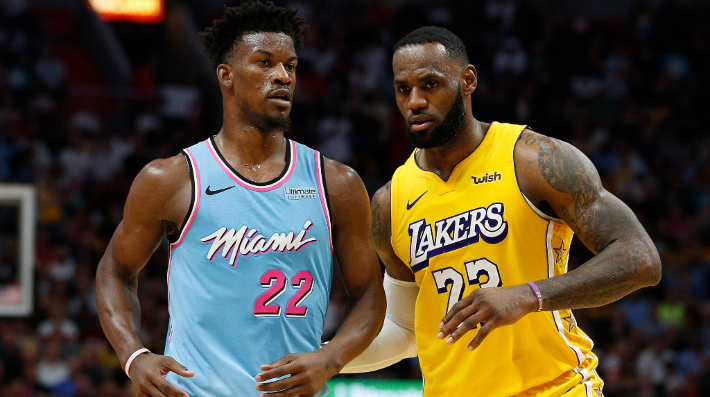 You can say it about almost any championship series, but the Lakers-Heat Finals is legitimately loaded with story lines and intrigue. You have LeBron facing his former team in Miami where he won two championships. You have Anthony Davis appearing in his first ever Finals series. You have Dion Waiters poised to take home a championship ring regardless of which team wins.

And then there’s Jimmy Butler getting his ultimate vindication after acrimonious exits from his last two teams. The Heat have been perhaps the most surprising team of the Bubble, upending Giannis and the No. 1 seeded Bucks and following that up with a decisive win over a Celtics team in the Eastern Conference Finals that many considered more talented.

Semantics aside, the Heat have exceeded expectations this postseason, and now they have a chance to spoil the Lakers’ designs on a 17th title to add to the rafters at Staples Center. To do that, they’ll have to go through James and Davis, but regardless, Butler doesn’t see his team as the underdogs in this scenario.

Via Tim Bontempts of ESPN:

“A really good team,” Butler said Tuesday, during the NBA’s annual Finals media day, of how he views the Heat entering this series. “That’s it. A really good team. Not going to say that we’re any better than anybody else, but I just don’t think that we’re underdogs. I don’t.

“So what that nobody picked us to be here? That’s okay. Pretty sure nobody is picking us to win, either. That’s okay. But we understand that. We embrace that, because, at the end of the day, we truly don’t care. We’re just going to go out here and compete, play together like we always have, and I’m going to see where we end up.”

By this point of the playoffs, the Heat have erased any doubt about their ability to hang with top-tier teams. Butler, for his part, has found the perfect marriage with an organization that prides itself on work ethic and determination. Still, because of the dominance of their superstar duo, the Lakers are the odds-on favorite to take home the title, and it will take Butler and the Heat continuing to play at an extraordinary level to remove that underdog status once and for all.