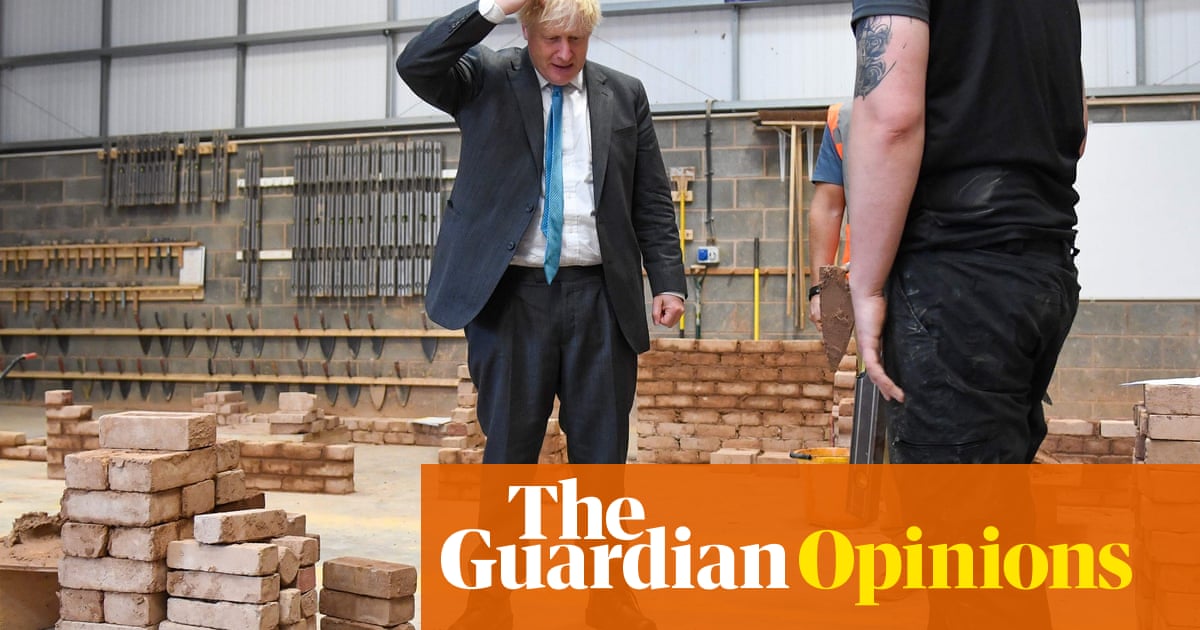 It’s been a tricky few months for Boris Johnson.

Just about every time he has been allowed out in public – be it for prime minister’s questions, his appearance before the liaison committee or his TV address to the nation – he has somehow managed to come off looking out of touch or second best.

I need a quick win, he told his advisers. A speech that will make me look good and no one can pick holes in.

Dominic Cummings thought for a while and scratched his head. Now he came to think of it, there was almost nothing that wasn’t going badly. Brexit and the coronavirus were obvious taboo subjects, which didn’t really leave much else.

I suppose, Dom said eventually, that you could give the classic speech about valuing vocational training as much as a university education. It’s the one that every prime minister trots out at some point during their time in office, so you might as well get it over and done with. After all it cost nothing, as he would only be reallocating money that had already been earmarked for training purposes.

So having checked that Exeter College wasn’t actually in lockdown, Boris found himself down in Devon talking about how useless previous governments had been in providing training for school leavers without A-levels and for those over the age of 23 looking to retrain.

He was going to get a hell of a shock on the train home when someone tells him that the Conservatives have been in power for the last 10 years.

Johnson waffled on about the post-Covid economy – his eyes glistening with euphoric recall as he remembered his own spreadsheet one-to-one boot camp – and how he was going to give everyone a lifetime skills guarantee.

Other countries had sneakily taken advantage of the fact we had never really bothered with skills training – a typical Johnny Foreigner dirty trick – and it was time for us to close the gap on them. Assuming we eventually got round to doing something about it. Which we probably wouldn’t. This was just an off-the-peg speech for Boris’s Big Adventure. No one was expected to take it seriously.

Things began to nosedive rather, when Boris took some questions from the media. He was only promising more money to level up the skills agenda in seven months time and many sectors, including his own government, could benefit from a great deal of basic skills courses long before that.

Come April, there might not be much of a country left to level up. And that was the last we heard about the skills agenda because everyone else was understandably far more interested in the latest lockdown guidance.

Earlier that morning, skills minister Gillian Keegan had been unable to clarify the rules on outside gatherings in the north-east: could he please give a definitive answer?

A look of panic crossed Johnson’s face. Just who was this Gillian Keegan and what on earth had she said? “Um,’” he began waffling.

When asked about his own health, he declared himself to be “as fit as a butcher’s dog”. A comparison that reduced many butchers’ dogs to tears.

A short while later in the Commons, Gavin Williamson also appeared to be on the verge of tears as he belatedly gave a statement on students in lockdown on their return to university.

No one could possibly have predicted that thousands of students going back to university in September might affect the transmission rate of the virus, he sobbed.

Just like no one could have predicted the A-Level and GCSE fiasco. All along his department had done everything that could have been expected of one that was run by someone as useless as him and, no, he wasn’t the slightest bit miffed that it hadn’t been him that had got to make the vocational training speech down in Exeter.

Private Pike was sorry that so many students’ first experience of university was to be banged up in a hall of residence with no one they knew, having forked out £9k for a course that was now being conducted online, but there couldn’t be one rule for students and another for the rest of the population.

Which was odd because most of us were fairly sure there were separate rules for Cummings and Robert Jenrick. Still, he had solved the Christmas problem. If students were to self-isolate for two weeks before they were due to go home, then they should be able to spend Xmas with their families.

This rather confused the shadow education secretary, Kate Green, and many other opposition MPs. What if not everyone self-isolated and there was a case of Covid-19 in the halls in the two weeks before everyone went home?

Would every student be then given a special exemption to self-isolate at home? And would their families then have to self-isolate? And what if there was a general lockdown in the university town or city anyway?

Various Tory MPs tried to cheer Gav up by saying that a little bit of self-isolation and lockdown would be the making of most students who had been mollycoddled far too long. But Williamson was beyond help and could only shrug.

Even when he’s trying to sound like he knows what he’s doing, he oozes pathos. On days like this, he looks like a walking resignation letter.