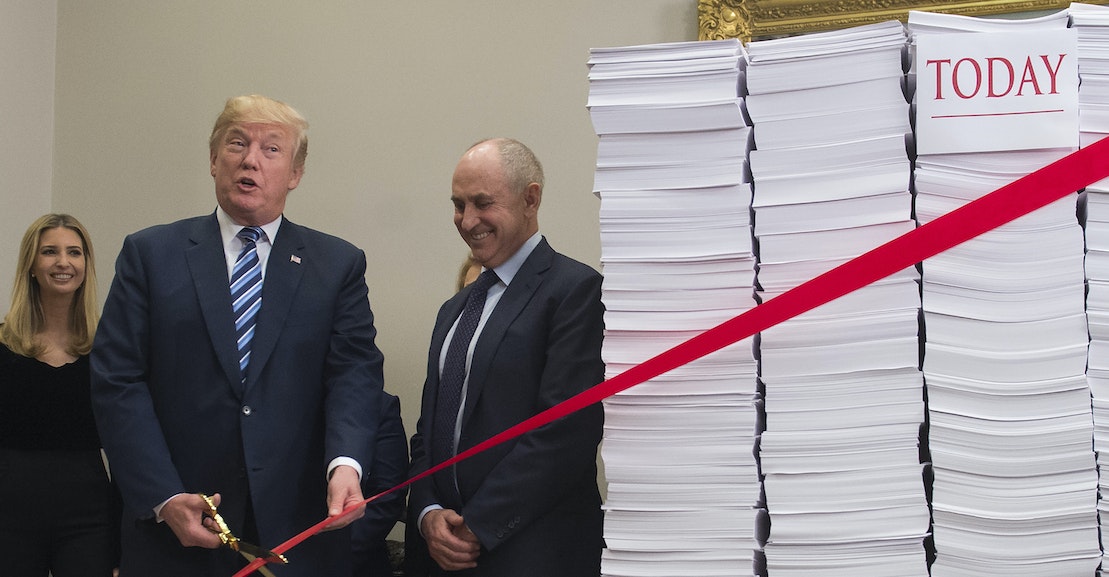 Donald Trump’s previously undisclosed tax records, the subject of so much Democratic speculation since 2016, are finally public, thanks to a New York Times report released over the weekend. It was hardly a shock to learn that Trump—estimated by Forbes to be worth around $2.5 billion—had paid a scant $750 in income taxes in 2016, and nothing at all during 10 of the 15 years prior to that. (For contrast, supposedly freeloading undocumented workers paid an estimated $12 billion to Social Security through payroll taxes in 2010.) Perhaps even less of a shock was that none of Trump’s tax shirking appeared to be illegal, strictly speaking. As the Times noted, Trump—or rather, his accountants and lawyers—had simply taken full advantage of various tax loopholes, including an Obama-era business deduction that allowed him to obtain millions in refunds for business losses incurred in prior years.

As expected, some of Trump’s critics have seized upon his taxes (or lack thereof) as proof of his incompetence as a businessman, and by extension, a president. That’s undoubtedly true, but it’s unlikely that anyone would find that revelatory by now. What the Times expose made plain is the fact that our current tax system was more or less designed for this. Far from leeching off the rich or punishing them for their success, as Republicans perennially claim—taxation in this country is a deeply regressive arrangement that enables the wealthiest individuals to hoard their money at the expense of everyone else. The real bombshell would have been if Trump had done something other than what the system allows. As he said in 2016 and would likely say again today: “That makes me smart.”

As economists Emmanuel Saez and Gabriel Zucman have found, in 2018, billionaires were essentially able to pay a lower tax rate than the bottom half of American households as a result of decades of tax cuts for the rich and flimsy laws concerning the offshoring of profits and other wealth. The overall effect has been a state starved of money it could have used to fund robust public services (or successfully weather a pandemic), as well as an effective massive upward transfer of wealth. Trump’s 2017 tax cuts for corporations and the wealthy only exacerbated the trend. “As a group, and although their individual situations are not all the same, the Trumps, the Bezoses and the Buffetts of this world pay lower tax rates than teachers and secretaries do,” Saez and Zucman wrote last year. “This is the tax system of a plutocracy.”

Even the mechanisms that are meant to enforce compliance with existing tax law more often punish the poor than they rein in the rich. A few years ago, ProPublica found that the IRS was more likely to audit an individual making $20,000 than someone making $400,000. That cruel phenomenon is itself one consequence of austerity; as the IRS admitted to Congress last year, it requires far fewer resources to audit people with no money than it does to audit people with too much of it, and Republicans have successfully chipped away at the IRS budget over the last decade. While Trump was able to claw back massive refunds thanks to business deductions, working class people who have found themselves subject to IRS audits are left without much-needed cash. “You expect this money during tax season and you don’t get it,” Paul McCaw, a forklift operator whose refunds were withheld for several years in a row due to audits, told ProPublica. “It tears you down.”

Because there are plenty of reasons for most people to loathe the tax system, it sometimes seems like the perfect, poisonous stew for Republicans to continue gunning for tax cuts, even if their general anti-tax stance is just cover for a program of upward wealth redistribution. Some conservatives are naturally now attempting to take advantage of that distrust to further push an agenda of so-called tax reform in the wake of the Trump tax revelations. “Wouldn’t it be great to only give $750 a year to the IRS?” RedState editor Joe Cunningham wrote on Monday. “Think of how much of your income you could be stockpiling in order to actually do some good for yourselves and your families.”