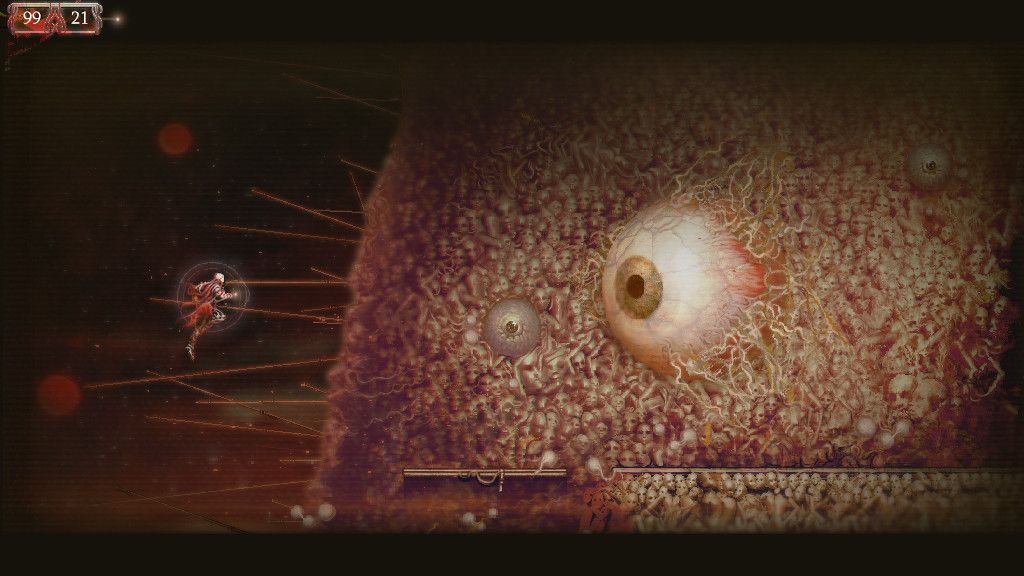 From the creators of Saturn Quest: Shadow of Planetus comes another surreal, vaguely discomforting action game. You play as a “nameless undead demon” in Cube Gothic, which adds a grotty pixelated gothic veneer to a fairly well-trodden genre. This undead demon needs to scale a Dark Tower in order to vanquish the vampire awaiting at the top. Apparently there are some puzzle elements here, and the difficulty has been balanced to cater for everyone—not such schmup masochists. It also has “a surreal story that makes sense” which, well, you can be the judge of that.

For fans of Slay the Spire and Monster Train, Against the Moon is a turn-based strategy game that has you working to destroy the moon. The reason you have to destroy the moon (like you need one) is because the Furos have settled there, weird creatures that are threatening a post-apocalyptic Earth. As you’d expect from a game that cites Slay the Spire as inspiration, there’s deckbuilding, but each card has two evolution paths, and there’s a handful of “epic heroes” in your squad, each with their own unique strengths and weaknesses.

Port Royale 4 is a historical strategy game about taking control of the Caribbean and, as a result, controlling its trade. Set in the 17th century, you can play as Spain, England, France or the Netherlands, and as you’ve probably guessed, it’s not just about developing and maintaining trade routes: you’ll be fighting to protect them, too. This fourth instalment adds turn-based naval battles, so expect some tricky tactical maneuvering in this colonizer sim.

Shrine II is basically a total conversion mod for the original Doom, except it’s available as a free standalone on Steam now. It’s definitely worth a look even if you only have a cursory interest in retro shooters: the art style is a whole lot more cartoony than OG Doom, and it comes with modern comforts like mouse look. There are 32 levels, 20 weapons, 30 enemies and tonnes of secrets. Did I mention it’s free?  You don’t even have to own Doom.

Here’s an atmospheric terminal-based horror game that might appeal to folk who loved Hacknet. Like that game, you’re interacting with an “old computer” with text commands in order to fix a server. The problem is, something creepy has apparently inhabited this old server, something very, very scary. I’m a sucker for games like this: the ye olde DOS aesthetic lends itself well to eldritch horror.

These games were released between September 21 and 28 2020. Some online stores give us a small cut if you buy something through one of our links. Read our affiliate policy for more info. ‌