What’s the mood in Brussels at the moment?

DB It has been a peculiar few weeks and it would be fair to say that EU officials in the European commission, diplomats working for the member states and poor beleaguered journalists have been left a tad confused. Downing Street’s plan to unilaterally rewrite the withdrawal agreement came out of nowhere. Some wondered whether it was part of a very clever British strategy. But that was only those who haven’t been closely caught up in the negotiations over the last four years. The EU’s negotiators concluded some time ago that the British government flies somewhat by the seat of its collective pants.

The EU will continue to say that Britain’s conduct has been unacceptable, but the reality is that the government has somewhat backed down. The controversial internal market bill won’t go to the House of Lords until very close to the end of the transition period. That gives plenty of time for all the outstanding issues on the withdrawal agreement to be resolved and a trade and security deal to be sorted too – if Boris Johnson still wants it.

How does a journalist retain focus for a story that drags on for years like this?

DB The Brexit story is quite circular. The pattern is for there to be lots of colourful rhetoric, the setting of unpinkable red lines and the issuing of unforgiving deadlines ahead of a messy compromise being found at one minute past the deadline. You can get cynical when you hear the hollow threats from either side for the millionth time. But the truth is that I will be forever grateful for the opportunity to be right at the heart of one of the biggest stories of my lifetime, with extraordinary access to all the big players. I have to thank the British government for enlivening affairs throughout.

LOC My job over the past four years has been reporting Brexit from outside the political cauldrons of Westminster and Brussels.

Keeping on top of the minutiae is the easy bit: it’s getting to the heart of the matter that is often difficult

We identified Northern Ireland and EU citizens rights immediately as two of the biggest issues and because of the Guardian’s historical interest in Ireland I had the freedom to keep reporting on the issue. The EU was taking a big interest while the UK seemed to be so disengaged. Michel Barnier had made several visits before Theresa May finally arrived to talk to border communities, but then her whereabouts were kept secret to the last minute. Downing Street’s approach seemed to be very much concentrated on the Westminster play rather than Dublin or Belfast. The day after, May addressed businesses in Belfast and I had arranged an interview with one of the attendees beforehand. Mid-flow, I was tapped on the shoulder and asked to leave by a Northern Ireland Office aide, as Downing Street had not agreed to this. I remember a fellow hack from Sky News laughing about the “North Korean press ops”.

It was all in such contrast to the EU side. A photo of Barnier shaking my hand after mistaking me for a farming representative on the Irish border still makes me chuckle. It was May 2017 and the reporting was already intense. I think I had been in Germany the same week meeting Brits in Munich who were concerned that they would end up being “landlocked” in the country that same week.

It is the variety and unpredictability of the report that makes the job endlessly interesting. I love it. But what journalists don’t tell you often is how rewarding the job can be, especially when you can make a difference to people’s lives. I remember when we wrote a story about a Dutch woman, Monique Hawkins, who had been told to make preparations to leave the country after she had been in the UK for 24 years. It got more than 1m page views and opened a whole new front in our reporting, as it emerged that many other EU citizens were anxious about their future post-Brexit and had thought they had to seek permanent residency cards. Although freedom of movement still pertained, the Home Office never made this clearto them.

What do you do to keep on top of the minutiae?

DB It is like any story. You have to read absolutely everything that is published on the subject – whether it is a treaty or a tweet. And talk, talk, talk to as many people as possible. There are constant clues as to where the negotiation is going, the nature of the coming implosion or possible solution being crafted. There aren’t any short cuts but it is all there for the taking.

LOC Keeping on top of the minutiae is the easy bit: it’s getting to the heart of the matter that is often difficult. While Brussels correspondents get on-the-record briefings from Barnier and others, there has been no such equivalent in the UK. In the last four years, I think I have been invited to just two on-the-record government briefings on Brexit.

How do you make Brexit still exciting for the average reader?

DB I must admit that I thought it might be a challenge this year. It didn’t need to be exciting. An extension of the transition period would have killed this story for some time. But, again, thanks to Downing Street, there has been much of a challenge in keeping readers interested. The government needlessly set itself a ridiculously tight deadline, erected a series of unnecessary obstacles and then shot themselves in the foot as we were coming to the finish line. Thank you, prime minister. 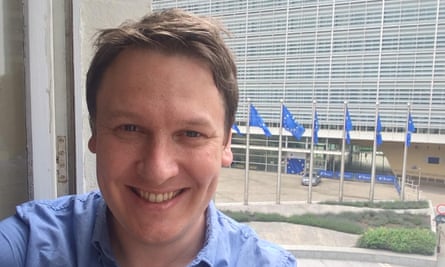 Daniel Boffey in Brussels: ‘The consequences of a no-deal Brexit are too severe for it to be a real option, for all that the government suggests otherwise.’ Photograph: Daniel Boffey

What was your most bizarre Brexit moment?

DB When the little-known Belgian MEP Philippe Lamberts walked out of a breakfast with Jean-Claude Juncker on 4 December 2017 and casually blew up the Brexit negotiations. A few of us were waiting outside the European commission and he ambled up to reveal how the British government had bowed to the Republic of Ireland’s demand that Northern Ireland stay aligned with key EU laws and regulations after Brexit, so as to ensure that a hard border did not return to the island. Philippe has a photographic memory. He was able to provide every word and comma of what had been agreed and what Theresa May was going to sign up to later that day. Within moments of that being made public, the compromise was over. May took a very angry call from the DUP leader, Arlene Foster, during her lunch with Juncker. Chaos ensued. She didn’t even stay for coffee: it was back to Downing Street.

LOC I remember this day very well. I had been sent to Dublin for two weeks to cover the negotiations and was gathered with a group of fellow journalists outside government buildings in the bitter cold waiting for the briefing on the formal ending of the first phase of negotiations. Word came out from the taoiseach’s office that there had been a delay, then another. A friend beckoned me over to the hotel opposite where one of Ireland’s top Brussels officials was having a cup of coffee. What’s happening, I asked. “They mustn’t have squared things with the DUP,” he replied. As the Irish know from decades of negotiations, you always have to square things with the DUP. By Friday, the DUP had a paragraph to satisfy their concerns about east-west trade stitched into the deal. And in those few words the seeds were sown for the conflict over “unfettered access” to GB that mars Brexit talks to this day.

Where do you think it will all end?

DB I think a deal will emerge at the end of October or beginning of November. The outstanding issues are resolvable. The consequences of a no-deal Brexit are too severe for it to be a real option, for all that the government suggests otherwise. The deal will not be great. Brexit means paperwork. But there will be some “closure”.

Both the main negotiators, Michel Barnier and David Frost, contracted the virus, so that certainly slowed things down

LOC I think there will be a deal, and the question now is how do both the UK and the EU engineer that with the threat of legal action hanging over negotiations. While there are some in Downing Street who believe that no-deal is tolerable, if not desirable, I think after last October’s summit with Leo Varadkar, Boris Johnson has shown that he can embrace a deal when it suits him.

How has Covid affected Brexit discussions? Should departure be delayed?

DB Both the main negotiators, Michel Barnier and David Frost, contracted the virus, so that certainly slowed things down. I think relationships took a while to foster as there wasn’t the normal time and space to get to know each other. It might sound silly, but that sort of thing matters. The EU capitals have not been as focused on the negotiations, of course. Downing Street thinks this has had an impact. I am not so sure. I don’t recall too many previous examples of the member states flying in to barge Barnier out of the way to find a pragmatic compromise.

Do you think getting Brexit done will restore trust in the government?

DB In some ways Brexit will never be done. The treaty they are negotiating now will be improved upon and fought over. Britain and the EU will be in a constant negotiation. But the end of this year is obviously going to take the story off the front pages. That might be a relief to the government. But I am not so sure the coronavirus headlines are any more welcome.

Are the public ready to move on now, or still divided?

DB It depends a lot on how our politicians act. I think for all sorts of reasons, not least electoral ones, Keir Starmer will work to move the debate on to issues other than Europe and migration. I think the debate has moved on from leave and remain. But the social fissures that have been revealed by Brexit are not going anywhere. And I wonder whether it is in Boris Johnson’s interests to have a less divisive politics.