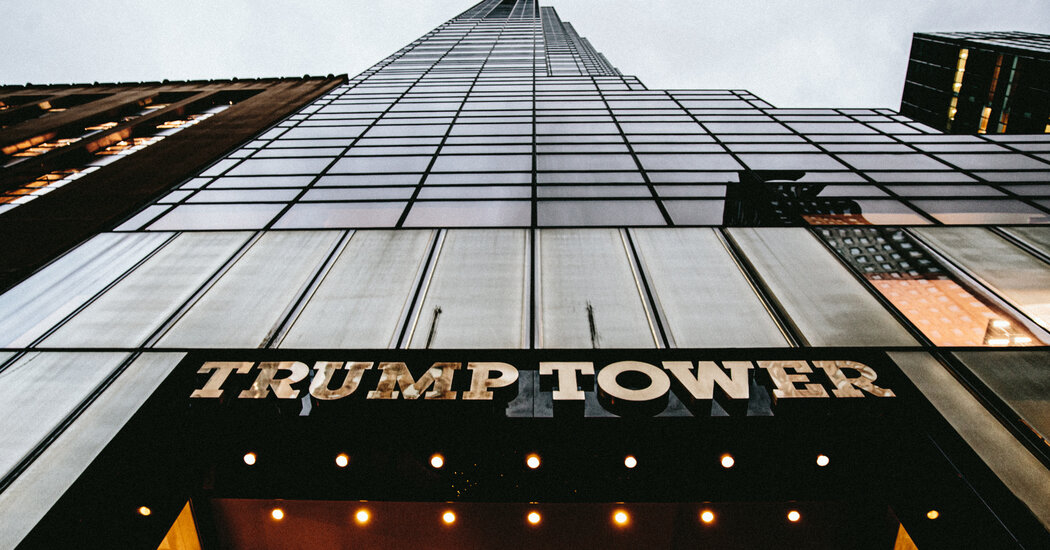 The New York Times has obtained tax-return data for President Trump and his companies that covers more than two decades. Mr. Trump has long refused to release this information, making him the first president in decades to hide basic details about his finances. His refusal has made his tax returns among the most sought-after documents in recent memory.

Among the key findings of The Times’s investigation:

It is important to remember that the returns are not an unvarnished look at Mr. Trump’s business activity. They are instead his own portrayal of his companies, compiled for the I.R.S. But they do offer the most detailed picture yet available.

Below is a deeper look at the takeaways. The main article based on the investigation contains much more information, as does a timeline of the president’s finances. Dean Baquet, the executive editor, has written a note explaining why The Times is publishing these findings.

Mr. Trump has paid no federal income taxes for much of the past two decades.

He has managed to avoid taxes while enjoying a the lifestyle of a billionaire — which he claims to be — in which his companies cover the costs of many personal expenses.

This tax avoidance sets him apart from most other affluent Americans.

Taxes on wealthy Americans have declined sharply over the past few decades, and many use loopholes to reduce their taxes below the statutory rates. But most affluent people still pay a lot of federal income tax.

Over the past two decades, Mr. Trump has paid about $400 million less in combined federal income taxes than a very wealthy person who paid the average for that group each year.

His tax avoidance also sets him apart from past presidents.

Mr. Trump may be the wealthiest U.S. president in history. Yet he has often paid less in taxes than other recent presidents. Barack Obama and George W. Bush each regularly paid more than $100,000 a year — and sometimes much more — in federal income taxes while in office.

Mr. Trump, by contrast, is running a federal government to which he has contributed almost no income tax revenue in many years.

A large refund has been crucial to his tax avoidance.

Mr. Trump did face large tax bills after the initial success of “The Apprentice” television show, but he erased most of these tax payments through a refund. Combined, Mr. Trump initially paid almost $95 million in federal income taxes over the 18 years. He later managed to recoup most of that money, with interest, by applying for and receiving a $72.9 million tax refund, starting in 2010.

The refund reduced his total federal income tax bill between 2000 and 2017 to an annual average of $1.4 million. By comparison, the average American in the top .001 percent of earners paid about $25 million in federal income taxes each year over the same span.

The $72.9 million refund has since become the subject of a long-running battle with the I.R.S.

When applying for the refund, he cited a giant financial loss that may be related to the failure of his Atlantic City casinos. Publicly, he also claimed that he had fully surrendered his stake in the casinos.

But the real story may be different from the one he told. Federal law holds that investors can claim a total loss on an investment, as Mr. Trump did, only if they receive nothing in return. Mr. Trump did appear to receive something in return: 5 percent of the new casino company that formed when he renounced his stake.

In 2011, the I.R.S. began an audit reviewing the legitimacy of the refund. Almost a decade later, the case remains unresolved, for unknown reasons, and could ultimately end up in federal court, where it could become a matter of public record.

Mr. Trump classifies much of the spending on his personal lifestyle as the cost of business.

His residences are part of the family business, as are the golf courses where he spends so much time. He has classified the cost of his aircraft, used to shuttle him among his homes, as a business expense as well. Haircuts — including more than $70,000 to style his hair during “The Apprentice” — have fallen into the same category. So did almost $100,000 paid to a favorite hair and makeup artist of Ivanka Trump.

All of this helps to reduce Mr. Trump’s tax bill further, because companies can write off business expenses.

Mr. Trump bought the estate, which stretches over more than 200 acres in Bedford, N.Y., in 1996. His sons Eric and Donald Jr. spent summers living there when they were younger. “This is really our compound,” Eric told Forbes in 2014. “Today,” the Trump Organization website continues to report, “Seven Springs is used as a retreat for the Trump family.”

Sign up for On Politics to get the latest election and politics news and insights.

Nonetheless, the elder Mr. Trump has classified the estate as an investment property, distinct from a personal residence. As a result, he has been able to write off $2.2 million in property taxes since 2014 — even as his 2017 tax law has limited individuals to writing off only $10,000 in property taxes a year.

Across nearly all of his projects, Mr. Trump’s companies set aside about 20 percent of income for unexplained ‘consulting fees.’

These fees reduce taxes, because companies are able to write them off as a business expense, lowering the amount of final profit subject to tax.

His daughter appears to have received some of these consulting fees, despite having been a top Trump Organization executive.

The Times investigation discovered a striking match: Mr. Trump’s private records show that his company once paid $747,622 in fees to an unnamed consultant for hotel projects in Hawaii and Vancouver, British Columbia. Ivanka Trump’s public disclosure forms — which she filed when joining the White House staff in 2017 — show that she had received an identical amount through a consulting company she co-owned.

Many of the highest-profile Trump businesses lose large amounts of money.

Since 2000, he has reported losing more than $315 million at the golf courses that he often describes as the heart of his empire. Much of this has been at Trump National Doral, a resort near Miami that he bought in 2012. And his Washington hotel, opened in 2016, has lost more than $55 million.

An exception: Trump Tower in New York, which reliably earns him more than $20 million in profits a year.

The most successful part of the Trump business has been his personal brand.

The Times calculates that between 2004 and 2018, Mr. Trump made a combined $427.4 million from selling his image — an image of unapologetic wealth through shrewd business management. The marketing of this image has been a huge success, even if the underlying management of many of the operating Trump companies has not been.

Other firms, especially in real estate, have paid for the right to use the Trump name. The brand made possible the “The Apprentice” — and the show then took the image to another level.

Of course, Mr. Trump’s brand also made possible his election as the first United States president with no prior government experience.

But his unprofitable companies still served a financial purpose: reducing his tax bill.

The Trump Organization — a collection of more than 500 entities, virtually all of them wholly owned by Mr. Trump — has used the losses to offset the rich profits from the licensing of the Trump brand and other profitable pieces of its business.

The reported losses from the operating businesses were so large that they often fully erased the licensing income, leaving the organization to claim that it earns no money and thus owes no taxes. This pattern is an old one for Mr. Trump. The collapse of major parts of his business in the early 1990s generated huge losses that he used to reduce his taxes for years afterward.

With the cash from ‘The Apprentice,’ Mr. Trump went on his biggest buying spree since the 1980s.

“The Apprentice,” which debuted on NBC in 2004, was a huge hit. Mr. Trump received 50 percent of its profits, and he went on to buy more than 10 golf courses and multiple other properties. The losses at these properties reduced his tax bill.

But the strategy ran into trouble as the money from “The Apprentice” began to decline. By 2015, his financial condition was worsening.

His 2016 presidential campaign may have been partly an attempt to resuscitate his brand.

The financial records do not answer this question definitively. But the timing is consistent: Mr. Trump announced a campaign that seemed a long shot to win, but was almost certain to bring him newfound attention, at the same time that his businesses were in need of a new approach.

The presidency has helped his business.

Since he became a leading presidential candidate, he has received large amounts of money from lobbyists, politicians and foreign officials who pay to stay at his properties or join his clubs. The Times investigation puts precise numbers on this spending for the first time.

A surge of new members at the Mar-a-Lago club in Florida gave him an additional $5 million a year from the business since 2015. The roofing materials manufacturer GAF spent at least $1.5 million at Doral in 2018 as its industry was seeking changes in federal regulations. The Billy Graham Evangelistic Association paid at least $397,602 in 2017 to the Washington hotel, where it held at least one event during its World Summit in Defense of Persecuted Christians.

In his first two years in the White House, Mr. Trump received millions of dollars from projects in foreign countries, including $3 million from the Philippines, $2.3 million from India and $1 million from Turkey.

But the presidency has not resolved his core financial problem: Many of his businesses continue to lose money.

With “The Apprentice” revenue declining, Mr. Trump has absorbed the losses partly through one-time financial moves that may not be available to him again.

In 2012, he took out a $100 million mortgage on the commercial space in Trump Tower. He has also sold hundreds of millions worth of stock and bonds. But his financial records indicate that he may have as little as $873,000 left to sell.

He will soon face several major bills that could put further pressure on his finances.

He appears to have paid off none of the principal of the Trump Tower mortgage, and the full $100 million comes due in 2022. And if he loses his dispute with the I.R.S. over the 2010 refund, he could owe the government more than $100 million (including interest on the original amount).

He is personally on the hook for some of these bills.

In the 1990s, Mr. Trump nearly ruined himself by personally guaranteeing hundreds of millions of dollars in loans, and he has since said that he regretted doing so. But he has taken the same step again, his tax records show. He appears to be responsible for loans totaling $421 million, most of which is coming due within four years.

Should he win re-election, his lenders could be placed in the unprecedented position of weighing whether to foreclose on a sitting president. Whether he wins or loses, he will probably need to find new ways to use his brand — and his popularity among tens of millions of Americans — to make money.