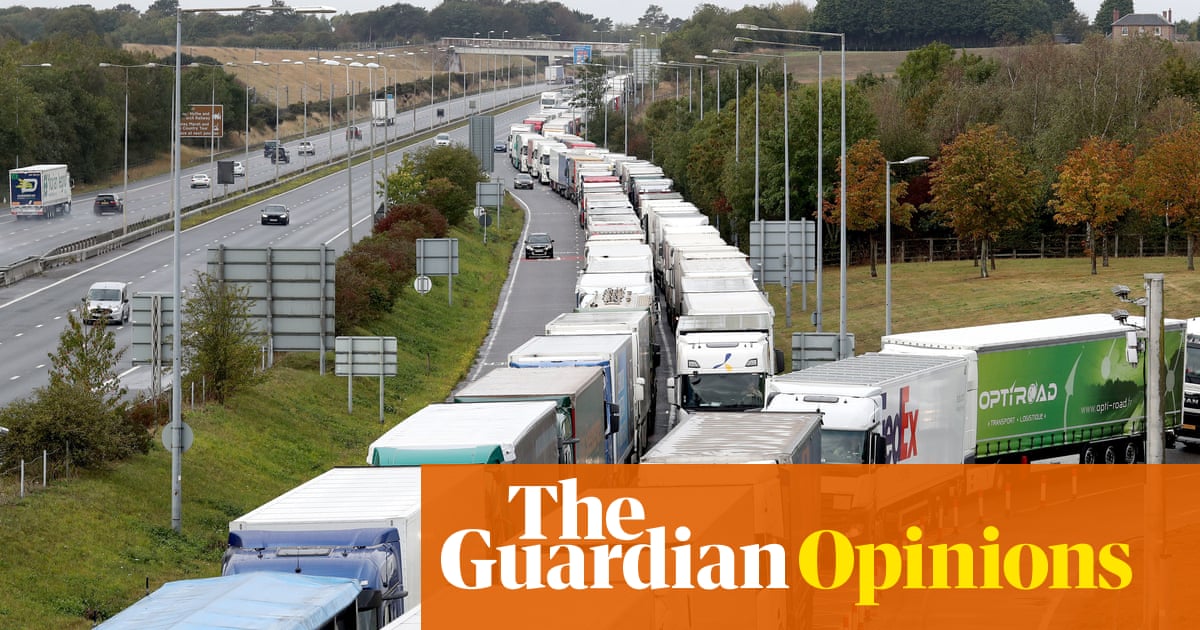 It was only a matter of time. Trump’s rallying cry of “build a wall” – so succinct, so quotable – has made it across the pond. Now we can build our own wall. In Kent. Come January, we’ll triumphantly take back control of our borders – something Michael Gove has wholeheartedly embraced, announcing this week that truckers will need a “Kent access permit” to get into the county from 1 January. So, basically a passport then.

The de-facto border has been posed as the answer to the predicted chaos, or in official parlance the “reasonable worst-case scenario”, when the UK departs from the single market next year – including queues of up to 7,000 lorries in Kent. That’s around 100 miles of traffic, and two-day delays on both sides of the Channel – and not just for hauliers. Forget about jumping on the Eurostar and grabbing lunch at Brasserie Bellanger (pandemic permitting). According to a report drawn up by the Border and Protocol Delivery Group, passengers could also be forced to wait an extra two hours for Eurostar trains.

Naturally, Gove cares deeply about the impact on the people of Kent, saying the system will be implemented through “… policing, ANPR cameras and other means, [and] we will do our very best to ensure that … constituents [in Kent] are not inconvenienced”. But even the Road Haulage Association is scratching its head about what those “other means” could possibly be, let alone the police work needed for enforcement.

Rosie Duffield, MP for Canterbury – a constituency that also encompasses Whitstable, where I live – is the only opposition MP in Kent’s 17 constituencies. Gove once informed her he loves Whitstable oysters. “Well, save them then!” said Duffield in exasperation. As things stand, Whitstable’s most famous export could be doomed to rot in the back of delayed trucks.

Duffield is “apoplectic” about the proposed permits and the havoc they will cause, particularly for smaller, independent businesses, and on residents’ daily lives – the impact of increased traffic on hospital journeys is a particular worry. For the past three years, she says, Kent MPs have had their concerns dismissed.

And then there’s the air pollution – and tarmac. “Imagine walking your children to school past back to back lorries,” she says. Hundreds of them will need places to park. Already, a “Brexit lorry park” is planned in Ashford, with enough space for 2,000 trucks. “We’re supposed to be the garden of England, but we’re going to be the car park of England,” says Duffield.

There’s a certain irony in the fact 59% of people in Kent voted to leave at the 2016 referendum. As one Twitter user put it: “Kent voted heavily in favour of leaving the EU and now it’s basically a French car park. Tremendous.”

I moved to live by the sea in Whitstable 13 years ago, after spending 16 years in the capital. If I missed aspects of London – the art galleries, the ramen at Nanban – I could simply hop on a train and go back, I reasoned. For a while I commuted, enjoying my sophisticated double life – except the actual commuting. All that travelling just so I could go to Borough Market at lunchtime and pay a tenner for a falafel? No thanks. I work from home now, or, technically, from a small, shared space in a local social enterprise.

I love where I live, mostly – but there’s a reason some locals call the area “Whitstabubble”. Kent is a British monoculture, and divisions between “born and bred” locals and incomers are rife; a huge proportion of houses in Whitstable, for example, are second homes or holiday lets that are pricing locals out of their own town.

On hearing Gove’s plans for a Kent border, my first thought was, doesn’t Kent already have one, between rich and poor, remain and leave? Despite Margate’s reputation as “Shoreditch-on-Sea”, neighbouring Thanet has among the highest rates of child poverty in south-east England. Down the road in Whitstable, you can’t get to the beach on a sunny day thanks to crowds of visitors getting their fix of overpriced seafood. Hidden out of sight of our lovely cafes, bijou art galleries, craft beer bar and trendy bakery are areas of poverty and deprivation. The rate of reported hate crime in Kent has quadrupled since 2013-14, and Whitstable, remember, was where Nigel Farage rolled up to help local fishermen burn an effigy of Theresa May in protest at the Brexit negotiations in 2018.

Perhaps it’s time for Kent to pull together and embrace its new fate as an island inside the mainland. Thanet used to be cut off from the country. You can tell – it’s still strangely eerie and flat. And then there’s the Isle of Sheppy. An actual island, home to prisons, caravan parks and a charming cabin, featured on this website (and subsequently booked up until 2089). This, people of Kent, is our future. Build a wall. Implement a border. Separate Kent from the mainland, float it out to sea. It’s all good. We’ll be fine.

• Fay Schopen is a journalist based in Kent