On Thursday, Rishi Sunak announced his Winter Economy Plan, which brings to an end the furlough and self-employed job retention schemes. I agree that the government cannot continue to pay almost all of people’s salaries indefinitely, and that life has to return to normal sometime soon; this is taxpayers’ money and our country now owes more than it earns for the first time since 1963, borrowing more this year than at any point since the second world war. The government has robustly supported the British economy, NHS and workers during what is an unprecedented crisis.

But there is a gaping hole in the government’s economic plan: support for the live music and entertainment industry. The chancellor says that the government cannot be expected to protect every business and household – but the live music industry has been shut down, by law and circumstance, for more than six months.

We can go shopping, as long as we wear masks. We can exercise in the gym, as long as we book in advance. We can even have a meal in a restaurant or a pint in a pub, as long as we’re happy to go home at 10pm. But many theatres, jazz clubs, concert halls and comedy venues have remained shut the whole time, even after being allowed to reopen in mid-August. Social distancing rules have made it impossible for them to generate enough revenue to open up again, or to generate an atmosphere, and the 10pm curfew has made that even harder. Nightclubs are still forbidden from opening at all, and no one is going to hire a band when they are only allowed 15 people at their wedding.

The UK government has prevented us from going to our workplaces to earn a living, and there is no date on the horizon for venues reopening. So it is vital that the government lends a hand to get the industry through this tough time.

How can musicians and staff be paid when their bosses aren’t practically – or indeed legally – able to open up their places of work?

Around three quarters of people working in the music industry are self-employed and the new measures will require them to survive on just 20% of their usual salary until they are allowed to return to work. Musicians earn an average of £23,000 a year, well below the national average – I don’t know anyone who could survive on a fifth of that.

The rest who have salaried or contracted jobs, including the thousands of venue staff, technicians and more, will only receive government assistance if they are working and being paid for a third of their normal hours. How can they be paid or employed when their bosses aren’t practically – or indeed legally – able to open up their places of work?

Add to this the fact that the previous Self-Employed Income Support Scheme (SEISS) failed to provide coverage for 1.2 million people – almost a quarter of the self-employed workforce, including hundreds of West End and orchestral musicians – and it’s clear we risk doing substantial harm to the UK’s live music and cultural sector. Venues were the first businesses to shut their doors and will be the last to reopen them. No musician I know expects to be allowed to return to work until around the middle of 2021; a third of UK musicians are already considering leaving the industry.

The British music industry contributes more than £5bn to the economy each year, and that work generates huge tax revenues for the NHS and other public services. No musician I know wants a government handout – they are desperate to get back into the orchestra pit or on to the stage, and devastated to have had no music in their lives in 2020. 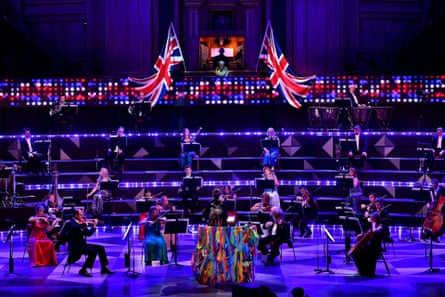 Socially distanced performers at the Last Night of the Proms 2020. Photograph: Chris Christodoulou/BBC/PA

We need government to work with the industry to find innovative ways to boost audience numbers and get bums on seats again, such as proposals to underwrite the cost of another seat each time a ticket is sold. But until the government makes it viable to open our places of work again, it is not unreasonable to expect extra targeted support to prevent them from failing. This could involve an industry-specific furlough scheme, further tax relief on top of the VAT holiday for the hospitality industry, and a better understanding of varied income sources for musicians and event staff, to allow greater eligibility for the SEISS.

This isn’t just about musicians’ livelihoods – it’s about the sort of country we want to live in when we are through this health crisis. Nobody wants to get through this only to find that we’ve got no live music to dance or sing along to, yet that’s exactly where we’re heading. Speaking as both a Conservative and a musician, that would be the most catastrophic self-inflicted market failure we could allow to happen.

A lot of attention has been paid to UK sport – and rightly so – but we’ve got to be equally vigilant when it comes to protecting music and culture. We must stop looking at music and the arts as some sort of light-hearted add-on to the government’s priorities. What musicians produce is what the rest of us consume when we have time off. It fosters cohesiveness, creativity and curiosity, and it is what the country lives for.

So let’s not decimate an entire industry, or expect – unfairly and shortsightedly – that musicians and live entertainers can survive on their own when they’re told they can’t go to work. Otherwise we will needlessly create thousands of job losses, rack up the welfare bill unnecessarily, and undermine generations of potential talent. Let’s support musicians and venues today because they will be instrumental tomorrow, not only in getting our country back on its feet again, but in reminding us what life is supposed to be about.