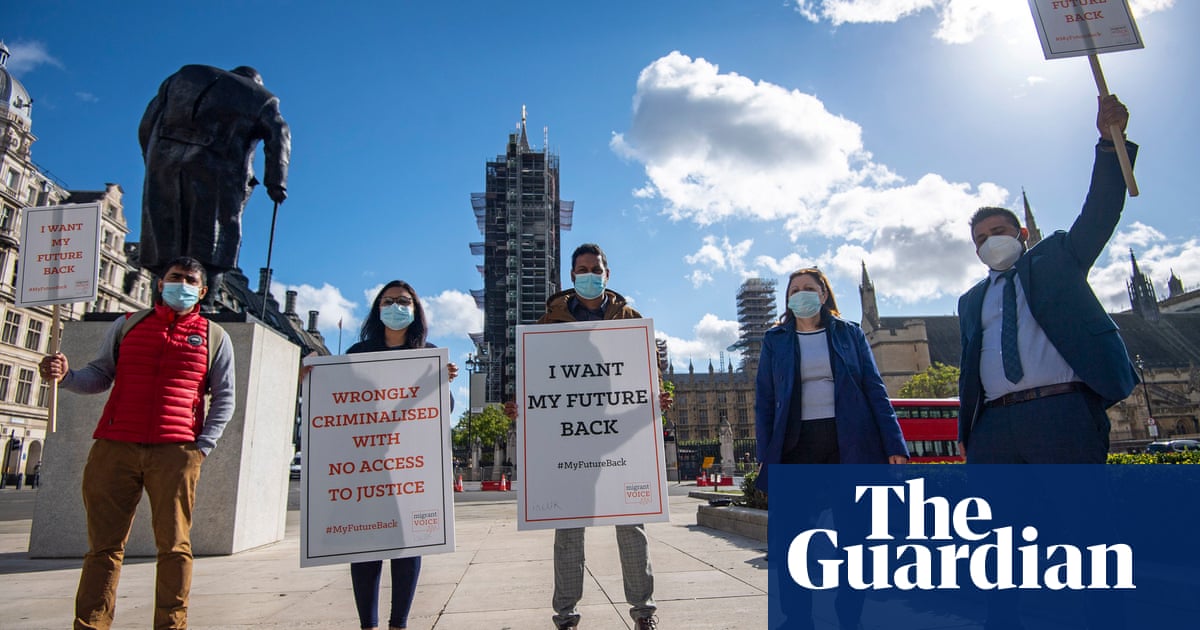 International students who lost their right to live and study in the UK after being wrongly accused of cheating in an English language test sent a letter to Downing Street on Thursday, as part of an ongoing campaign to clear their names.

The 200 students are some of about 34,000 accused by the Home Office of cheating in the English language tests they needed to pass in order to secure their visas. More than 1,000 students have been removed from the UK as a result of the accusation, and many were arrested and detained by immigration enforcement officers, but large numbers say they were wrongly accused.

“We were innocent but our visas were refused or revoked and the government gave us no way to defend ourselves. Our futures were destroyed and we were left to fight a years-long legal battle costing each of us tens of thousands of pounds,” the letter states. “The Home Office has stolen our futures, branding us frauds and forcing us to bear a lifelong mark of shame. Many of us are destitute, barely able to survive or care for our families, having spent everything we own trying to clear our names. Many of us are suffering from severe stress and depression. Some of us have even attempted to take our own lives because we see no other way out.”

Undercover filming by the BBC six years ago revealed cheating in two Home Office approved test centres, but campaigners say the Home Office was wrong to conclude that the vast majority of students who took the test in dozens of other centres all over the country had also cheated.

Acting on evidence from the private company that provided the tests, the Home Office concluded that 34,000 of the 58,458 students who had taken the test between 2011 and 2014 had definitely cheated, that a further 22,600 had “questionable results”, and that only 2,000 had definitely not cheated. Campaigners have questioned whether it is plausible that such a large proportion of students sitting a Home Office-approved test could have cheated.

Stephen Timms, the Labour MP for East Ham, who delivered the letter to Downing Street on behalf of the students, believes it is “implausible” that more than 90% of those who took the Home Office test were involved in cheating. Many of his constituents have been affected by the allegations. “It’s since become quite clear that many of those students probably most of them, were completely innocent of the charge that was made against them,” he said. “They have been in limbo in the five or six years ever since, they’re not allowed to study, they’re not allowed to work. Their money has gone, often their family’s life savings were invested in getting them a decent British education that’s been completely lost. I am appalled by the terrible hardship that has been inflicted on them by a false allegation that the British government simply accepted.”

A public accounts committee report concluded last year that the Home Office’s “flawed” handling and “rush to penalise” the students caused “injustice and hardship for many thousands of international students”.

‘I became suicidal’: students accused of cheating by UK tell of ‘living hell’

The charity Migrant Voice has been supporting many of the students during their protracted campaign for justice. Director Nazek Ramadan said: “There is a mountain of evidence that proves they are victims of a mammoth injustice – and the government can ignore this no longer.”

Parallels have frequently been drawn between the Home Office’s treatment of these students and the department’s treatment of the Windrush generation. The former home secretary Sajid Javid promised to review the students’ treatment in the wake of the Windrush scandal, but this commitment was subsequently dropped. The home secretary Priti Patel’s commitment earlier this year to adopt the recommendations of an internal inquiry into the causes of Windrush, gave students cause to hope that their cases might be viewed more compassionately. The Windrush inquiry found that the Home Office was characterised by a “culture of disbelief and carelessness” and that there was a “lack of empathy for individuals”, and concluded that the department needed to introduce “systemic and cultural change”. However the new permanent secretary at the Home Office, Matthew Rycroft, last week indicated a reluctance to look at the issue again.

“My heart goes out to people who are innocent who were caught up in this,” Rycroft told a public accounts committee hearing, but he defended the department’s decision at the time “to clamp down” in response to “systemic fraud”.