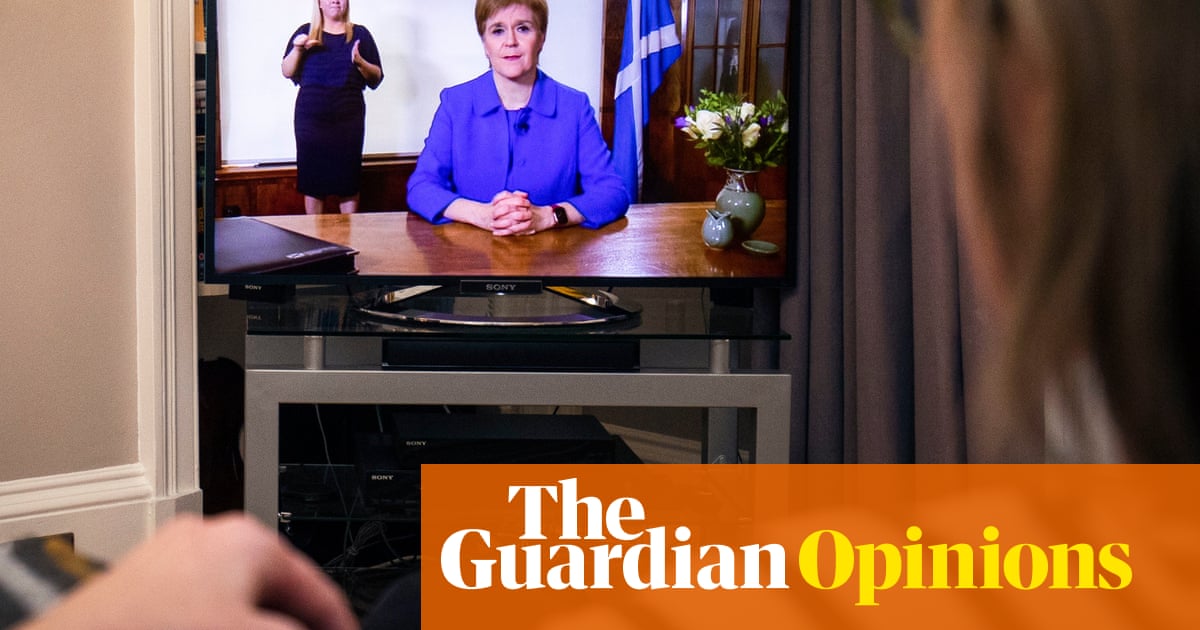 Pro-UK Scots are tired, angry and confused. They are convinced the last six months should have exposed what they see as the fundamental foolishness at the heart of Nicola Sturgeon’s campaign to break up Britain. Instead, the Scottish first minister’s approval ratings have soared, support for independence is at a record high and a creeping sense of dread among unionists has morphed into something closer to blind panic.

Their discomfort has been occasioned by the way public attitudes have shifted during the coronavirus pandemic. In particular, they are unsettled by the overwhelmingly positive response to Sturgeon’s ubiquitous presence on television as the figurehead of the nation’s fight against Covid-19.

In a recent interview with my newspaper, the Courier, psephologist John Curtice said the virus has been the key driver in changing minds on the constitution. “Certainly there has been a further increase in support for independence since coronavirus kicked in, and that is why we are now at an average of around 53-47 [percent in favour],” he added.

Covid-19 seems to have caused a strange distillation of the whole independence debate. Complicated questions about economics, currency, Scotland’s place in the world and the risks of breaking the bonds of three centuries of shared history have been reduced to a much simpler question: Nicola Sturgeon or Boris Johnson?

Hundreds of thousands of Scots were given a vivid insight into that choice on Tuesday night, when they tuned in to consecutive broadcasts on primetime BBC. At 8pm, Boris Johnson’s Downing Street address explaining changes to coronavirus restrictions in England aired in Scotland, as it did throughout the rest of the UK. But once the prime minister had finished speaking, Scottish viewers received a second broadcast, from Sturgeon.

The contrast between the two was subtle but significant. Johnson appeared to blame the recent surge of cases on people not sticking to the rules, and suggested more stringent enforcement action would be required if this didn’t change. Sturgeon, meanwhile, used warm and emotional language that was radically different to the traditional macho discourse of the political world. “Let’s keep going, try to keep smiling, keep hoping and keep looking out for each other,” she said. “Be strong, be kind and let’s continue to act out of love and solidarity.”

Based on those words, you would never have guessed it was actually Sturgeon who was imposing the more draconian measures of the two. Johnson’s announcement effectively amounted to pubs shutting a little earlier, but was cast in language that saw one excitable commentator insist the country was on the brink of martial law. Sturgeon, on the other hand, banned all of Scotland from visiting the homes of friends and family but sweetened the message with a rhetorical hug that helped cement the country’s support for the new rules and, crucially, her leadership.

But it wasn’t simply Sturgeon’s skills as a communicator that spelt trouble for her political opponents – even the very existence of a separate broadcast was a big boost to her cause. Once the SNP leader had finished speaking on Tuesday night, the presenters reminded viewers that it was the measures outlined by the Scottish first minister that were relevant north of the border. What Johnson had to say didn’t actually apply up here. This was, on a practical level, an important factual point. It also felt deeply revealing on a symbolic level. For the first time since the creation of the Scottish parliament in 1999, the role of first minister seemed more important to the day-to-day lives of ordinary Scots than that of UK prime minister.

A similar phenomenon has been evident in the daily televised briefings that have been a fixture of the BBC Scotland schedule since late March. Regardless of their usefulness as a public information tool, there is no doubt Sturgeon has seized the opportunity to connect with the public with skill and vigour. This has infuriated opposition politicians, who have complained about the format, the quality of questioning from the journalists and the lack of a similar platform for others.

They are also dismayed that the first minister has been able to keep the conversation on Covid to the exclusion of all other topics. The trial of former first minister Alex Salmond on a series of sexual assault charges should have been the biggest news story of the year. As it turned out, it wasn’t even the biggest story of the day. Salmond’s dramatic acquittal on all charges came on 23 March – the very afternoon that Johnson officially announced the UK was going into lockdown. Although the ramifications of this ugly saga have been put on hold by Covid-19 they could still prove extremely damaging to Sturgeon, whose allies Salmond believes were involved in a plot to destroy him.

Any public inquiry into Covid-19 is also potentially dangerous for Sturgeon’s reputation. The charge sheet against the Scottish government over coronavirus is a familiar one: a devastating number of care home deaths, failures on PPE and testing and not locking down early enough. Will the gaze of hindsight judge the first minister more harshly than today’s viewer of the daily briefing? Time will tell.

Unionists hope that voters’ attention will revert to the SNP’s patchy domestic record and flimsy prospectus for independence before the Scottish parliamentary election in May. There is also the troubling question of how Scotland could navigate the economic chaos caused by the pandemic on its own.

Yet the polls suggest the trust and goodwill generated by Sturgeon during this crisis has led many voters to conclude Scotland would have dealt with coronavirus more successfully if it had been independent. You don’t need to be John Curtice to work out where that thought may lead.

• David Clegg is editor of the Dundee-based newspaper the Courier