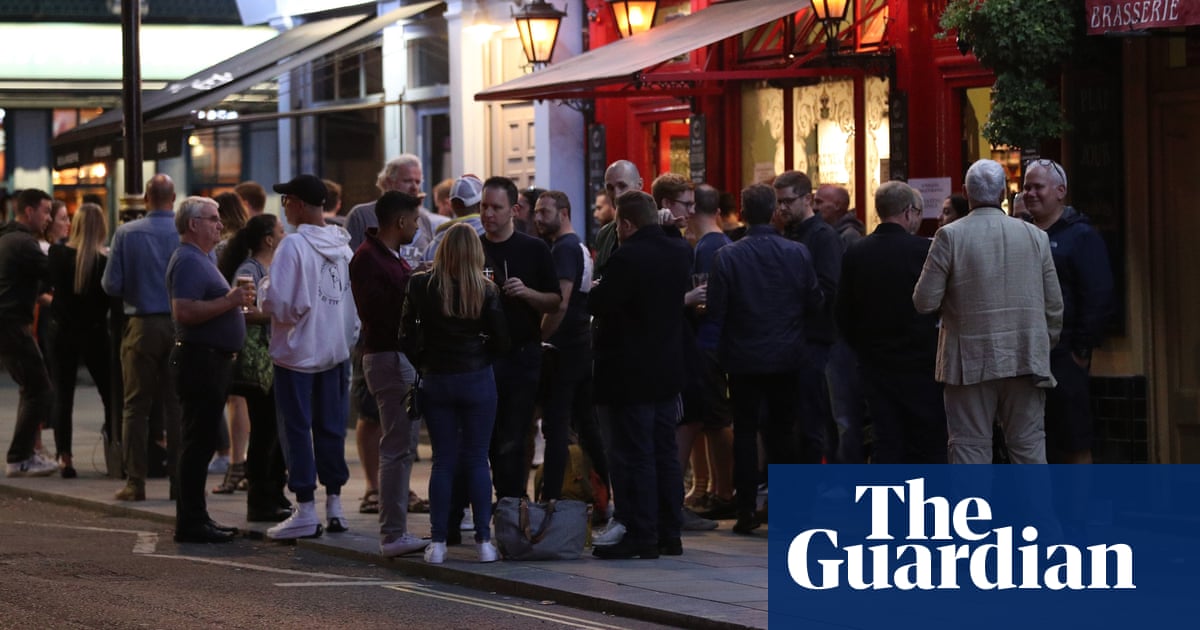 Pubs, bars and restaurants in England will have to shut by 10pm from Thursday under new nationwide restrictions to halt an “exponential” rise in coronavirus cases.

Police have also been handed powers to issue £1,000 fines and make arrests to enforce 2 metre social distancing in pubs and restaurants, the Guardian has learned. Boris Johnson is expected to make an address to the nation on Tuesday setting out the new measures.

With cases doubling every week across the UK and a second wave expected to last up to six months, health officials had advised the government over the weekend to “move hard and fast”, according to a source. Meanwhile, the Treasury was concerned that many businesses had “no buffer” to withstand a significant new economic hit.

The UK’s Covid-19 alert level was raised to four on Monday, meaning the virus is “high or rising exponentially” – a move which gave Johnson cover for renewed action.

Hospitality venues in England will have to close their doors at 10pm and offer table service only from Thursday.

Yet the new measures are softer than those mooted in advice from government scientific advisers in recent weeks, which had included a two-week full lockdown as a “circuit-breaker” to halt the exponential increase in infections.

The new rules fall short of what some senior local leaders had been expecting, it is understood, and there are concerns that they will not change behaviour significantly. Northern Ireland is going further by banning all mixing between different households indoors.

Bars warned that their earnings would be hit by the 10pm curfew, however. Dean Mac, founder of the cocktail bar 186 in Manchester, told the Manchester Evening News: “10pm is our peak time for customers and where we earn around 60% of our daily takings.”

In a televised address on Monday, the government’s chief scientific and medical advisers warned that the UK had “turned a corner” for the worse and was on course for up to 50,000 new cases of Covid-19 a day by mid-October – up from 6,000 now – which could lead to 200 deaths a day by the following month.

The health secretary, Matt Hancock, has repeatedly emphasised the seriousness of the rise in infections over recent days and said the change in Covid alert level “reflects the significant shift in the current threat posed by coronavirus”. He added: “This country now faces a tipping point in its response and it is vital everybody plays their part now to stop the spread of the virus and protect lives.”

Johnson will make a statement to parliament on Tuesday and is also expected to address the nation later in the day on further ways the public can confront the virus, emphasising the need to wash hands, use face coverings and abide by social distancing measures.

“No one underestimates the challenges the new measures will pose to many individuals and businesses,” a No 10 spokesman said. “We know this won’t be easy, but we must take further action to control the resurgence in cases of the virus and protect the NHS.”

Official data has found a trebling of outbreaks linked to food outlets and restaurant settings, and the new regulations involve transferring more of the burden to those running pubs and restaurants, rather than just customers, to obey the rules.

The UK recorded a further 4,368 coronavirus cases on Monday, the second highest daily total since early May and only the third time this autumn the figures had topped 4,000.

Prof Chris Whitty, chief medical officer for England, said the number of deaths directly from Covid could rise on an exponential curve, and added that, unlike during the first wave starting in March, “the seasons are against us, we are now going into the seasons, late autumn and winter, which benefit respiratory viruses and it is very likely they will benefit Covid as they do flu”.

He said the resurgence of the virus should be seen as “a six-month problem that we have to deal with collectively”.

He said it would not be an indefinite problem and that “science will in due course ride to our rescue” – a hint at the progress of a vaccine which Vallance said could be available for a limited number of people by the end of the year, and more widely as soon as spring.

Citing an Office for National Statistics study, Vallance said it was now estimated that roughly 70,000 people in the UK were infected with Covid and about 6,000 a day were becoming infected. He said being infected with Covid previously was “not an absolute protection” and the vast majority of the population was not immune. The antibody response faded over time, he added, pointing to some cases of reinfection.

Vallance said the epidemic was doubling “roughly every seven days”. “There is a simple message: as the disease spreads across age groups we expect to see increase in hospitalisation … which will lead to an increase in deaths,” he said.

He said there had been an increase in positive cases across all age groups, which was not down to increased testing.

Sadiq Khan, the mayor of London, said he had met local council leaders and public health experts on Monday to ask the government to agree new restrictions in the capital. Those included mask-wearing for all hospitality staff and more widespread mask-wearing in all public spaces outdoors.

“Taking firm action now to prevent a deeper and longer lockdown in the future is without a doubt the best thing to both save lives, and protect jobs and our economic recovery,” he said.

Updating MPs in the Commons, Hancock announced one slight easing of the regional lockdowns now faced by more than 13 million people, permitting households in these areas to mix for genuine childcare reasons.

“This covers both formal and informal arrangements,” Hancock said, saying he had been lobbied over the issue by a series of MPs. “It does not allow for play dates or parties, but it does mean that a consistent childcare relationship that is vital for somebody to get to work, is allowed.”

In the Commons however, several Conservative MPs raised concerns about the possible extent of future restrictions. Chris Grayling, the former transport secretary, stressed the social cost of lockdowns, and the difference in infection rates between areas.

“Can I say to him that, given those regional variations, and in the full knowledge of all the pressures he is facing, I do not believe the case for further national measures has yet been made,” Grayling said.

Sir Graham Brady, the chairman of the Conservative backbench 1922 Committee, who is to submit an amendment to the Coronavirus Act due to be debated next week to give parliament more scrutiny of decisions, also spoke in the debate, telling Hancock political judgments would be improved if they were subject to scrutiny.