In some versions of my teenage years I had no poetic ambitions whatsoever. In other versions I have a memory of walking around the village fantasising about being interviewed by Melvyn Bragg for The South Bank Show. He is asking me questions about my groundbreaking yet approachable work and I’m giving him thoughtful and enigmatic answers. The truth probably lies somewhere between the two: I did have hopes of becoming a poet, but they were closer to delusions, along with daydreams about being a professional footballer or an astronaut or David Bowie. I took a geography degree then qualified as a probation officer in Manchester; all that time I was reading poetry and writing a little bit here and there.

The big change came when I started attending a poetry workshop at Huddersfield Polytechnic, a kind of informal night class in the staff bar, to the accompaniment of humming lager coolers and the clack of snooker balls. The poems that came out of those weekly meetings formed the basis of Zoom!, and without Peter Sansom, the poet who ran the sessions, I don’t think I would have progressed as a writer or had enough confidence to submit work to magazines. A guru figure for me, he shaped the development of my “voice” and offered me an image of the kind of poet I could become. 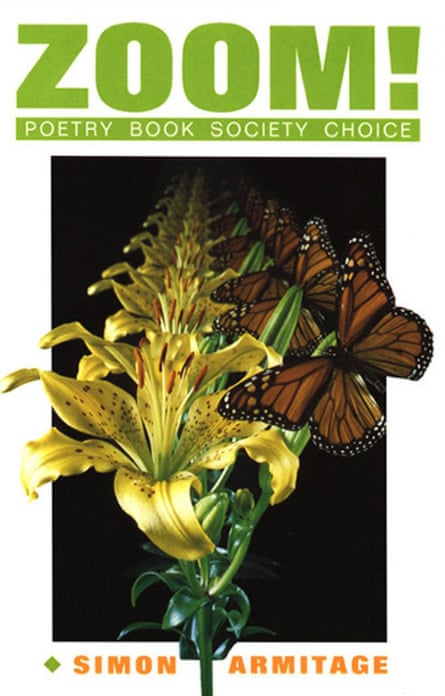 My archives from that period – scruffy and scrawled stanzas, many of them written on the reverse side of Greater Manchester Probation Service official stationery – are held in the Special Collections of the Brotherton Library at Leeds University, catalogued and curated with a dedication that belies their haphazard origins. On those occasions when I’ve revisited them I’ve been filled with nostalgia for a period when I had no realistic expectation of publication and the writing was just for fun. Once you become an “author” and books become your unit of production there’s no going back to that state of literary innocence. According to at least one blurb writer unable to resist the linguistic association, Zoom! “rocketed” me “to poetic stardom”, though four years later I was still hacking around the housing districts of Manchester and treading the corridors of its prisons. A great many of those experiences found their way into the early poems, and even though I denied it at the time (and still deny the idea of poetry as some kind of therapy), it’s probably true that they operated as a release valve, a way of depressurising during weekends and bank holidays, or bringing chaos into a more controlled format of quatrains and half-rhymes.

It was never intended as a manifesto, political or literary, it was simply a portfolio of my interests

And that was the true Zoom! effect: not a journey into cosmologies and outer worlds, but the magnification of everyday life, life as it appeared to a twentysomething in semi-rural West Yorkshire trying to articulate inner landscapes against a backdrop of knackered industries and sweeping moors, using a language and dialect passed down through generations but spiked with the vernacular of postmodernism and post-punk. The poems also embraced the vocabularies of the media, partly as a way of challenging stuffy poetic diction and partly in an attempt to subvert the very forces that tried to con and manipulate us. But like most first collections, Zoom! was never intended as a manifesto, political or literary, it was simply a portfolio of my interests and a product of my ability at the time. Looking back, I think two things: one, I wouldn’t change a word of it; and, two, I couldn’t have done it any other way.

• Magnetic Field: The Marsden Poems by Simon Armitage is published by Faber. Zoom! is published by Bloodaxe. To order a copy go to guardianbookshop.com. Delivery charges may apply.