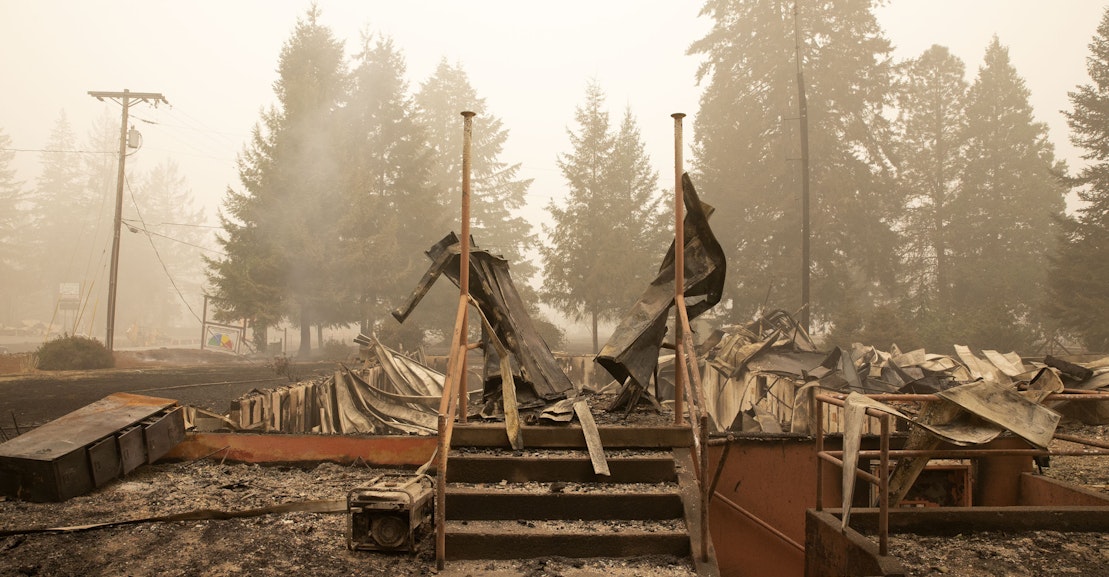 Our office burned down last Tuesday. The little green and white rented bungalow along Route 99 was filled with art, houseplants, laughter, and sometimes tears. It was a meeting place for Latinx youth to have coffee and organize climate justice events in their community. We built folding desks so we could fill the space with volunteers while campaigning against the fracked gas pipeline a Canadian company is trying to ram through Oregon’s forests. Now those walls and desks are all rubble, still hot to the touch.

As part of Rogue Climate, a local climate justice organization with an office in Phoenix, Oregon, we’ve fought for years not just against fossil fuel projects changing our climate but also to demand justice for those in our community most affected by that warming: Latinx essential workers and their families facing hazardous working conditions and Covid-19, low-income rural residents plagued by rolling blackouts, and tribal members watching the salmon runs vital to their diet and culture dwindle in warming rivers.

On Tuesday, the Almeda fire raging through Southern Oregon took out the very base we’ve used for those fights. Many of our staff and volunteers have been evacuated; some have lost their homes. In the past few days, we’ve been out on the streets in the thick, gray smoke, getting food, water, cell phone chargers, hand sanitizer, tents, and blankets to people who have lost everything they owned.

When people say climate change is real, this is what they mean.

Climate change has doubled the number of fires in the West in one generation: Even if the Almeda fire was started by a human, it was fanned by the exceptionally hot, dry, and windy conditions that climate change is producing. Scientists have known about the link for decades. The Environmental Protection Agency warned Congress in 1989 that “the incidence of catastrophic wildfires will increase in U.S. forests with higher temperatures.”

1989 was 31 years ago, before either of us was born. And yet our government has done almost nothing to stop the pollution warming the world and fueling the fires. The fracking and drilling has continued. The CEO of Pembina, the company that wants to run an explosive fracked gas pipeline through our home to the Jordan Cove LNG export terminal, emitting nearly 40 million tons of carbon dioxide a year, took home $7 million in 2018. In contrast, the median household income in Phoenix is $41,753 a year. In nearby Talent, it is $33,244. The fire ran through both towns along Route 99, torching apartment buildings, mobile and manufactured homes. Thousands are unhoused. Two are dead.