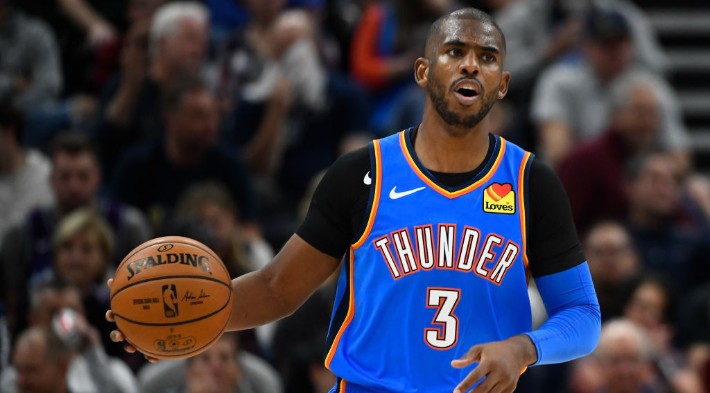 Multiple reports have confirmed that Bucks owner Marc Lasry met with reigning MVP Giannis Antetokounmpo last weekend after the Bucks’ five-game series loss to Miami in the playoffs, but additional details of their conversation continue to flow out. The latest is from Eric Nehm and Sam Amick at The Athletic, who threw water on hopes of a Bucks pursuit of All-Star Chris Paul.

The connection between Milwaukee and Paul was expected once both parties’ seasons ended and it was revealed that Eric Bledsoe could be made available. With a potential hole at point guard and the salaries to make it work, Milwaukee would certainly improve its team by pursuing Paul, but reportedly will not go after him.

From Nehm and Amick:

As for the reported prospect of the Bucks pursuing Oklahoma City point guard Chris Paul as a possible solution to the roster deficiencies, sources with knowledge of ownership’s thinking said it is highly unlikely. The cost of bringing him aboard — Paul is owed $41.3 million next season and has a player option worth $44.2 million in the 2021-22 campaign — and the potential difficulty of bringing Paul onto a roster already led by a strong personality in Antetokounmpo seems to limit the chances of the Bucks moving to pair the two All-Stars. All indications are that the Bucks would rather look elsewhere.

Reporting has also indicated that head coach Mike Budenholzer’s job is safe, so it appears the Bucks could head into 2021 with mostly the same group surrounding Antetokounmpo. At the very least, it seems that they are out of the running for the offseason’s biggest available name. Still, Milwaukee has to look into making some roster upgrades, even if not going for someone like Paul, and all eyes will be on whether the Bucks can do enough to appease Giannis by building a championship squad and keep him around long term.