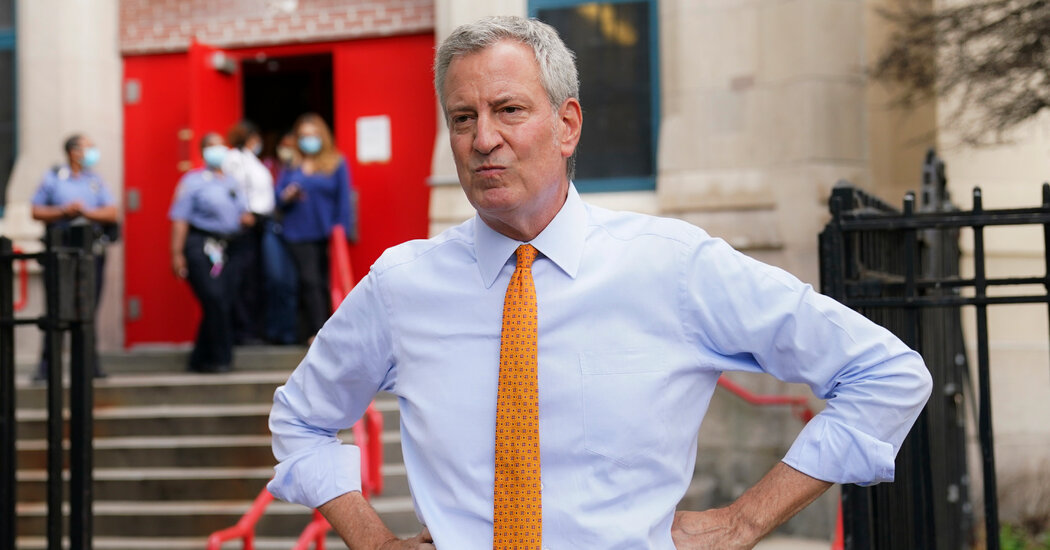 Mayor Bill de Blasio on Wednesday is expected to announce that he is furloughing his own staff at City Hall, himself included.

The policy would affect 495 mayoral staff members, who would have to take an unpaid, weeklong furlough at some point between October and March 2021. The furloughs would apply to everyone from administrative assistants to Mr. de Blasio and the office of his wife, Chirlane McCray.

The mayor intends to work during his furlough without pay, his spokesman said.

Facing a $9 billion, two-year revenue shortfall because of the coronavirus’s impact on the economy, Mr. de Blasio this year closed the city’s budget with $1 billion in unspecified labor savings.

He warned that he would have to lay off 22,000 employees should the unions, working with the city, fail to find such savings; should the state fail to grant New York City the authority to finance its operations with up to $5 billion in long-term debt; or should the federal government fail to provide assistance.

So far, his efforts to convince Albany to act have fallen on deaf ears. So, too, have his pleas for aid from the federal government.

The furloughs would yield $860,000 in anticipated savings, but the move has symbolic implications and could be a precursor to similar maneuvers to slash the budget.

Bill Neidhardt, Mr. de Blasio’s spokesman, described it as “a significant gesture that reasserts City Hall recognizes the sacrifices that will have to be made across the board if we don’t get a stimulus or borrowing.”

Andrew Rein, the president of the Citizens Budget Commission, argued that six months into this crisis, the mayor should have already produced an efficiency plan and work force reduction plan based on attrition, and that labor and management should have already come together to find significant savings.

“It would be great if this helps dislodge that inertia,” Mr. Rein said. “It’s hard to say if it will.”

Originally, Mr. de Blasio warned that layoffs would start in October, but at the end of August, he backed away from that timeline. He has yet to institute a new deadline by which the unions will have to deliver savings and avert layoffs.

In addition to the nearly 24,000 New York City residents the coronavirus has killed, the pandemic has delivered a profound blow to the city’s economy, and the tax revenue on which its budget relies. By July, the city had lost at least 1 million jobs. New York’s Independent Budget Office anticipates that with subsequent job gains tied to New York’s gradual reopening, the city will still have lost 564,200 jobs by year’s end.

Even if the city achieves $1 billion in labor savings, its budgetary problems are far from over.

The budget faces the possibility of $2.3 billion in state education cuts — and an attendant loss of possibly 9,000 education jobs — on top of the likelihood that it will bear much of the brunt of the state’s monumental budget shortfalls. It also includes what experts describe as possibly illusory New York Police Department savings.

Adding fuel to the economic fire, the subway system that underpins the city’s economy is facing a fiscal catastrophe of its own.

Under Mr. de Blasio, the size of the city’s government and its budget have grown dramatically, as have the services the city provides. He often notes that some of that growth is tied to his universal pre-K program, which is widely considered his biggest mayoral accomplishment.