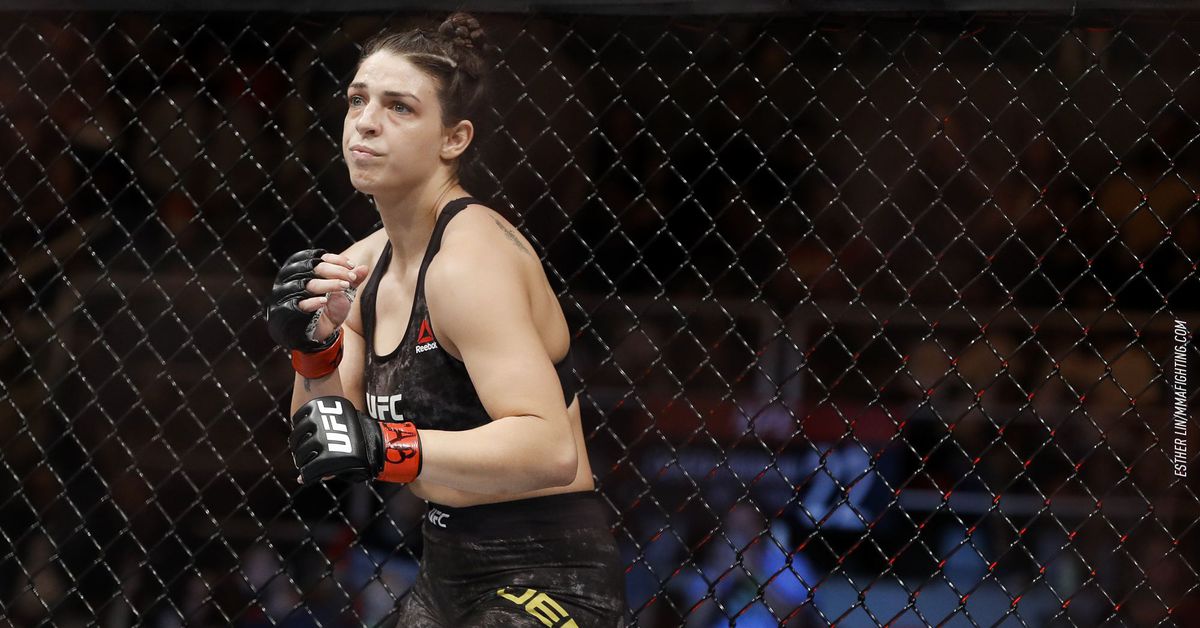 Mackenzie Dern changed teams ahead of her next fight. A trip to her previous gym didn’t exactly result in a warm welcome from one coach.

Until recently, Dern spent time training with the Black House team in Los Angeles, though she’s since partnered up with striking coach Jason Parillo. She described her departure from Black House as an amicable one, with the exception of an incident involving former coach Juan Gomez and her husband Wesley Santos.

Dern isn’t exactly sure what she or Santos did to draw Gomez’s ire, but when Gomez invited them to the gym to talk business the discussion rapidly devolved into fisticuffs.

“My ex-coach Juan Gomez, I don’t know what happened that he called us to go to the academy to talk,” Dern said on the What the Heck show. “I think he was unhappy with a bonus, like money-wise for my last fight. Basically, I always ask my coaches, ‘Hey, during camp, if you have anything, just talk to my husband.’ Obviously, at home me and him talk about everything, so we’re the same person, but when I’m in camp I don’t want to have to think about it. I don’t want to think about money or coaches or anything like that, let’s just talk about training.

“So my husband talked to him. My husband’s like this surfer guy, you know, totally good vibes, afro, definitely not the fighter style. He went to go talk to him and [Gomez] was just like, ‘No, if you want to come to the academy, come to the academy and we’ll talk,’ and hung up. We went to the academy and he just swept dirt onto my husband, pushed him, and my husband pushed him back and they just went into a fistfight. It wasn’t like a brawl, a crazy brawl, it was like a street fight or technical fistfight. Back and forth, my husband’s doing feints, and I’m like, ‘Where’s he learning all this?’ It was so crazy.”

Looking back, Dern can laugh about the story now. Not only was she impressed by her husband’s stand-up skills, the quarrel itself was being cheered on by the students, trainers, and other coaches at the gym.

That includes Dern’s father, Brazilian jiu-jitsu ace Wellington “Megaton” Dias, who did his best to give Westley a few pointers.

“I think they both kind of thought that they were going to separate this fight and everyone’s just kind of like, ‘Hey, one-on-one,’” Dern said. “My dad’s there trying to coach his son-in-law, ‘Okay, turn to your right, you’re doing good.’ And they’re fully fighting and my husband did so good.

“As soon as I saw that my coach attacked my husband, that just finished it for us. I love Black House and everything they’ve done for me, but that coach, I can’t work with that. No matter how much, I don’t know, if you’re mad about it because your bonus wasn’t high enough, you just can’t attack someone. Especially when my husband is so humble with water and he’s like, ‘Can we have that talk that you asked me to do?’ I don’t know what happened. To this day we still don’t know exactly what pushed it to that level.”

Gomez and Black House officials didn’t immediately respond to comment on this matter.

Dern is viewing the camp change as a blessing in disguise, despite the unfortunate circumstances that have forced her to permanently relocate for now. She credits Parillo with taking her striking to the next level, which could be a major factor should her upcoming fight with Randa Markos at UFC Vegas 11 this Saturday turn into a stalemate in the grappling department.

The only person in the story that she really feels bad for is Wesley, though it sounds like her husband escaped any injury. Otherwise, Dern sees the end result as “a blessing in disguise.”

“It’s crazy how much information, how much it’s opened my eyes,” Dern said of working with Parillo. “A totally different style of coaching, of me learning and everything, different energy. It’s really opened my eyes to different things that I was missing, that I was doing wrong, little details that he gave me that helped my striking so much more. I feel way more balanced, I guess not throwing so much, leaning into my punches, I’m way more set.

“Just in training there’s Luke Rockhold and [Marlon] ‘Chito’ Vera and Scott Eastwood and just all these guys out there training, and we’re all just exchanging information and having fun. And coach Parillo’s there just helping me prepare. … It’s just a good energy, it really opened my eyes to so many more things now.”