Hurricane Sally made landfall on the US Gulf coast early Wednesday morning, with pounding rain and winds whipping above 100mph but with the huge category 2 storm system grinding along at just 2 mph – a turtle’s walking pace – increasing the danger of flooding.

The slow-motion storm exhausted residents in Alabama who listened through the night to tornado-warning sirens, phone alerts and howling winds, many frightened, sheltering but also sweltering indoors after power failures, as the storm approached.

As the sun rose on battered Alabama and the Florida panhandle, torrential rain was battering the coast and forecast to continue for up to 12 more hours in parts, accumulating at three to four inches per hour, with wind gusts over 80mph in places.

The slowness also made the storm deceptively dangerous; while spinning in the Gulf of Mexico it gathered rain, which it then unleashed from Louisiana in the west to northern Florida in the east.

Historic, life-threatening flash flooding likely through Wednesday along and just inland of the coast from the western FL Panhandle to far southeastern MS. Widespread moderate to major river flooding will then spread northeastward through the week. https://t.co/VyWINDk3xP pic.twitter.com/nXqcNwMuf9

“Torrential rains continue to batter the coast. Rainfall rates will get EVEN HIGHER when the eye wall of #Sally gets closer to the coast,” the National Weather Service posted to its Twitter account at 11 pm. “CONDITIONS WILL GET WORSE.”

Conditions did get worse overnight.

Before landfall in Alabama, Sally dropped nearly 2ft of rain, spun off multiple tornadoes, and knocked out power at least 50 miles inland, leaving hundreds of thousands of people in the dark. 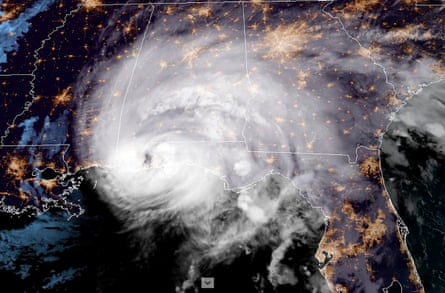 A satellite image shows Hurricane Sally in the US Gulf coast on Wednesday. Photograph: RAMMB/NOAA/NESDIS/AFP/Getty Images

The damage unfolded so slowly, though, that sleepless coastal residents took to social media in exasperation, trading weather details and puns about Sally “slowing her Mustang down”.

“Present conditions are preventing us from answering calls at this time,” police in Orange Beach, Alabama announced at 2.40am. “Please take all measures to be as safe as possible. If you have the option to move to higher ground do so now.”

The storm pushed a surge of ocean water onto the coast. In Mobile Bay, just next to Gulf Shores, five rivers drain into the inlet and the authorities were warning of a potentially devastating flooding situation to come.

Sally’s northern eyewall had raked the Gulf coast with hurricane-force winds and rain from Pensacola Beach, Florida, westward to Dauphin Island, Alabama, for hours before its center finally hit land.

Trees were bending over and flailing around in the howling winds in downtown Pensacola, where driving rain flooded streets up to the bumpers of parked cars.

In downtown Mobile, Alabama, a street light snapped, swinging wildly on its cable.
Nearly 400,000 homes and businesses had lost electricity by early Wednesday, according to the poweroutage.us site. 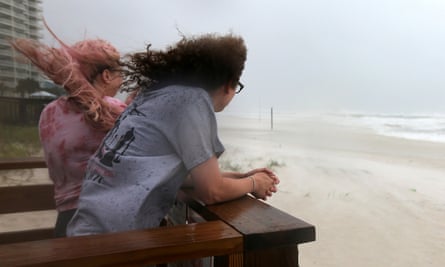 A curfew was called in Gulf Shores due to life-threatening conditions. In the Panhandle’s Escambia county Chip Simmons, the chief sheriff’s deputy, vowed to keep deputies out helping residents as long as physically possible. The county includes Pensacola, one of the largest cities on the Gulf coast.

“The sheriff’s office will be there until we can no longer safely be out there, and then and only then will we pull our deputies in,” Simmons said at a storm briefing late Tuesday.

This for a storm that, during the weekend, appeared to be headed for New Orleans. “Obviously this shows what we’ve known for a long time with storms – they are unpredictable,” said Grover Robinson, Pensacola’s mayor.

Some experts are likening the storm’s slow progression to that of Hurricane Harvey, which swamped Houston, Texas, in 2017. Harvey and Sally came ashore as crawling super-soakers.

Tuesday into Wednesday, low-lying properties in south-east Louisiana were swamped by the surge of water pushed ashore by the wind. 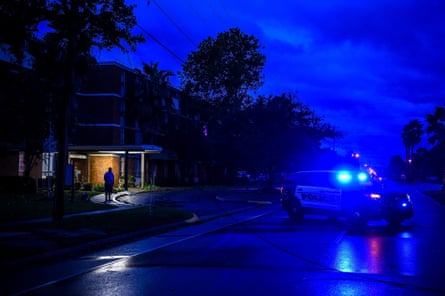 A resident looks at the broken power cable as it lies on the street during Hurricane Sally in Pascagoula, Mississippi on Wednesday. Photograph: Chandan Khanna/AFP/Getty Images

Water covered Mississippi beaches and parts of the highway that runs parallel to them. Two large casino boats broke loose from a dock where they were undergoing construction work in Alabama.

In Orange Beach, Alabama, Chris Parks, a tourist from Nashua, New Hampshire, spent the night monitoring the storm and taking care of his infant child as strong winds battered his family’s hotel room. Their return flight home was canceled, so they were stuck in Alabama until Friday.

“I’m just glad we are together,” Parks said. “The wind is crazy. You can hear solid heavy objects blowing through the air and hitting the building.”

Tate Reeves, Mississippi’s governor, urged people in the southern part of his state to prepare for flash flooding.

As Sally’s outer bands reached the Gulf coast, the manager of an alligator ranch in Moss Point, Mississippi, was hoping he wouldn’t see a repeat of what happened at the farm in 2005, when about 250 alligators escaped their enclosures during Hurricane Katrina’s storm surge.

As Sally tracks inland, more than 26 million people in the south and south-eastern US are under flash flood warnings or watches as Sally was forecast to bring heavy downpours to parts of Mississippi, Alabama, Georgia and the Carolinas later in the week.

Meanwhile, Hurricane Teddy is located about 820 miles out into the ocean east of Barbados and could reach category 4 strength on Thursday.