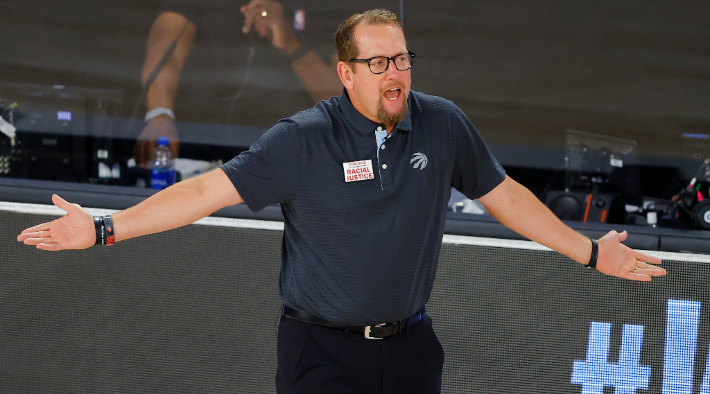 For the second time in three years, a Toronto Raptors head coach has won the NBA’s Coach of the Year award, but this time he’s being rewarded with a contract extension rather than being shown the door.

Nick Nurse, who moved up from assistant to head coach when Dwane Casey was let go three years ago, has agreed to a multi-year contract extension with the Raptors to remain at the helm for the foreseeable future. Nurse is 111-43 in two seasons as the head coach of the Raptors, leading them to a championship in 2019 and an admirable run in defense of that title this year, before falling to the Boston Celtics in seven games in the conference semis.

“Our confidence in Nick just continues to grow, and part of that comes from what we’ve experienced together. The past two seasons have been unlike any other in our team’s history – first, winning our championship, and then navigating a global pandemic and committing long-term to the fight against racism and for social justice,” Raptors president Masai Ujiri said in a statement. “Nick has proved that he can coach on the court and lead in life, and we’re looking forward to accomplishing great things in the future.”

Nurse has been highly regarded for some time, dating back to his time as an assistant in Toronto, and the Raptors now ensure he’ll be the guiding force for the team going forward. What remains to be seen is exactly what this team will look like going forward, as they have some key pieces entering free agency this offseason and the next.

Fred VanVleet, Serge Ibaka, Marc Gasol, and others will be free agents this summer, with Kyle Lowry’s deal running up in 2021. It’s possible the Raptors roster looks fairly different by then, but there will at least be a familiar face on the bench to guide them through a possible transition period.