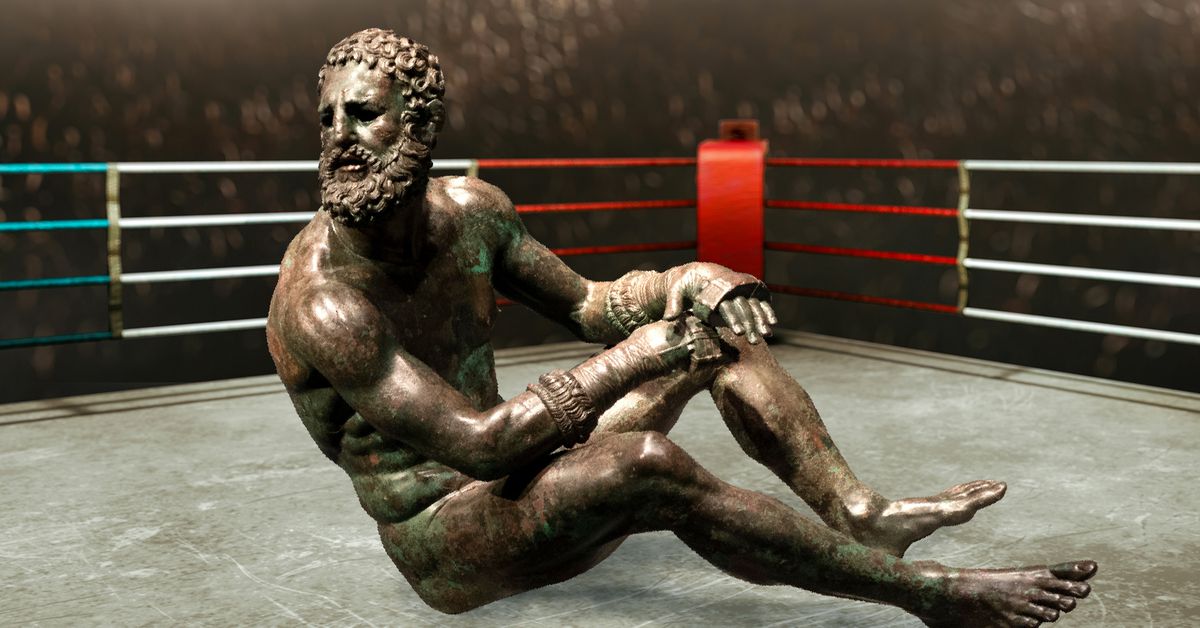 Despite being historically tied to dishonest individuals and/or groups, boxing is a fairly honest sport. It makes no attempt to hide its simplicity. Boxing can be boiled down to just three tenets:

Straightforward enough, but here’s our twist: the boxer historically considered to be the greatest to ever compete in the sport didn’t do the punching part. He also never got punched. But instead of everyone correctly agreeing he was trash since he didn’t even do the boxing part of boxing, people absolutely loved him for it — so much so that the emperor even allegedly took him as a lover. That boxer was Melankomas.

Mel rose to fame in Greece (then part of the Roman Empire) back in the first century AD when it really didn’t take much to become famous. He was a defensive fighter who relied on superior conditioning to avoid his opponent the entire contest. Mel danced around long enough for the unfortunate soul opposite him to get tired as hell. They all eventually said, “no more,” and Mel remained supreme. I want to make it clear: I think conceptually that is awesome, partially because it reminds me of the greatest scene in film history. But the strategy of running away is made even more impressive considering how the sport took place in Ancient Greece. Here are some buff nerds showing how stylistically different boxing was in back then.

It had a lot of hand fighting and posturing, not a ton of direct strikes to the head in the first place, but that video fails to capture a few big things. There was no ring and, most importantly, there weren’t time limits. Mel just bopped around, ducked and dove, outlasted everyone he faced for as long as needed to get them to quit. To hear from someone who saw the boxer do it live, here’s our favorite Roman sports blogger, (Ronnie James) Dio Chrysostom.

“His was beauty of body, his was courage and a stout heart and, besides, self-control and the good fortune of never having been defeated, what man could be called happier than he?”

Now, I understand why those qualities make for an ideal individual, and I am by no means saying Mel was a poor athlete. But I have an issue with celebrating Mel as a boxer. There was zero efficiency in his work, needlessly prolonging a fight as though he didn’t want to tarnish a well-conditioned gimmick. Imagine finally getting tickets to see this dude box only for that to completely derail your Saturday. “I’m sorry babe, Melankomos was trying to set a new personal record so I didn’t have a chance to pick up the lamb for sacrificing or the lamb for eating.”

On paper, I should be able to appreciate Mel. He basically bastardized a combat sport and became really good at not getting punched — an admirable trait for anyone, boxer or not. Boxing has never been up my alley, but a good grift definitely is and it feels like that’s all Mel really did. He took something celebrated and rendered it unrecognizable yet very fuckable (at least to Emperor Titus [allegedly]).

While that’s all very cool, our boy Mel did this by taking something already very laborious and making it even more so. As a boxer, he swung and missed despite never taking a swing. Had Mel wished to actually be a good boxer, I believe he should have learned a thing from the Homer J Simpson school of fighting: throw a single punch to end it all.

Homer’s approach was similar to Mel’s, only instead of dodging punches, Homer ate them all until his opponent wore down. At that point, a well timed strike would send his exhausted foe to the mat. By combining their tactics, you get a boxer who could outlast an opponent, maintain a handsome mug, then just throw one blow and let everyone go home early. Plus it just sounds cooler — a boxer who won every fight, never got punched, and every punch they threw was a knockout.

Instead, Mel simply ran around long enough for his foe to grow tired or bored or a combination of the two. He relinquished all control of the fight and just played an exhausting waiting game. Maybe he would have adjusted as age slowed him down, but he died young (but unpunched!), so we’ll never know what could’ve been.

Every week we’ll be writing up a fun historical sports story that we enjoyed. We find a lot of these while researching, but if you want to make suggestions on a thing you want to read about, let us know in the comments.