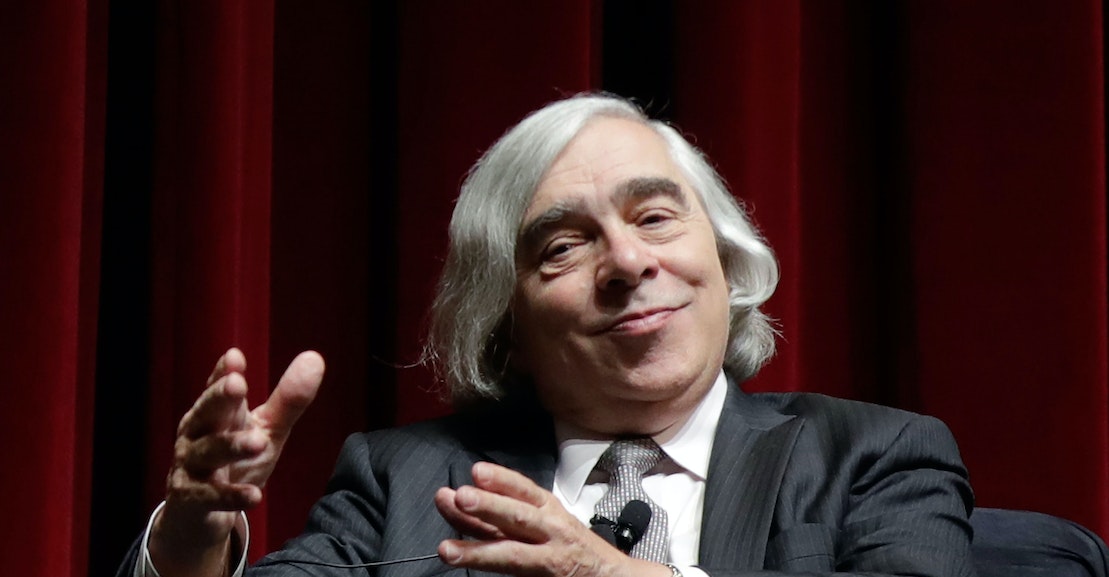 If you haven’t heard of Ernest “Ernie” Moniz, there’s still a good chance you’ve seen a picture of him. The 75-year-old nuclear physicist, MIT professor emeritus, multimillionaire, and former energy secretary for the Obama administration sports longish silver hair that looks fit for a daguerrotype. His aesthetic sensibilities have turned him into a lovable meme among energy wonks, who for the most part regard him as a slightly quirky but eminently competent, whip-smart technocrat, credited as a central figure in negotiating the Iran nuclear deal.

In the last few weeks, this once-improbable figure of controversy has become a symbol of just how much climate politics have changed since the Obama era—a flashpoint in a growing fight over what energy policy should look like in a potential post-Trump government that won’t just be fighting to re-establish the rules and programs he gutted, but transform the country’s energy system in time to avert runaway climate catastrophe. Moniz, a “good friend” of Biden’s, has been informally advising his campaign since at least last May, and his Energy Futures Initiative’s partnership with certain unions has been an influential voice in crafting the former vice president’s and the party’s approach to climate issues. Sources tracking transition talks say he could even be in the running to take back his old job as energy secretary.

That’s a prospect that worries climate watchers. Earlier this month, 145 progressive groups sent a letter to Joe Biden’s campaign, urging the candidate to “ban all fossil fuel executives, lobbyists, and representatives from any advisory or official position on your campaign, transition team, cabinet, and administration.” Many of them say Moniz fits the bill.

Moniz has had several lucrative relationships with fossil fuel companies during his career, including as an adviser to BP. The Energy Initiative he founded at MIT—like many such initiatives in academia, quietly run on oil money—brought in sizable donations from some of the world’s largest fossil fuel producers, and produced research that made the case for their growth. He disclosed his full financial holdings and industry ties when first being considered to head the Department of Energy in 2013, and resigned from any posts that might carry conflicts of interest. Since leaving government in 2017, though, he’s accepted a paid position with a fossil fueled utility whose work he supported at the DOE. Through it all he’s proudly maintained his commitment to an Obama-era energy strategy climate advocates say belongs in history’s dustbin: the “all of the above” approach first outlined in a 2012 speech, which pairs renewables investment with fossil fuel growth. A representative for Moniz said Moniz would not be available to comment on this story.

The typical defense of a once-and-future political appointee’s between-administration industry work is to normalize it. But “it’s not true that everyone came out and worked for fossil fuel companies or that there are not experts on climate without fossil fuel ties,” said Collin Rees of Oil Change International, one of the groups that signed the letter to Biden opposing fossil fuel appointees. Taking money from the fossil fuel industry was a choice, he said—one taken by Moniz as well as fellow Obama administration alums Amos Hochstein, Jason Bordoff and Heather Zichal, who have accepted jobs, payment, or research funding from fossil fuel companies since leaving government. It wasn’t a universal choice, though: “This is not an indictment of all Obama staffers,” he added.