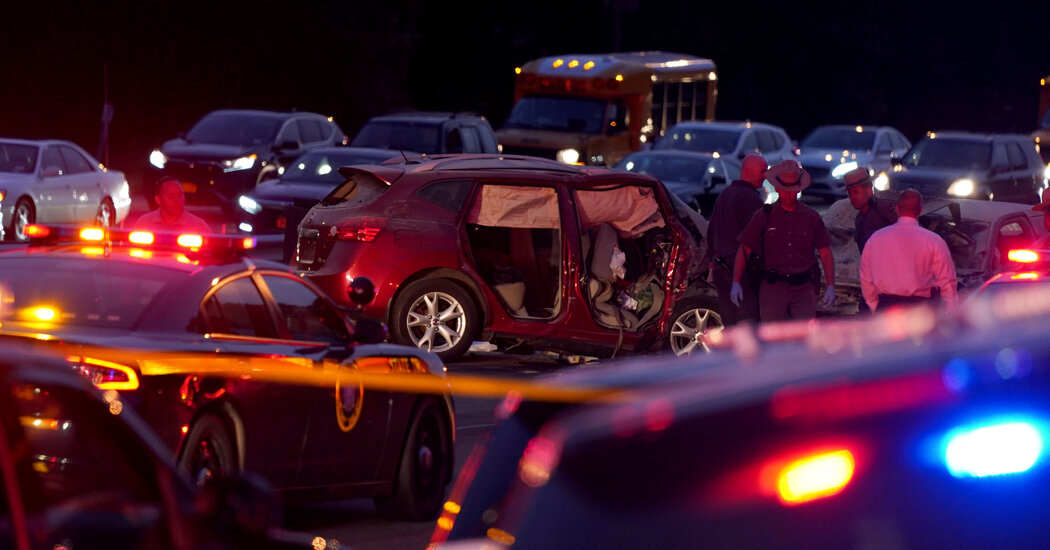 At 5:08 on Tuesday morning, several calls to 911 alerted the police that a car was heading west on the eastbound side of a major highway on Long Island.

Then, just two minutes later, several more callers reported that there had been a head-on collision.

After driving a sedan the wrong way on the Southern State Parkway for less than a minute, the police believe, a man crashed into an S.U.V., killing himself and three people in the other vehicle. A fourth person in the S.U.V. was critically injured.

The cause of the crash, which occurred in Oyster Bay in Nassau County, near exit 29, remains under investigation, Captain George Mohl of the New York State Police said during a news conference on Tuesday afternoon.

But he said the police believe the motorist had entered at an exit less than one mile from the crash site.

The wrong-way driver, in a Toyota Camry, was identified as Marvin Balcaseres, a 33-year-old man from Farmingdale, N.Y.

In the other vehicle, a Nissan Rogue, Ruben Sanchez-Flores, the 67-year-old driver, along with two female passengers, Ivis Sanchez-Cordova and Edith Magana, aged 34 and 56 respectively, died from the collision. A fourth passenger, Nadia Sanchez-Cordova, 44, sustained serious injuries and was transported to Nassau University Medical Center, the police said.

The driver and passengers in the Nissan were from Hempstead, N.Y., and were believed to be traveling to work.

Another S.U.V. attempted to avoid the crash but collided with the wrong-way sedan. The driver of the third vehicle, who was traveling alone, was uninjured, the police said.

In addition, a motorcyclist who was also attempting to avoid the crash sustained non-life-threatening injuries after hitting debris from the accident.

Captain Mohl said the crash led to a “chaotic scene” as smoke and flames streamed out from the site, and engine oil and pieces of the wreckage were spread across lanes. The Southern State Parkway was closed in the area early on Tuesday because of the crash, but lanes were reopened about five hours after the collision.

Numerous fatal accidents and near-crashes have occurred on the roadway over the past few years, and one particularly treacherous stretch — which includes the area where Tuesday morning’s crash occurred — is known by some locals as “Blood Alley.”

In 2012, a 17-year-old boy who was driving with a learner’s permit slammed into a set of trees after losing control of his car on the highway. The vehicle split in two and four 18-year-old passengers died. Almost three years later, a father and his two children were killed when their car was rear-ended by a man who was later charged with driving while intoxicated. And in 2018, dozens of Long Island high school students were injured after their charter bus struck a bridge overpass, shearing off much of the roof.

Experts have noted that the Southern State Parkway’s structure was designed for a time when fewer vehicles were traveling at slower speeds. In response to the string of accidents, Gov. Andrew M. Cuomo signed a bill in late 2018 giving the New York State Department of Transportation two years to study the highway’s exit and entrance ramps and provide recommendations on how they could be improved.

Assemblywoman Michaelle C. Solages, who sponsored the bill, said on Tuesday that she has heard concerns about the roadway, “one of the most dangerous parkways in the state,” for years. She called on the department to speed up the results of their study and to install technology in the hope of reducing accidents.

“We just want to make sure this study is done and finalized immediately, because it can’t wait,” Ms. Solages said. “There’s a human toll to this. We’re not talking about facts and figures, we’re talking about people who are critically injured or dying.”