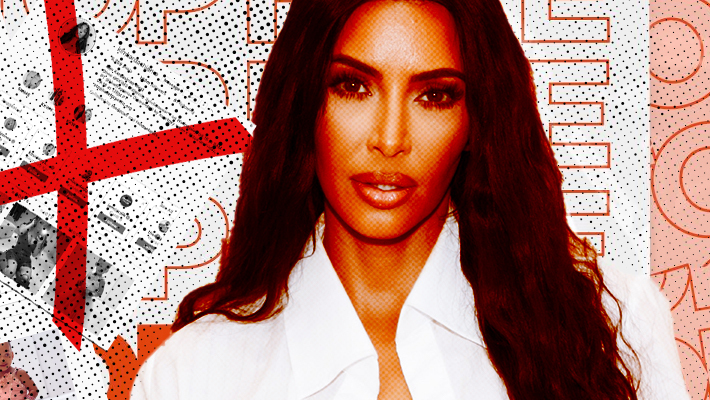 While Kanye West tweets seemingly-indiscriminately about… whatever the hell he’s tweeting about these days, Kim Kardashian West continues to use her platform to bring awareness to serious modern-day issues — from wrongful imprisonment to the spread of disinformation, propaganda, and hate that has found a home on platforms like Facebook. In a tweet posted today, Kim announced that she’d be freezing her Instagram and Facebook accounts tomorrow as part of the #StopHateForProfit campaign, joining other celebrities like Sasha Baron Cohen, Orlando Bloom, and Leonardo DiCaprio.

I love that I can connect directly with you through Instagram and Facebook, but I can’t sit by and stay silent while these platforms continue to allow the spreading of hate, propaganda and misinformation – created by groups to sow division and split America apart pic.twitter.com/XkxzABn7qw

“I love that I can connect directly with you through Instagram and Facebook, but I can’t sit by and stay silent while these platforms continue to allow the spreading of hate, propaganda, and misinformation — created by groups to sow division and split America apart,” tweeted Kim to her 66.7 million followers. #StopHateForProfit is a coalition with support from over 1,200 businesses and non-profits, as well as consumers, that are attempting to make Facebook accountable for the way it handles racism, disinformation, and hate on its platform.

– only to take steps after people are killed. Misinformation shared on social media has a serious impact on our elections and undermines our democracy.  Please join me tomorrow when I will be “freezing” my Instagram and FB account to tell Facebook to #StopHateForProfit.

This year brought increased calls to boycott Facebook from both users and advertisers, as the platform continues to grow as a breeding ground for misinformation and hate speech. Just yesterday, Buzzfeed News reported that Facebook either ignored or was slow to act on evidence that fake accounts on its platform had been working to undermine elections and political affairs around the world, according to a 6,600-word memo written by a former Facebook data scientist.

While some Twitter users congratulated Kim Kardashian West on the move, a few noted the irony of Kim’s call in the face of Kanye’s presidential run, which many see as a distraction meant to benefit Trump’s reelection.

This is big. Thank you for speaking out. 👋👋👋

Thank you for using your platform for good, Kim Kardashian~ anyone who says she needs to talk to her husband at home needs to check their sexism and pull their heads out. SHE is doing the right thing. Period.

It’s not only happening in America, Facebook is being used in India as a tool to propagate hate and vilify minorities. It is filled with hate speeches which lead to serious outcome, yet still Facebook doesn’t budge.

Stop your husband being played by the Republican Party as an election disrupter. If you care then start here.