It is just a year since Danh Vō’s two interrelated London exhibitions. Now he is back in the city with a show whose tenor is quieter, more reflective, somehow almost pastoral: except that the disquiet in Vō’s art never goes away.

Partway through the current exhibition I found myself on my hands and knees, surrounded by huge felt tubs and ad-hoc, artful planters filled with grasses, ferns and other plants I mostly couldn’t identify, the smell of damp loam in my nose. Among all this unexpected greenery I was trying to look inside a glass-walled refrigerator unit within which a pair of legs dangle, one foot crossed over the other in the position of the crucified Christ. On top of this unit, in a second vitrine, sits a Greco-Roman marble male torso. From a distance, legs and torso seem to form a single headless figure. The legs look unnervingly like refrigerated human body parts. Flesh or not flesh? Up close, I discover that the toenails are gilded in gold. Later, I learn that the legs are cast from Vō’s partner. The work is called Beauty Queen.

As for all these delicate ferns and grasses, the masses of flowering daisies and chamomiles, they remind me of Albrecht Dürer’s famous 1503 watercolour of a patch of turf, not simply a study in realism but a study of God’s purpose, even in the smallest and least regarded of things, the profusion of differences and cohabitation. Dürer, for what it is worth, was probably gay. How the mind takes flight. 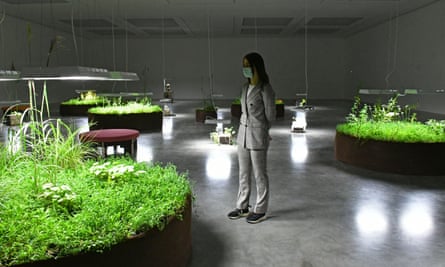 Vō’s latest exhibition is titled Chicxulub, the town on the Yucatan peninsula in Mexico that gave its name to the enormous impact crater of an asteroid or comet that killed most of the earth’s plant and animal species 66m years ago. It wiped out the dinosaurs. This is already almost too much to be getting on with. Vō, I think, alludes to this evolutionary cataclysm as a metaphor for the collapse of human empires, and our looming ecological disaster. He also provides us with a timeline that runs from Alexander the Great’s sacking of Persepolis, capital of the Achaemenid empire, in 330BC, to the dropping of atomic bombs on Hiroshima and Nagasaki in 1945, signalling the end of the Japanese empire and ushering in the age of the bomb.

The show is filled with disconcerting, captivating and lovely moments, with feet and flowers, fires, fragments and ruins

All those empires and their ends, their supposed heroes and their putative villains: the Romans defeated by the Goths at Ravenna, the end of the Gupta empire in the Indian subcontinent, the first Muslim civil war, the end of the Tang dynasty, Constantinople’s fall to the Ottomans, the fall of the Aztec and Incas to the invading Spanish. The list goes on, taking in the Reformation, the Russian revolution, the slow decay of the British empire and the rise of America. This roll-call of empires and dynasties appears only in text form, which visitors can download in the exhibition, though they are alluded to, obliquely, in some of the works on show. Or, at least, the timeline provides a backdrop that somehow infects the exhibition with rumbling threat. As if we weren’t living with that already.

History lessons, or at least the presence of the past, are tangible and physical as well as metaphoric here. Vō’s personal history is in here, too, in a show filled with disconcerting, captivating and lovely moments, with feet and flowers, fires and fragments and ruins. There is nothing innocent in the world, or nothing, at least, that does not provide a link in an endless chain of associations, whether it is a pack of American Spirit cigarettes, perched on a little shelf, or a gilded cardboard crate for Coca-Cola bottles, or another wooden crate that once held Johnnie Walker whisky. Some crates have truncated body parts and plaster putti, or a marble head of Christ, cut down and stuffed neatly inside them, like a series of grisly but careful body-in-the-trunk murder scenes. And there are body fragments everywhere – ancient Roman marble panther legs, bits of a 19th-century German sandstone eagle, more feet, bits of gilded architectural reliefs, panes of religious stained glass. 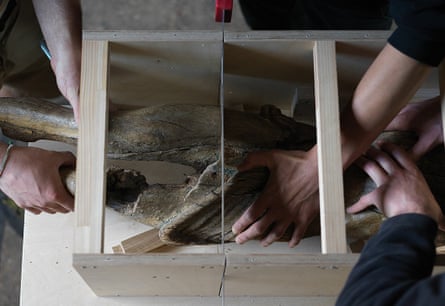 One gallery is dominated by a mossy old apple tree crowned with mistletoe, its severed limbs re-attached to the trunk, the fruit still hanging from its propped-up branches. It stands beneath a bronze, 16th-century Spanish figure of Christ hung high on the wall – the tree with its associations of the Garden of Eden and the fall, the mistletoe with its pre-Christian symbolism of fertility and health, the white fruit and seeds resembling semen. Vō’s argument with Catholicism is never far away.

Another gallery is lit by the glow of several wood-burning stoves, like the ones Vō has in his studio on his farm outside Berlin, whose chimneys cross the gallery walls and ceilings before venting the smoke outside. Hanging, screen-like Isamu Noguchi lamps soften and divide the space. Comfortable circular benches here and there allow you to stop and think, giving an air of domesticity and safety. This sense of welcome and pause allows us to think of the galleries as places of comfort and respite from the raging world.

A dangling UV lamp illuminates a 15th-century walnut Madonna and Child, around which grows a flowering nasturtium. The Virgin stands on a bronze age axe head. I think of the wood and the axe that felled the tree, before the sculpture was carved. I think of violence and creation. There are nasturtiums everywhere in the show, potted in fragments of a Roman sarcophagus and in a bit of Flemish relief work, rooted in humus and twining about ancient marble fragments. Brought to Europe following the conquest of South America, nasturtiums reminded the Swedish botanist Linnaeus of the Roman trophy poles on which an enemy’s shields and bloodstained helmets were hung. Bloodied trophies then, from the New World, pretty souvenirs of death and conquest. 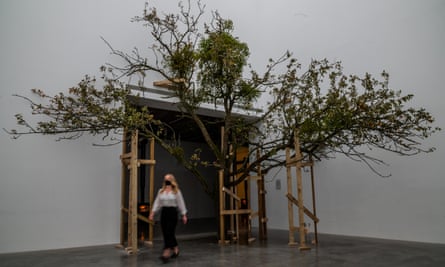 Vō’s argument with Catholicism is never far away … a mossy old apple tree crowned with mistletoe, its severed limbs re-attached to the trunk. Photograph: Guy Bell/Rex/Shutterstock

Some elements recur in exhibition after exhibition of Vō’s work, as leitmotifs of his preoccupations – principally capitalism and colonialism, Catholicism and sexuality. The photograph of hopeful young 19th-century French missionaries about to set off on their ministries; the letter one of them wrote to his father, the night before his decapitation by the Mandarin authorities, and copied out by hand by Vō’s own father; the photograph of Queen Victoria’s pet Pekingese, Looty, presented to her by the conquering British army who stole it from the Summer Palace in the siege of Beijing; the wooden crates, seats, fragments. Every show adds something new, develops a theme or recasts what we think we know.

Beside the lighted stoves are boxes of kindling and neatly arranged logs for the fires. Every day the logs are replenished from a huge American flag made of stacked timbers, their cut grain end-on, which reaches from floor to ceiling in the largest space. As the show goes on, the flag will get smaller. By the end there will be nothing left. It is no coincidence that the exhibition will close on the eve of November’s US election.