Dominic Cummings, Boris Johnson’s chief adviser, has been photographed arriving at Downing Street carrying a copy of a 1986 letter about the importance of modernising defence infrastructure.

Cummings was pictured on Tuesday morning carrying the document, uncovered, largely visible and facing the cameras, suggesting he intended for it to be seen.

The letter, from February 1986, was written by Bernard Schriever, a then-retired US air force general who had been one of the leading proponents of modernising the US’s military, especially its ballistic missiles.

It was addressed to David Packard, the co-founder of Hewlett-Packard, who at the time was chairing a commission set up by then-president Ronald Reagan to examine spending and governance within the US defence department. 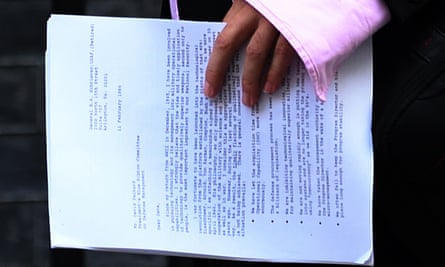 The letter was addressed to David Packard, who was then heading a group examining US defence spending. Photograph: Stefan Rousseau/PA

The letter brandished by Cummings is an apparent plea by Schriever for continued investment in weapons technology, which the former general said was, after personnel, “the most important ingredient to our national security”.

Cummings is on record as admiring the work of Schriever. In a 2 January post on his personal blog, which called for “weirdos and misfits with odd skills” to consider working for the government, he cited Schriever’s work on intercontinental ballistic missiles among examples of “phenomenally successful practical managers”.

In July, it emerged that Cummings was to visit a series of sensitive Ministry of Defence sites, at a time when the government is carrying out a review of defence capabilities.

On Monday, defence secretary Ben Wallace set out plans for the review by saying he believed hostile countries had “adapted far more quickly” than the UK to the changing world of conflict.

Wallace said the review would create an armed forces who were “fit for tomorrow’s battles, not fighting yesterday’s”.

The chief of defence staff, Gen Sir Nick Carter, added that the UK’s opponents “no longer distinguish between peace and war, between foreign and domestic policy, or, for that matter, between public and private”.