Apple has announced two new versions of its popular smartwatch, a new top-of-the-line Watch Series 6 and a cheaper Watch SE.

Unveiled as part of a online-only event, as the world’s largest firm attempts to continue business as usual during the global Covid-19 pandemic, the new smartwatches continue Apple’s push into health tracking.

The new Watch Series 6 has a similar square design and always-on screen to its well-received predecessor and comes in two sizes and a range of materials and colours. It has a 20% faster S6 processor and a screen that’s 2.5 times brighter when outside and not actively being used. 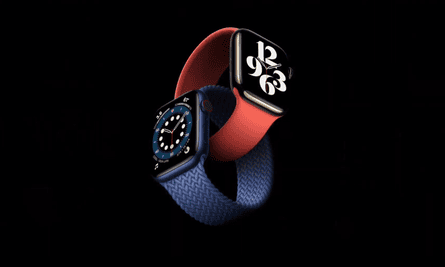 In addition to the electrocardiogram (ECG) heart monitor added last year, the new Watch Series 6 can now measure blood oxygen saturation (SpO2). Together with a new sleep tracking system that is part of the WatchOS 7 software update, the new sensor can highlight common breathing disturbances in the night, something rivals from Garmin and Withings already do.

Blood oxygen saturation can also be used to track general respiratory health, which has been thrown into the spotlight by both Covid-19 and the wildfires in the US. 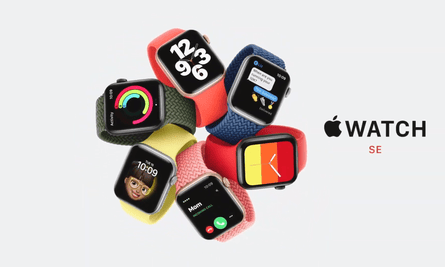 The cheaper Apple Watch SE is essentially a revamped Series 5 from 2019. Photograph: Apple

The new, cheaper Apple Watch SE sits above the the Series 3 from 2017, which still remains on sale as the firm’s budget smartwatch. The Watch SE has the same sized screen and runs the same software as other Apple Watches with most of the same features, but uses the S5 processor from the Series 5.

It is designed to fend off competition from cheaper smartwatch and health-tracker makers, such as Fitbit, Withings and Samsung’s Galaxy Watch Active series.

The Apple Watch has dominated both smartwatch and traditional watch sales over the last few years, eclipsing the entire Swiss watch industry in 2019. It has become an increasingly important part of Apple’s revenue, providing another avenue for sales to those who are keeping their iPhones for longer as part of the firm’s wearables category, which includes the AirPods Bluetooth earbuds.

Watch OS 7 includes new sleep tracking functions, as well as new wellness modes such as Wind Down that attempts to reduce distractions as you head into the evening. It also brings with it new watchfaces and the ability to share your personalised watch faces with other Apple Watch users.

Apple introduced a new system that allows parents to bind a child’s Apple Watch to their iPhones called Family Setup. It also allows them to track their location and set parental controls.

Apple usually launches new iPhones in September but announced at its last earnings call that due to production delays related to Covid-19 new models would be delayed by a month.