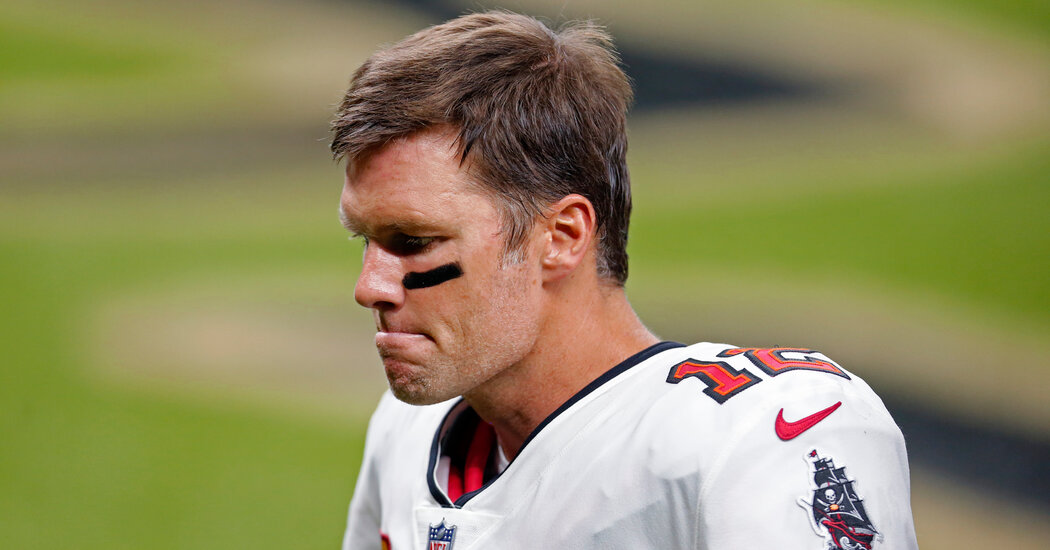 Forget celebrating the return of N.F.L. football by lauding Julio Jones’s hands, Christian McCaffrey’s legs and Lamar Jackson’s arm. Let’s celebrate it in a more ghoulish, and maybe pettier, way by looking at the players and teams who didn’t fare so well.

Some of the teams that acquired new passers weren’t feeling so great on Monday morning.

Tom Brady arrived in Tampa, Fla., on a wave of enthusiasm, but carrying his age, 43, along with those six Super Bowl rings.

A game in New Orleans is not the easiest baptism, but his performance was lackluster: 23 for 36 for 239 yards with two interceptions, one of them a pick-6. Brady was soundly outplayed by the youngster Drew Brees, 41, and the Buccaneers lost, 34-23.

Brady and Buccaneers Coach Bruce Arians on Sunday acknowledged that Brady was at fault on the picks. “I made some just bad, terrible turnovers,” Brady said. “I obviously have got to do a lot better job.” (Arians on Monday pointed a finger at receiver Mike Evans for the first interception.)

Philip Rivers, 38, has always been a yards machine (nearly 60,000 in his career), and he got 363 more on Sunday with the Indianapolis Colts, his new team after 16 years with the San Diego and Los Angeles Chargers. But the Colts couldn’t pull away from an unfearsome Jacksonville Jaguars team that they were expected to beat by 8.

Rivers had chances to win the game late, but threw an interception with four minutes left. Given a final opportunity, he led his team to the Jaguars’ 26 with a minute left, then threw three straight incompletions, and the Colts lost, 27-20.

Two Quarterbacks Looking Over Their Shoulders

Rivers’s replacement in Los Angeles, Tyrod Taylor, got a win, at least. But it was against the lowly Cincinnati Bengals, who were playing behind the rookie quarterback Joe Burrow, and it came by just 3 points. In a game that was poorly played by both sides, Taylor was an uninspiring 16 for 30 for 208 yards. There have already been calls to replace him with the first-round pick Justin Herbert.

As the Brady-less New England Patriots were startling their fans with a quarterback, Cam Newton, who ran for 75 yards and threw for only 155, Ryan Fitzpatrick was throwing three interceptions for the Miami Dolphins, who lost, 21-11. Fitzpatrick’s adjusted yards per pass figure was an anemic 1.9, comfortably the worst in the league.

With the Dolphins unlikely to be sensational this year, fans may be clamoring for the rookie Tua Tagovailoa sooner rather than later.

The Guy Who Traded DeAndre Hopkins

When the Houston Texans traded DeAndre Hopkins and a fourth-round pick to the Arizona Cardinals for David Johnson and a second- and fourth-rounder, plenty of people said it was a bad trade. After Week 1, “bad” doesn’t seem bad enough to describe the inequity of the swap.

Kyler Murray connected with Hopkins 14 times for 151 yards, and the Cardinals, 6½-point underdogs, won at San Francisco. It was a career high in receptions for Hopkins. (It’s a good thing, too, because Murray didn’t really play that well otherwise.)

At least Johnson was OK for the Texans on Thursday in a loss to the Chiefs, rushing 11 times for 77 yards.

Maybe just lock this one in for the rest of the season.

Most of Sunday’s games were fairly close. And then there was the Browns game.

Cleveland lost to the Ravens, 38-6. Quarterback Baker Mayfield managed only 189 yards in the air, and the Browns never looked competitive.

Yes, they were facing one of the best players in the game, the reigning most valuable player, Lamar Jackson, who completed 20 of 25 passes for 275 yards and three touchdowns. But at least some of that success came because of Browns defensive lapses.

The Browns have often been the butt of jokes, but when this season began, there was at least some optimism, thanks to running back Nick Chubb and hopes for improvement from Mayfield. The Browns were at least rated above the league’s potential laughingstocks like the Jaguars, the Bengals, and um, “Football Team.” Some went so far as to predict a .500 season, or better.

After a schooling by a very strong team, the Browns may be resetting expectations.

Kansas City’s Clyde Edwards-Helaire was the only running back taken in the first round of the draft, with the last pick of the round. He justified the selection with a 138-yard game on Thursday night. Could it have been the start of a renaissance for the running game?

No. Although several runners got into the 90s on Sunday, not one hit the 100-yard mark.

In last year’s opening week, five rushers ran for 100. Season long, there were 108 100-yard games, an average of more than six a week.