As the UK faces a potential second wave of the coronavirus, care homes across the country have started to restrict visits to protect their elderly residents.

But the limits are causing heartache for relatives, some of whom have spoken of their grief at not being able to visit family members, even in the final days of their lives, with some only allowed one visitor for half an hour per fortnight.

In Norfolk, Anna Hemp and her family are mourning the loss of her grandfather Alan Sigsworth, 91, who died on Saturday from natural causes, with only one member of his family able to see him for a 30-minute period before his death – which a doctor had warned could happen within days. 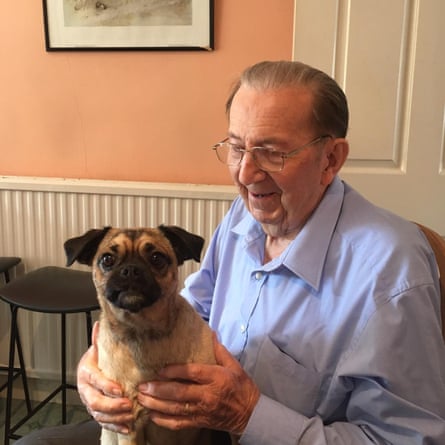 Alan Sigsworth with his grand-daughter’s dog at his home in Norfolk, in 2019. Photograph: Guardian Community

“We were permitted one half-hour visit by one family member to say goodbye; my uncle was not even allowed to touch his hand even after sanitising,” said Hemp.

“I’m a biochemistry graduate, I understand the risks involved and that care homes have to be on the safe side. But this seems like an overreach. Saying goodbye to someone on their death bed is sacred.”

Alan had dementia for about a year and deteriorated severely during lockdown as he was unable to maintain his routine and social activities, Hemp said. Only one family member was allowed to visit him for 30-minutes each fortnight over recent months. Hemp’s mother was also able to visit him on his death bed, but only in her capacity as a priest.

“It did frustrate us because there was a door onto the garden from his room, we paid extra for that originally, so there was no need to go into the care home,” Hemp said.

“And by that point he was in bed all the time, we didn’t see why we couldn’t go in. It has felt so sudden and it has been very hard not properly saying goodbye.”

Since new restrictions were introduced at the beginning of September, Sandra has only been able to see her 90-year-old mother Eve, in her care home in Hull, once a week, for half an hour, from behind a perspex screen and wearing PPE. Sandra said she has watched her mum, who has Alzheimer’s, decline over recent weeks. “Previous to this, she was a lot more alert and knew who I was,” she said.

“The last time I saw her on Saturday, I had nothing from her. There was no speech, her eyes were closed, she’s shrinking into herself, it’s heartbreaking.”

Sandra and her six siblings managed to celebrate Eve’s 90th birthday in May after lockdown restrictions eased but now only one family member is allowed into the home.

Prior to lockdown she visited four times a week and would wash her mother’s hair and do her nails but now, she’s worried that introducing such strict measures will affect her mother’s health. 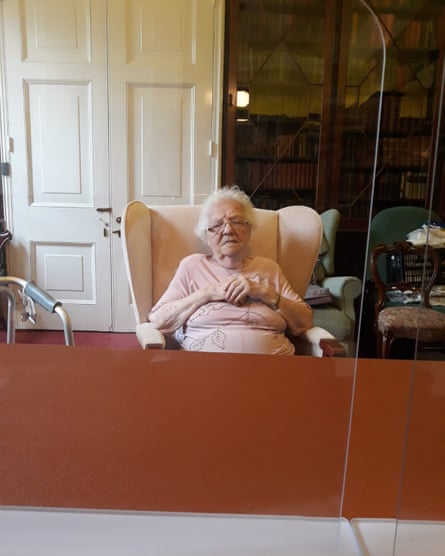 Eve behind a perspex screen in her care home in a photo taken by her daughter. Photograph: Sandra/Guardian Community

“I think the care homes are frightened to death,” she said. “I can understand why they’re being so protective but I think it’s so far over the top. They’re not going to die from Covid, they’re going to die of loneliness.”

“I just want to give my mother a hug and now I can’t get close enough to her to say ‘we still love you mum’, and if she dies, I won’t forgive myself.”

In West Sussex, 87-year-old Susan* can only receive one visit in the garden from someone wearing a mask, two metres apart for half an hour every fortnight. She had a stroke three months ago, and her family members could visit her in hospital every day.

“My mother is bed ridden and alone all day every day except for when the nurses attend to her,” said Charlotte, her daughter. “She has become extremely depressed and cannot understand why we can’t visit her. Her mental health has plummeted and she has been prescribed anti-depressants. She feels abandoned and ‘in despair’ and that ‘this is no life’.

“I have no doubt she would rather risk getting Covid-19 if it meant she could see her family – her only joy in life. The impact this has had on the family has been devastating. One day we will look back with shame on how the government has treated the elderly in care homes and lessons will be learned.

“The government guidelines are wrong, they are not protecting the elderly, they are inflicting on them a life of loneliness, isolation with no human warmth and love. My mother hasn’t seen a face without a mask since the middle of June.”

Charlotte, whose mother pays in excess of £50,000 a year for her care and accommodation, said the fundamental nature of for-profit care homes raises serious questions. “I believe this particular care home is much stricter than others because they lost a lot of residents to Covid. They are a business, they want to make money; if their residents are dying they’re losing money.”

She added: “I saw her last Wednesday for half an hour, after which time I was kicked out. I could’ve been there for two hours, they’ve got a big garden, it was a lovely day, there’s lots of seats. I now won’t see her for another six weeks as my brother and sister want to see her.”

* The name has been changed to protect the individual’s identity